Cardano has in the past couple of weeks been performing exceptionally well. At the beginning of the month, ADA was trading around $0.043. Through continued growth in the last couple of weeks, ADA has climbed from this to hit a 2019 year high of $0.068 at the time of press. The incredible performance has further seen the coin’s market cap step up in ranking.

The last couple of days, which have seen the coin surge drastically, has seen ADA get back to top ten ranking, overtaking Tron which was tenth. With ADA now $200 million away from Tron, ADA looks set to permanently establish its place in the top ten.

Fueling the recent rally is a number of developments from Cardano. These developments have ranged from the release of Cardano 1.5 update, CoinMarketCap.com giving it an A rating, to the integration of ADA and Yoroi wallet on the Ledger Nano S as we have reported in the last couple of hours. 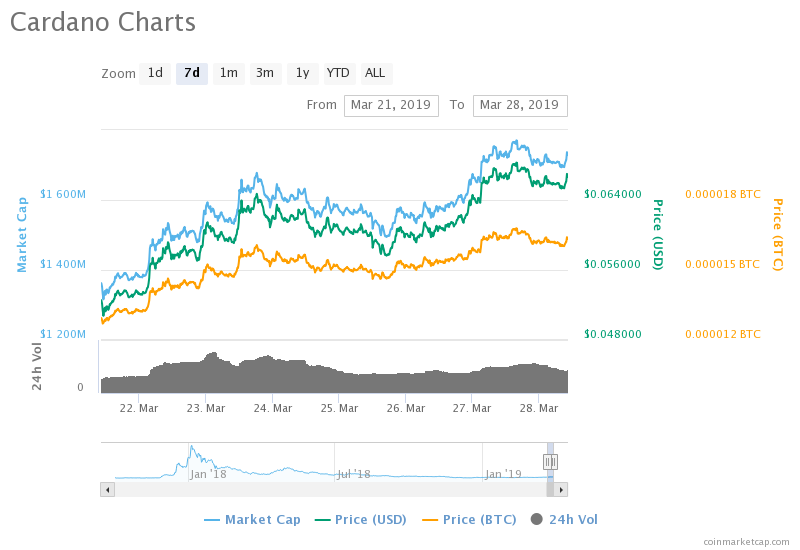 With the market experiencing a new wave of green, we expect to see more gains from ADA. At the time of writing, ADA is up by around 2% and exchanging for around $0.067. With gains expected to extend to the weekend, ADA looks set to hit $0.070 and experience strong resistance from around $0.075 all the way to $0.080.

Recent developments around the project have been long due. The year 2019 is looking to be the year that the project makes up for the drag. A lack of direction from what has always been an incredible team has seen investors leave ADA. Now, renewed optimism around the project is seeing many investors come back and driving prices high.

In the coming weeks, Cardano is expected to move to its Shelley phase where the platform will become fully decentralized, fully embracing its potential. This is expected to be a key and pivotal point for the Cardano project and its native token ADA. In the weeks to come, a successful launch of the Shelley phase would see ADA probably test the $0.1 position.