In recent days, we have been reporting on Cardano’s upcoming upgrades and developments. Now, the project has taken a major step towards realizing its full potential of being decentralized. The project in the last couple of hours has launched the Cardano 1.5 update on its Mainnet.

This is expected to be the last development before releasing the highly anticipated Shelley update, which will see the project become fully decentralized. The launch of the Cardano 1.5 update has not only signified the crossing of a major milestone but has also seen the project’s native coin [ADA] surge in value.

Beginning early in the day, while most coins were relatively bearish, ADA began recording substantial gains of up to 5%. At the time of press, ADA has extended these gains and is soaring by well over 10%. 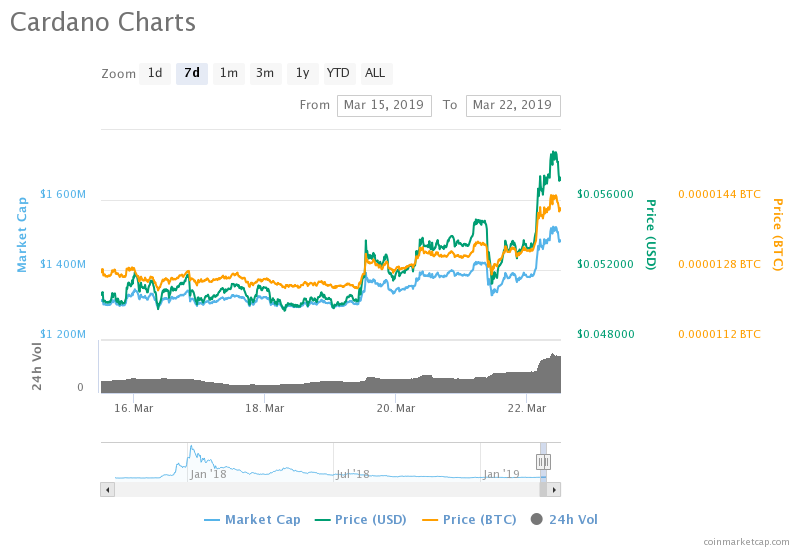 ADA is now exchanging for $0.057303, with $0.058 now its immediate target. In the last couple of days, a continuous upward trend has seen the coin break some key resistance positions. Up until yesterday, ADA had not managed to climb above the $0.054 price range. Now, it has managed to do so and created a great margin. This possibly allows it to set a higher support position, one likely above $0.052.

This recent rally has further seen the coin come close to getting back into the top ten cryptocurrencies. At the time of press, ADA is less than $50 million short of reaching Tron, which is currently tenth in the market. A few more hours of gains for ADA and we could see ADA overtake Tron, which in recent days has been slow in price movement.

With most coin around the market turning green at the time of press (after a slow start to the day), we could see ADA soaring and reach as high as $0.060 during the weekend. This momentum is also expected not to slow down in the short term as the hype around the release of the Shelley update grows.