In recent days, the Cardano project has been making headlines. The headlines have come in light of both network developments and its native token posting some significant numbers. In the last 24 hours, ADA has once again become the topic of discussion as the coin has continued its trend by recording some gains.

With most of the top coins recording marginal losses in the last couple of hours, ADA has resisted this bearish pressure and soared by over 6% at the time of press. This has since seen the coin trade above $0.053. Yesterday the coin rallied as high as $0.054 but met resistance that saw prices drag back to around $0.051. The surge today could soon see the coin retest the newly established resistance position.

Cardano’s recent developments and native token performance have not only caught the eye of investors. CoinMarketCap.com which rates coins through the Fundamental Crypto Asset Score (FCAS), has given Cardano an A, meaning it is in its prime time. The FCAS measures User Activity, Developer Behavior, and Asset Maturity.

Although investors will mostly make investments based on price behavior, the FCAS goes beyond this and helps investors understand more fundamental issues about cryptocurrencies and help them make smarter investment decisions especially for the long term. 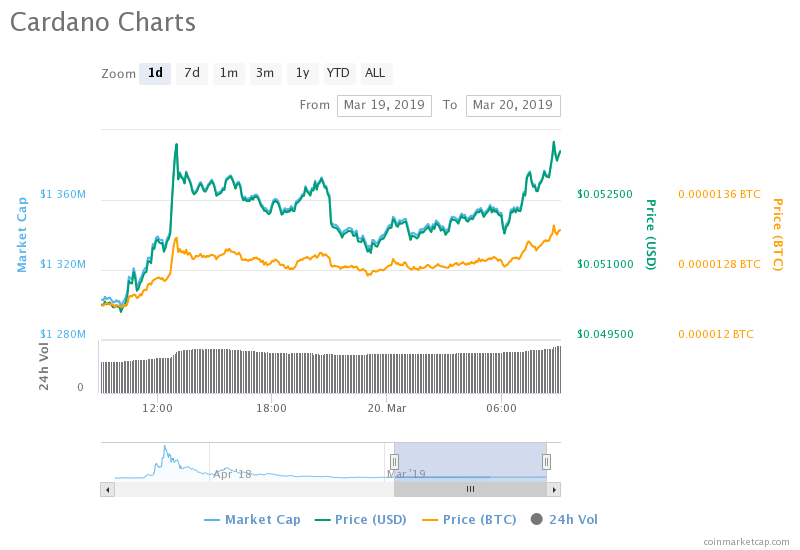 Though ADA has been rallying in the last couple of weeks, the coin continues to struggle with some key resistance positions. Currently, the coin is struggling to get above $0.054. Since the beginning of the month, the coin has recorded some significant growth coming from around $0.040 to what is at the time of press over $0.052.

Despite the coin being stuck in some sideways action since the weekend rally, the month is expected to see the coin extend its gains. As soon as the coin breaks the $0.054 resistance position, the next key target for the coin will be $0.060.

As we have reported, there are several developments expected from the Cardano project in the coming days, especially the launch of its next phase (Shelley phase) expected in Q1 of 2019, and this could offer the required momentum to see the coin break its resistance level and hit a new year high.