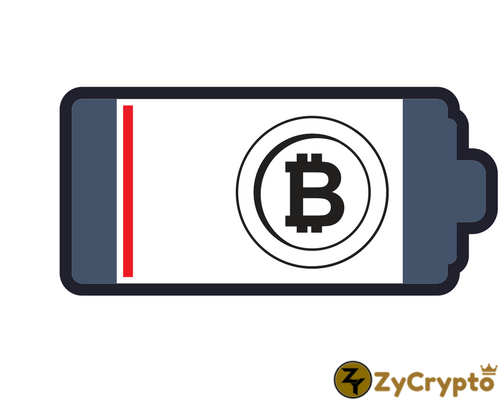 Good news for bitcoin users, who have seen fees go down to their lowest levels thanks to the adoption of various processing methods such as SegWit and Lighting Network.This has allowed mining costs to gradually decline, reaching levels of around $0.2 USD in fees for an average transaction of 0.098 BTC.
These are interesting prices, especially when compared to those of Bitcoin Cash. A cryptocurrency that has based its marketing campaign primarily on the ability to offer transactions with lower fees and faster times than those of BTC.
In terms of satoshis – which is the smallest unit for measuring quantities of a cryptocurrency such as Bitcoin – a rate of 10,000 sats generates worse rates than the same minimum transaction in Bcash; the difference in graphs being 24.44 stats per rate for BTC and 24.47 stats for BCH on February 21st. Of course, knowing the difference in value that has 1 sat BTC vs. 1 sat BCH 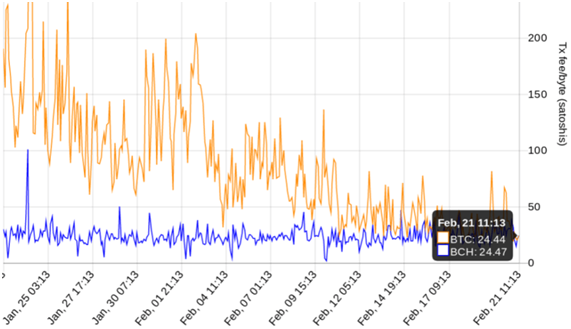 Such a significant decline is due to the scalability of the technology, which has numerous advantages, among which are the reduction of waiting times thanks to a mempool de-congestion, reaching historical lows since last year. 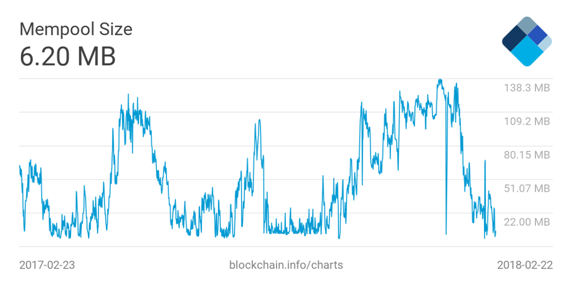 This also means great news for the valuation of bitcoin and its adoption as an exchange currency since it stimulates its use as a means of payment rather than just being a means of value storage.
Bitcoin fees have dropped almost 97% in prices, with fees going down from $43 to $0.79 cents, which, according to specialized sources would make BTC an even more profitable and practical currency than BCH.
In this way, BTC proves once again that it could win the battle against its rival, BCH, contradicting Roger Ver’s statements, who constantly praises the BCH as an option to solve the BTC’s problems.

“If you have two versions of Bitcoin, one is slow, expensive and unreliable and you have another version of Bitcoin which is super fast, reliable and cheap, it’s not a tough decision,” he told the Rubin Report in December 2017

The adoption of SegWit has allowed each block to contain more mining transactions, thus reducing the costs people had to pay to include their transaction in the next block. As a result, BTC solved the problem of the number of transactions per block differently than BCH, which did so by increasing the capacity of each mined block (SegWit “extracts” the signature).
Also, Lighting Network solves the problem of long waitings by creating “payment channels” that work instantly and only are added to the blockchain when they are closed in a final transaction.
This is a very simple explanation of an extremely complex technology, but it allows to reduce the verification times substantially and even opens the possibility of making minimum payments that otherwise would not be possible due to the current bitcoin value.