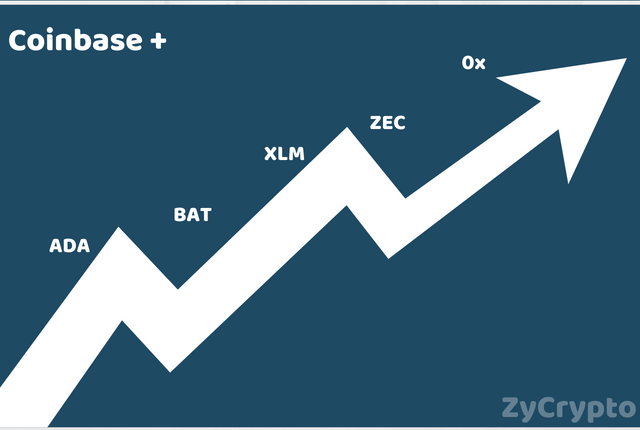 Cryptocurrency trading is sure moving in the right direction and at a breakneck pace. Despite the decrease in prices of other leading crypto assets of late, the brokerage and exchange giant, Coinbase, recently announced in San Fransisco that it is discussing with regulators and banks over the introduction of five new crypto assets to their platform. The tokens include Cardano (ADA), Basic Attention Token (BAT), Stellar (XLM), Zcash (ZEC), and 0x (ZRX).
The announcement this time was made both externally and internally to reduce their impact on market prices and protect their reputation from allegations of insider trading.
They also emphasized that some of their assets enjoy limited support from their end while the other crypto asset they made may not receive any support from their base at all, also adding that they had no timeline or timeframe for when their crypto asset will get listed. As expected, the mentioned assets rose in price in the space of 24hrs as more investors wanted in early before it finally gets listed on the exchange where prices boom as a result of more demand.
These five assets now rank among the seven best gainers among top cryptocurrencies.
Their best performing digital asset was 0x which gained 29% to prices over $0.99. BAT, being second leading asset saw a price hike by more than 22% to pitch its prices at $0.33, while Zcash enjoyed a 21% price rise to peg itself at $186.
The last two digital token on the list with the small gains; Cardano and Stellar experienced a price spike of 11% and 9% respectively. The former pegging its price at $0.14 the latter at $0.20 respectively.
These last two crypto assets were the only coins in the group with a market evaluation above $3 billion. It is essential for crypto users to understand that Coinbase has much influence over the prices of digital tokens, as they provide a more convenient way to buy these assets on their platform.
Coinbase has already listed Bitcoin, Ethereum, Bitcoin Cash and Litecoin with plans to also support Ethereum Classic and ERC-20 tokens of which 0x and BAT would be the very first on their list. They’ve also disclosed that they intend to acquire licenses needed for them to list assets Classified as securities by U.S. regulators.