Over the last few months, XRP has made a name as one of the most stable cryptocurrencies as most others lost and gained by huge margins. XRP has been swinging between $0.32 and $0.35 most of the time. However, this seems to have been affected lately as things took another turn early today. XRP experienced a sudden drop of about 7%, sending its price right below the $0.3 mark. 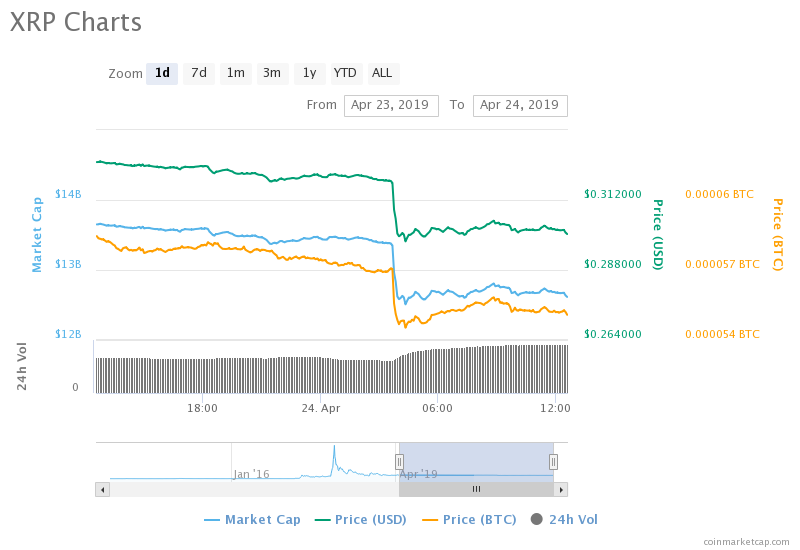 XRP isn’t the only cryptocurrency experiencing the sudden hit. Most of the cryptos in the market are currently in the red. That’s including Bitcoin and Ethereum. Just yesterday, Bitcoin was comfortably cruising past the $5,600 mark while ETH was ready to move past $172. However, things have taken a turn to the south. At this moment, Bitcoin trades at around $5,468 while ETH is selling at $163.40.

As such, it’s clear that the market forces behind XRP price fall isn’t just targeting XRP but the whole crypto market. However, the sentiments within the crypto community are still bullish, with many analysts and big investors saying that this current pull-back is just a temporary development that will be superseded by an imminent bull run.

Even more interesting is the fact that no one has pinpointed the real cause of the market-wide slump yet. Some think that it’s as a result of some technical factors and a change in speculations. Still, the so-called technical factors are yet to be fully defined along with speculative sentiments.

At the moment, XRP still retains its number 3 position on the crypto charts on Coinmarketcap. It trades at around $0.29 after bumping up a little from below the $0.30 mark. It posts a total market cap of about $12.66 billion, $5 billion behind Ethereum and around $7.8 billion ahead of Bitcoin Cash.

The crypto market has lost a few billion dollars in market cap over the last 24 hours, with crypto prices crashing by a few percentages. However, that hasn’t eroded the bullish sentiment in the market. According to most cryptoanalysts and investors, this is actually the best time to buy cryptos in anticipation of the incoming major bull run.