The week has begun with most cryptocurrencies bearish. Throughout the weekend, this had been the trend and though many were expecting the bulls to step in and salvage the situation at the beginning of the new week, this has not been the case.

Tron’s TRX bulls have in the last couple of hours proven different, pulling the altcoin from the red zone and into the green zone. Other than Ethereum, at the time of press, no other coin is recording gains in the last 24 hours. The gains could be as a result of the hype beginning to set in on the project given the upgrades expected later in the month.

Tron’s Scaling Project To Go Live On May 30

In the next couple of weeks, the Tron project is expected to release a couple of new features, and for its scaling project to go live. This development is expected to lure in DApp developers and see the project grow exponentially.

In addition to growing its authority as the leading DApp platform, Tron plans to become the most scalable blockchain network. Tron is to achieve this by deploying a sidechain (DAppChain).

According to the founder, Justin Sun, this is a key upgrade to the network and one that will see DApps usage skyrocket from millions to hundreds of millions. In addition to increasing usage, the project will reduce energy consumption, and enhance security plus efficiency. 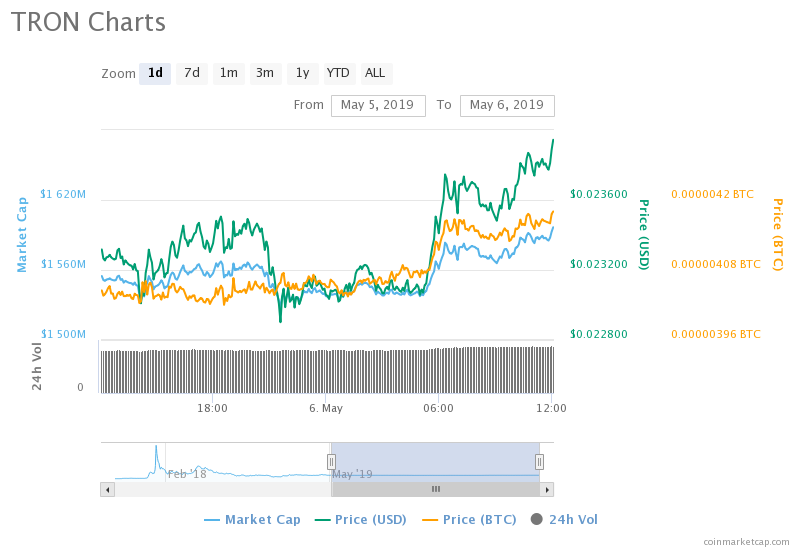 At the time of press, Tron is currently exchanging for $0.024 and sitting in the 11th spot in the market. In recent weeks, the coin has been struggling a proven point by its recent fall in ranking, slipping below the top ten. In the last 24 hours, Tron has seen a 1.5% climb defying the bearish trend in the market.

Since dropping from the highs of $0.030 about a month ago, Tron has been struggling to break out of the $0.023 and $0.024 price range. Today’s bullish resilience could be a sign that the bulls are making a comeback and boosted by the upcoming launch, they could soon help inspire the coin to retest the $0.030 resistance position soon.