In a thread of tweets on Friday, the business executive explained the reasons for Binance’s initial decision to suspend LUNA and UST trading, insisting that “At Binance, we prioritize user protection.”

According to CZ, Terra’s face-off with Binance reached a breaking point after validators decided to suspend the entire network. As a result, deposits and withdrawals from any exchange were stifled since the network was not producing blocks, placing customers at peril.

“Some of our users, unaware of the large amounts of newly minted LUNA outside the exchange, started to buy LUNA again, without understanding that as soon as deposits are allowed, the price will likely crash further. Due to these significant risks, we are suspending trading” CZ wrote.

He further went on to express disappointment at how the UST/LUNA was handled by the Terra Team. CZ disclosed that they had earlier requested the Terra team to “restore the network, burn the extra minted LUNA, and recover the UST peg” but there was no forthcoming response.

“This is in sharp contrast to Axie infinity, where the team took accountability. Had a plan and were communicating with us proactively and we helped” CZ added.

Earlier today, Binance announced that it had suspended trading of LUNA and UST pairs, after issuing a cautionary notice yesterday. Later, CZ stated that Binance had resumed trading for the said coins after a 2-hour meeting with undisclosed parties. 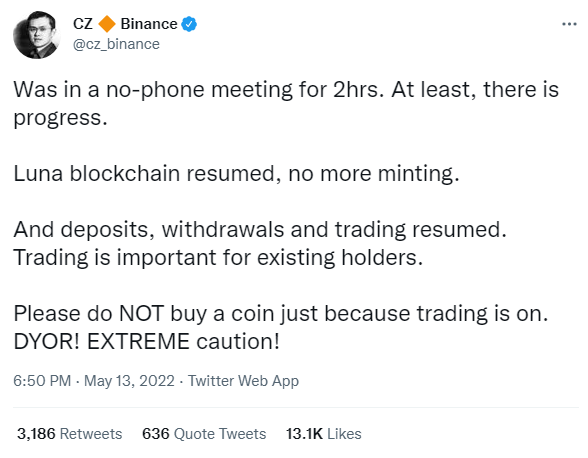 Meanwhile, on Friday, data analytics website CryptoQuant reported a significant amount of Bitcoin flowing from Gemini into exchanges, some of which was traced back to the Luna Foundation Guard (LFG) wallet.

On May 9, LFG announced a $750M worth of BTC to OTC firms to protect the UST peg. Later in the day, the LFG said that it had loaned out 37,000 BTC to market makers (MMs), highlighting that “it is currently being used to buy UST.” CryptoQuant would later trace the movement of that BTC into the Gemini crypto exchange, moments before it was dumped for UST.

The decision to use Gemini given that it is often mislabeled for Coinbase or OKX has also been questioned, exonerating CZ’s claims of Terra’s team lacking accountability.