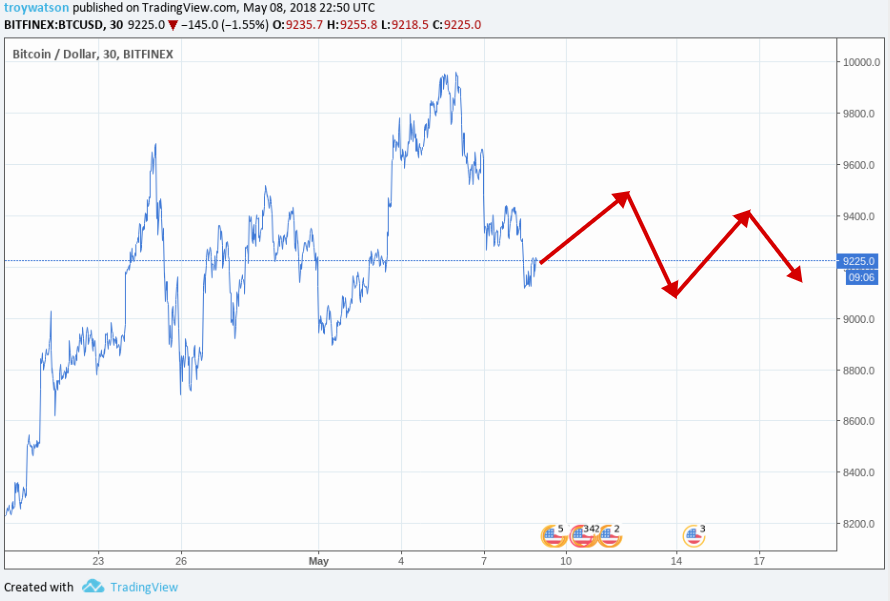 The forecast for the next 10-days is one of a rounded top formation which may eventually breakout and reverse towards the $10,000 mark.
Bitcoin price has continued a rounded top formation since the month of April and this has de-accelerated the trend lines. The formation comes after we saw a rounded bottom that reversed the BTC price trend from a downward slope to an upward formation.
The price change has nearly been like a car switching from top gear to reverse in a matter of minutes. The rounded top therefore appears to be a reversal of such a change in momentum and may indicate a short term downward trend.
The charts show a scallop pattern that often precedes a large percent change on the market and we may see more of these patterns as the BTC price breaks above the $10,000 mark. These patterns may form before a large percent change is experienced in the near future.
We created a 10-day forecast using a simple regression model and the historical prices of Bitcoin. We also computed a predicted Root Mean Square Error (RMSE) coefficient for the given forecast. The predicted RMSE is 0.0417 which translates to around 4.2% error in the forecast predictions made.
It is worth noting that this is a rough estimate but is still useful nevertheless in getting a view of the possible price changes over the coming week.
Bitcoin price hit a low at around the $9,000 mark which may require a rallying or pull back in response to the quick drop. The rally, however, may be short term peak and we may see a downward trend in a matter of days before a new rally responds to this trend.
The 10-day forecast shows a downward triangular pattern that could be a downwards wedge formation. One may expect such an organic structure like this as opposed to a rectangular pattern which may indicate wash trades or pooling activity.
The 10-day formation may continue with the rounded top trend and then break-out into a reversal above the $10,000 mark. Alternatively, the price may form a rounded bottom and slowly progress towards the $10,000 mark at a much more gradual pace.