Bitcoin has made a big comeback, successfully climbing back above $8,100. The return by the bulls comes after a dip a day ago that saw Bitcoin retest the $7,750 low. While the drop below one of its higher support position of $7,800 was troubling, its ability to bounce up before testing the troubling $7,600 was commendable.

Today, Bitcoin seemed to start off small with moderate gains of about 2% but as the wider market turned green, Bitcoin intensified its rally. Trading volume has also kicked up a notch after beginning the day under $19 billion. This is now headed above $20 billion. 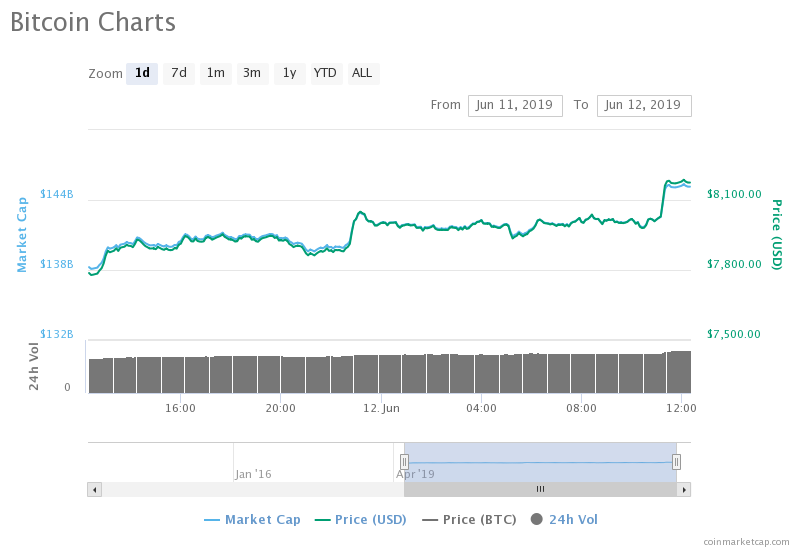 The latest rally from around the market has seen the total market cap climb to around $262 billion and this could retest $275 billion if top assets continue performing well.

Many analysts have predicted that soon after Bitcoin climbs above $9,000, it will not spend much time there. Tom Lee, has suggested that as Bitcoin approaches $10,000, it will reach full blown level 10 FOMO.

Already the latest bullish trend has been accredited to FOMO and as prices show promise of hitting all-time highs ($20,000), more and more will begin investing in Bitcoin. This hype saw Bitcoin reach $20,000 before and it is predicted it would see the asset achieve this if not more in the months to come.

Bitcoin millionaire and ‘wunderkind’ Erik Finman has recently made a prediction about Bitcoin saying that 2019 is the new 2017. While it’s true we might see the same sought of a dramatic surge, this time it will be much bigger. The world is much more adapted to Bitcoin and the push will be coming from both retail and institutional investors.