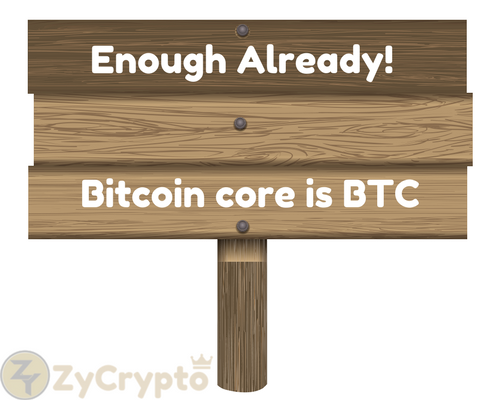 The battle for supremacy between Bitcoin (BTC) and bitcoin cash (BCH) seems to be raging on with each passing day. Since bitcoin cash was born from Bitcoin via a hard fork back in 2017, the Roger Ver team has not stopped proclaiming that their forked coin is the real Bitcoin.
On May 5, 2018, former Wall Street Executive turned bitcoin evangelist, Michael Novogratz took to his twitter handle to defend Satoshi Nakamoto’s bitcoin as the real world’s number one cryptocurrency.
The misleading tweet stated that:

“Bitcoin Cash is the oldest cryptocurrency. Its white paper was published in 2008 and the genesis block mined in January 2009. Bitcoin Core (BTC) is an experimental currency that does not have a white paper and has only operated under its current model for two years,”.

However, Novogratz quickly replied to the misleading statement stating  that:

“Enough already. Bitcoin core is BTC. It is a store of value. It is digital gold. Its market cap dwarfs bitcoin cash. If you want to be a payments currency by definition, you need to have a stable value. So why own it.??”

Enough already. Bitcoin core is BTC. It is a store of value. It is digital gold. It’s market cap dwarfs bitcoin cash. If you want to be a payments currency by definition you need to have stable value. So why own it. ??

From Wall Street to Bitcoin

Notably, Novogratz is one of the bitcoin big whales. After working at Wall Street for over two decades, he decided to venture into the exciting world of blockchain-based virtual currencies.
On February 7, Bloomberg reported that the bitcoin enthusiast raised $250 million for his Cryptocurrency Merchant Bank initiative.
Novogratz’s merchant bank is based in New York, one of the US states with the harshest stance towards bitcoin and other cryptocurrencies. Besides trading cryptocurrencies, the bank aims to offer clients assets management services, provide expert advice to blockchain startups amongst other services.

“Galaxy is building a best-in-class, full service, institutional-quality merchant banking business in the cryptocurrency and blockchain space,” he said back in January 2018.

It might interest you to know that the pro-BTC community threatened to sue Roger Ver and his team for calling the bitcoin cash “Bitcoin” and the real Bitcoin “Bitcoin Core.”
Although the community did not go ahead with the lawsuit due to lack of funds, Roger Ver’s bitcoin.com have hurriedly corrected their themselves, adding cash back to their bitcoin and leaving the original BTC as Bitcoin.
Bitcoin remains the world’s number one blockchain currency, and it will stay so until the end of time because, without bitcoin, blockchain technology would not have gained the kind of popularity it has today.