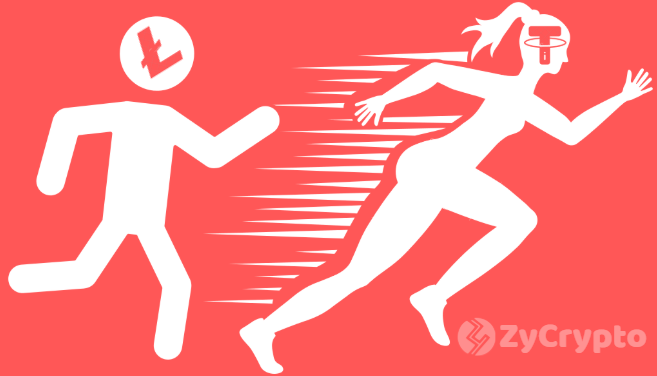 The market has been extremely unpredictable this year and many are still thinking what the market holds with some coins as there have been some displacement in market ranking that is least expected at the moment.
Like Tron is presently trading as the twelfth coin in market capitalization and the CEO and founder of the coin and it’s Foundation, Justin Sun, saying that Tron could shoot into the top 10 in the next six months.
This has called to question if Litecoin could still retain this seventh position, after Stellar Lumens displaced it? Litecoin has Gone cold with no Recent New Announcements/Updates Or Interesting New Upcoming features and Partnerships.

The answer could be seen from the following points going by the performance of Tether USD(USDT) in recent time.
Tether is in the eighth position after Litecoin but could displace Litecoin because of:
1) High trading volume: Tether USD (USDT) has high trading volume of about $2.17 billion compared to Litecoin’s trading volume of $332.42 million. This shows that Tether has a trading volume that is more than 550% that of Litecoin.
2) Its stable nature: Tether USD is not easily affected by the negative trend that affects other cryptocurrency since it is a stable coin. Presently, Litecoin is experiencing a decline, and as a result of its high value which is presently more than 57 times that of Tether, it could be expected that a reduction in its market price will affect its market capitalization and ranking negatively
3) Its total circulating volume: The total circulating volume of tether is like 47 times that of Litecoin. This could have an impact on whether Litecoin could be displaced or not since the gap between their market capitalization is less than $600 million.