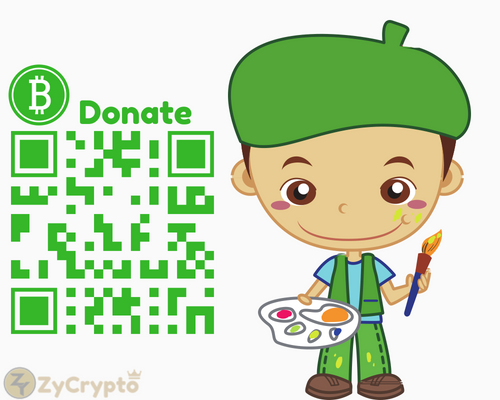 A French graffiti artist under the name of Pascal Boyart has created QR code art to allow people to donate Bitcoins to his wallet.
Pascal ‘Pboy’ Boyart has come up with his own source of income to support his passion of creating street art. Boyart has found it difficult, as do many artists, to support his passion with simply the donations and scholarships of individuals and institutions. As he creatively comes up with new ways to paint the human gaze, he has also come up with a new way to use Bitcoin.
Boyart is based in La Chapelle France which has been described by some as the cradle of graffiti art and modern creativity. Often it is the case that innovations are formed in locations that suffer in one way or another. La Chapelle has had its ups and downs but has simultaneously flourished in terms of its street art.
In November 2017, Boyart had such an innovation when he decided to combine a Bitcoin QR code in his art to source extra donations. The painting was of a child asking his father ‘what is money’ and the QR code accompanied his signature on the side of the painting.

The ‘house of Bitcoin’ recently acquired one of Boyart’s paintings of the Bitcoin logo itself. The house of Bitcoin is ‘a unique place in Paris dedicated to cryptocurrencies’. They regularly hold seminars and workshops instructing people on the use of digital currencies. They recently, for example, held a workshop explaining the fundamentals of blockchain design.
A quick analysis of Boyart’s Bitcoin wallet address shows that he has received around $1,000 (0.1137 BTC) since he started taking donations. Most of the coins have been spent or sent elsewhere as the final balance is around 0.000128 BTC.

The idea of combining Bitcoin codes and art first occurred to Boyart when he came across Satoshi’s vision of a decentralised monetary system. Boyart admits that he didn’t know much about Bitcoin at all at the start but quickly realised that the digital currency was a revolutionary and innovative idea. Boyart comments:

“It was last May when I became really passionate about this new paradigm of money… I was thinking about all the best use cases artists can do with it… It can free us from institutions and galleries… The most interesting aspect is decentralization, a peer-to-peer horizontal system. Art and creation need that, I believe”.

The latest painting by Boyart includes the famous Dutch painter Rembrandt whom suffered from financial hardship himself. Boyart’s paintings often focused attention on the gaze of a human subject and how the human spirit can be captured in such a simple glance.