Ethereum has responded positively following yesterday’s flash rally. For the second day, the asset is in the green zone. At the start of the week, the largest altcoin by market cap was recording lows of $230.

This was a dramatic fall that began during the weekend, taking prices from highs of $250 last week. The bounce back yesterday has now seen Ethereum go back to recent highs but key resistance positions remain resilient. While Ethereum successfully crossed over the $260 mark, strong resistance saw it fall back to settle just below this.

Ethereum bulls will be looking to find support above $250 if it is to make another attempt at the $260 resistance soon. Further resistances lay ahead including $270 and $285 before reaching $300. At the time of press, Ethereum is rallying by a moderate 3%, which is higher than most top coins. 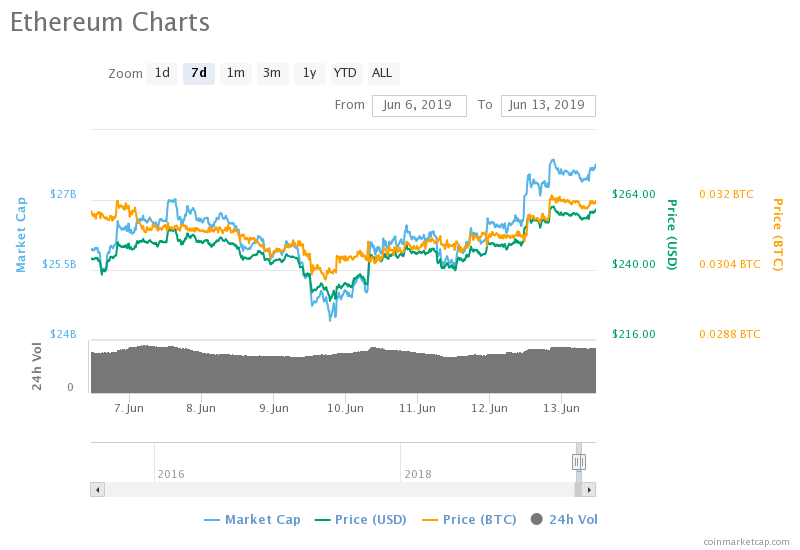 The digital asset is exchanging for $257 at the time of press. In the last few hours, its volume has dropped significantly to a little over $8 billion. For a more sustainable bullish trend, the asset needs to record volume highs of over $10 billion.

Recently, analysts have been predicting that Ethereum will surge to hit highs of $300 in the near future. One analyst noted on Twitter:

If I am right about $Btc falling wedge, then there is no reason why we should not see $300 before end of July ?

We still could see one final touch upon $222 region.

Regardless I am holding and buying on dips! pic.twitter.com/tOKh9mLKXP

According to recent reports, Ubisoft is considering using the Ethereum blockchain for its games and in-game features. If this connection leads to in-game market transactions, it could be a major boost for ETH. This adoption could see ETH prices skyrocket in the near future.

An announcement in the next couple of weeks could go along way to seeing Ethereum reach the targeted $300 position and subsequently $400.