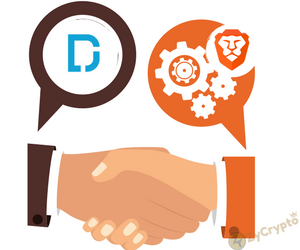 Like the saying goes “No man is an island.” Not even companies, as Dow Jones Media group, collaborates with the privacy-centric browser startup Brave to play with blockchain content delivery system.
According to Brendan Eich, CEO and co-founder of Brave said in a statement “Our new model reconnects users and publishers without compromising policy,” he also added that “We look forward to our users enjoying Barron’s and MarketWatch premium newsletters.”
The partners have no doubt agreed that they would test the content delivery using Braves’s blockchain-based platform for digital advertising.
Dow Jones media group subsidiaries; Barron’s and MarketWatch will also become “verified publishers” on the platform.
The report also said that selected Brave users would be given access to Barron’s and MarketWatch premium content as there are close to 2 million brave users.

Brave company was established last year, and its browser can block ads and activity tracker and simultaneously permit users to contribute microdonations in BAT to their preferred publishers.
Brave also concluded its ICO last spring, and it costs a whopping $35 million to set it up.
The company has excellent plans as it revealed last year that it had plans to integrate those above mentioned blockchain-based digital advertising platform capable of measuring user attention as well as rewarding publishers beautifully.
Daniel Bernard, Barron’s senior vice president, mentioned in a statement that:

“As global digital publishers, we believe it is important to continually explore new and emerging technologies that can be used to build quality customer experiences.”

Newspaper Association of America members in 2016, sent a cease-and-desist letter to Brave’s company alleging that it had an illegal browser; some of such members include; The Washington Post, The Guardian, and Vice who have now wholly accepted BAT.
This collaboration between Brave and Dow Jones Media Group symbolizes a significant departure from its early reception by media companies as almost every industry is welcoming the Blockchain technology.
Brave like a Rhino set on the loose is positioned to achieve more significant feats and this collaboration with Dow Jones is only just the beginning of the world of publishing.