No matter what you may think, the IRS knows about your trading and expects you to pay tax on earnings or face hefty penalties.

In previous years, cryptocurrency traders managed to stay under the radar with fewer than 900 people reporting capital gains on Bitcoin to the IRS from 2013 to 2015.  It is likely that many believed they could avoid paying taxes because of the perception that their trades would not be traceable. For example, AlphaBay, the successor to the illicit online market “Silk Road,” was still recommending using Bitcoin as a privacy coin in 2016.
But the assumption that Bitcoin is anonymous or untraceable is unfounded. The FBI was able to trace $13.4 million in Bitcoin from the Silk Road to its apparently anonymous founder, Ross Ulbricht, by tracing public transactions on the blockchain – and that was back in 2014. The next year, the IRS partnered with Chainanalysis to identify suspicious activity among owners of digital wallets. The Daily Beast published a copy of their contract that explicitly states it intends to “trace the movement of money through the bitcoin economy” in order to “identify and obtain evidence of individuals using bitcoin … [to] conceal income as part of tax fraud”.
It is easy to imagine how anxious the IRS is to receive the unreported earnings, especially given the huge growth in cryptocurrency investments last year. For example, only 804 Americans declared taxes on Bitcoin gains in 2015—despite an estimated 500,000 to 1.2 million people owning Bitcoin that year. In 2017, the crypto market grew 30 fold from $18 billion in January to $573 billion by year end. And in November 2017, a federal judge ordered the exchange Coinbase to release data on 14,355 account holders who had traded in over $20,000 USD.
Many don’t even realize that they need to declare their cryptocurrency earnings. Most exchanges do not send users a 1099 form like stock trading websites do (Coinbase does only if the user has traded over $20,000). And tax filing websites like TurboTax and H&R Block don’t ask if you sold cryptocurrency in the previous year. It is up to individuals to stay proactive and inform themselves of new tax laws.
If the IRS catches you not paying taxes, common fees include a “substantial understatement” penalty and “negligence or disregard of the rules” penalty, which are an additional 20 percent of the net understatement of tax. And if the IRS thinks you knowingly and intentionally did not pay your tax, it will charge you an additional 75 percent for committing fraud.

Now that you’ve decided to file your cryptocurrency taxes, how do you do it?

In the US, cryptocurrencies are treated by the IRS as property, similar to stocks. This means that you must pay capital gains on your investments that you have sold and basic income tax if mining or earning cryptocurrency for work.
Most people will have income from buying Bitcoin or an altcoin and selling it at a higher price; these sales need to be reported on Schedule D, an attachment to Form 1040. If the period between the purchase and sale is less than a year, it is taxed as ordinary income. If it is longer than a year, it is taxed as a long-term capital gain between 0 to 20 percent.
If you are in the top three highest income brackets, you must also pay 3.8 percent tax on net investment income. Mining and sales receipts in cryptocurrency is also taxed as ordinary income between 10 to 39.6 percent depending on your tax brackets. The coins are valued at the historical price on the date the action occurred, so you must look up the spot price on a site like CoinMarketCap.com.

This sounds very complicated. Aren’t there tools to make this easier?

If you have made more than a handful of trades, and especially if you have used multiple exchanges, it can be a nightmare trying to calculate the capital gains, even for an experienced accountant. Fortunately there are a handful of websites that can import your trade data, look up the historical prices, and calculate the gains on each trade.

Our recommendation is to use GetCryptoTax.com because it is cheap, user-friendly, and almost anonymous.
This app has one of the slickest user interfaces out there and provides a hand-holding, informative tutorial to help you extract your trade data from exchanges. It uses spreadsheet imports instead of API connections because, if you set up your API access incorrectly, the app could potentially trade with your money! They don’t have a large list of exchanges yet, but they are adding new ones almost every day; you can email them with recommendations.
GetCryptoTax.com just launched in April 2018, so if you sign up early enough, you can download your reports for free while they are beta testing – they only ask that you give feedback on any bugs you may find or features you would like to see. They plan to eventually price it around $10. 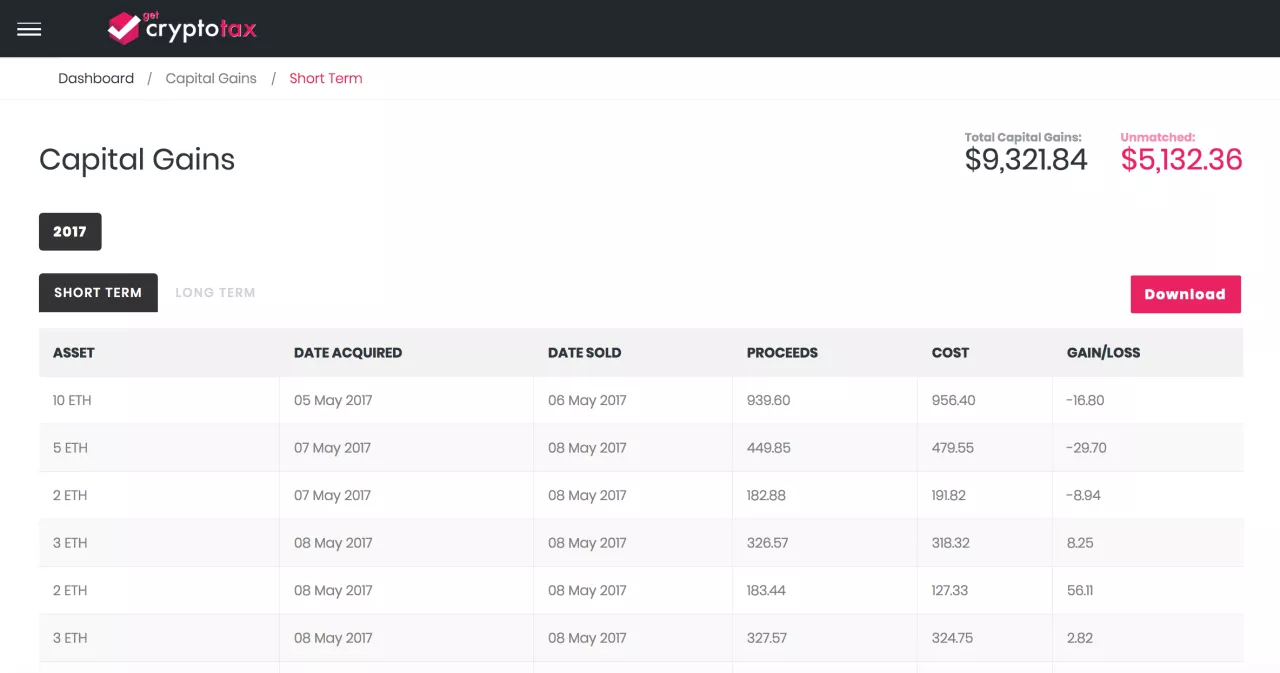 Bitcoin.tax has been in operation since 2013, so they have worked out the kinks by now and have a lot of options.
You can connect all of your exchanges to it via their API keys and it will import your trades and calculate the data for you to give to your accountant. You can even choose which cost basis you want to use and they will recommend which is cheapest; we don’t recommend using anything other than FIFO, though, as the other methods may raise red flags with the IRS.
If you do not want to give them access to your exchanges via API, you can still upload spreadsheets like GetCryptoTax, but it only accepts one spreadsheet format and each exchange has its own unique format so we found this feature to be quite impractical to actually use.
Bitcoin.tax starts at $29.95 per year for 10,000 transactions and goes up to around $100 for higher volume traders. 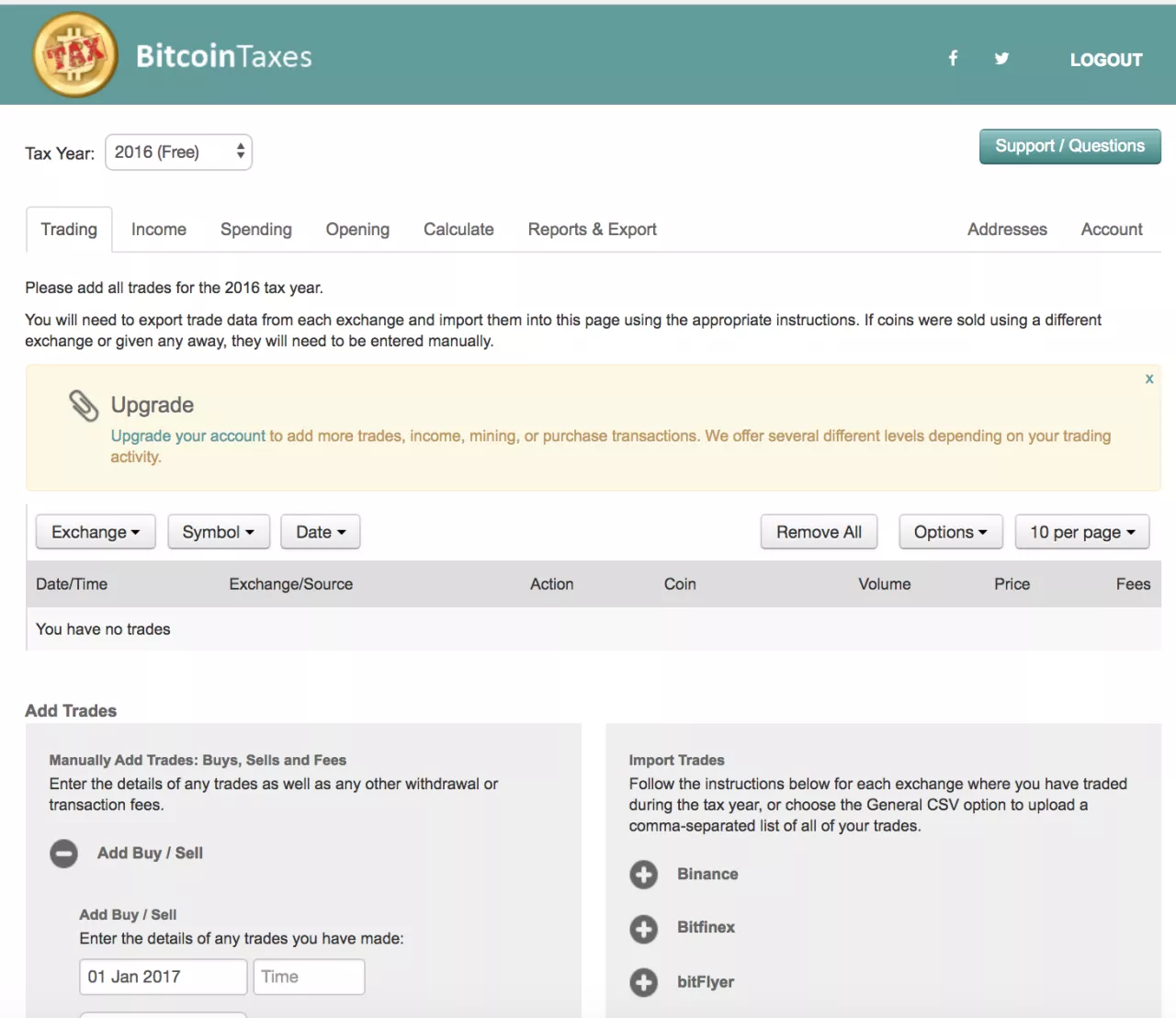 Cointracking.info has also been around since April 2013 and has built a lot of features by now. Although we do not recommend it to the average user due to its overwhelming complexity, it can be a real boon to hardcore traders or accountants who are willing to invest the time to learn their way around it.
The cheapest option for tax preparation costs 0.012 BTC ($84 with Bitcoin currently at $7,000 USD) for up to 3,500 transactions. You can get unlimited transactions for 1 year for 0.019 BTC ($133) or unlimited lifetime for 0.289 BTC ($2,000 USD). This could be a great option for serious traders, although as more competitors enter the market and develop new features, we expect prices to come down. 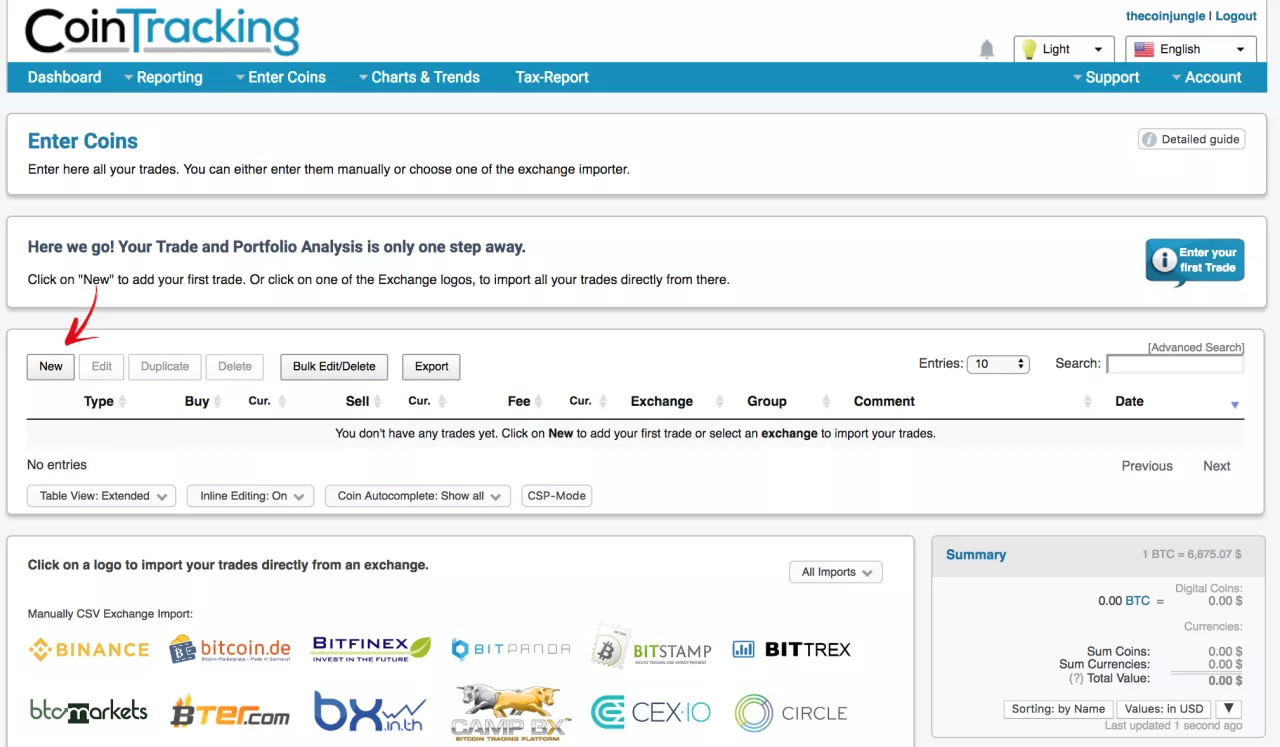 Cointracker.io is another relatively new site that launched in August 2017. Like Get Crypto Tax, it has a pretty nice user interface. It does not seem to offer spreadsheet uploads but it can do API access like the other sites and even has a feature to read trades from your public wallet addresses.
Cointracker.io starts at $49 for 100 transactions, $149 for 1,000 and $999 for 15,000.

Disclaimer: This is not intended to be tax or legal advice. Please consult your own professionals.