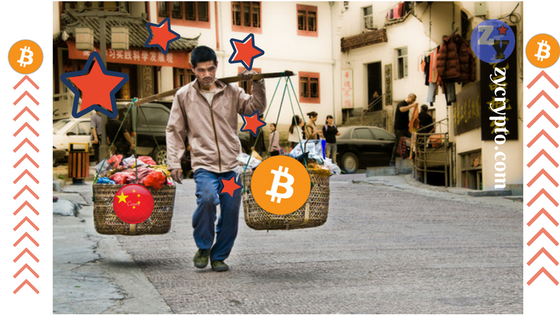 China has been in the news lately because of their recent strict regulations on bitcoin and their banning on bitcoin exchanges and ICOs by the chinese regulators.
Thinking of the great popularity that Chinese regulators have made bitcoin, in china and all parts of the world which have even brought mainstream attentions, of which jamie dimon made his harsh comment on it when Chinese regulators started hinting on banning bitcoin exchanges.
Also read : Chinese pressure : bitcoin exchange BTCCHINA Closing up on October
China sees bitcoin as a threat to their Yuan , probably that is why they want to control it, but since they see they cannot control the cryptocurrency ,as bitcoin was not created for the government or anybody to control it.
There are speculations that china might ban bitcoin entirely, which comes at a pros to them as they might want to later refresh ahead and be the ones(government) that will sell bitcoin to their citizens ,so as to be 90% in control of bitcoin in china.
Chinese citizens are heavy traders on bitcoin which is why china is making a move on blocking access to all foreign exchanges with their great firewall.

Yes, i said it they are doing the wrong thing as controlling their citizens where and where not to spend their money , which is a great limitation of freedom..
Giving orders to bitcoin exchanges which has striven for so many years to build up their name and brand to the global field to all shut down just like that is really sad, this is why i think that they are not treating their citizens fairly.

The china that i know are always the best in technology advancement , and i know that bitcoin is one of the greatest financial technology ever in which china would not want to miss out on it, which is why i seriously think that they have secret indoor plans on bitcoin.
Many countries will overtake bitcoin, before they realize what is happening, countries like japan, Switzerland, North Korea and the west would have been on the great side of it.

Bitcoin will continue to hit mainstream

Bitcoin keeps on getting popular every day by day with the continuous trend of bitcoin on google searches with news coming in and out daily in the bitcoin space.

Bitcoin is made for greatness and all countries should start adapting to it on time as at least 1/3 citizens in each country in the world all know about it and the great help it offers in transactions because of its financial technology.
Should you sell your bitcoins over fear ?
No you probably should not fear because of china`s recent strict/harsh regulations on bitcoin as every big thing always goes through trying times and bitcoin is already made for greatness, so fasten your seat belt as we get to 10K soon…

images via dribble,pixabay and shutterstock