Since the market began falling in early 2018, most cryptocurrencies lost over 80% of their value. Despite several attempts throughout the year and at the beginning of 2019, most coins remain in their all-time lows. One coin that has lost much of its glory in the last 14 months or so, is Cardano (ADA).

The coin has lost over 90% of its value from early 2018, as well as its ranking position which followed a catastrophic drop in its market cap and above this, the Cardano project has been stagnant in project development leading to investor frustration and drop in confidence in its future success.

Cardano Starting To Turn The Tide

Although things have been looking bad for the project and token for the longest time, things seem to be changing. The last couple of days have seen ADA begin to change its trend and turnaround things. If the positive spell is to persist, this could be the best month for ADA yet. In the last seven days, ADA has climbed from around $0.041 to hit a high of $0.048 as of yesterday. Although the coin found resistance around this area and a price correction saw the coin drop back to $0.046, this remained a huge achievement. 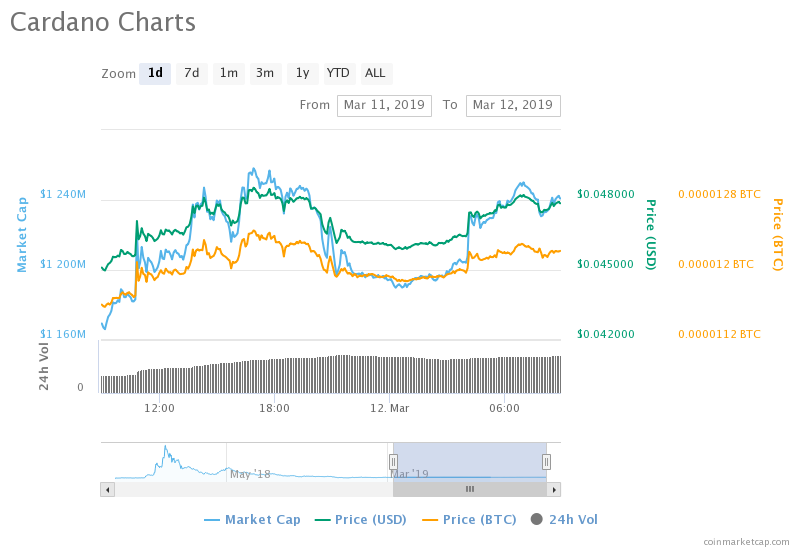 At the time of press, the bulls are consolidating and look ready to retest the $0.048 position again, this time, with a little bit more aggression, they look set to break it. If successful at breaking the resistance position, this will give them a real shot at reaching $0.050, a position they have not hit since the start of the year. ADA is up by nearly 6% at the time of press, trading well above $0.048.

To hit the coins year high of $0.052 could be facilitated by the launch of the projects next key phase which is expected in Q1 of 2019. In fact, this in itself could be what is helping accelerate growth for ADA right now. The coming phase is one of the projects most significant phases as it will make the Cardano blockchain fully decentralized. Although Cardano has achieved plenty without being fully decentralized, it stands to gain even more once it is.

In anticipation of this phase, ADA is expected to continue gaining and If successful, Cardano could continue soaring for a long time to come.