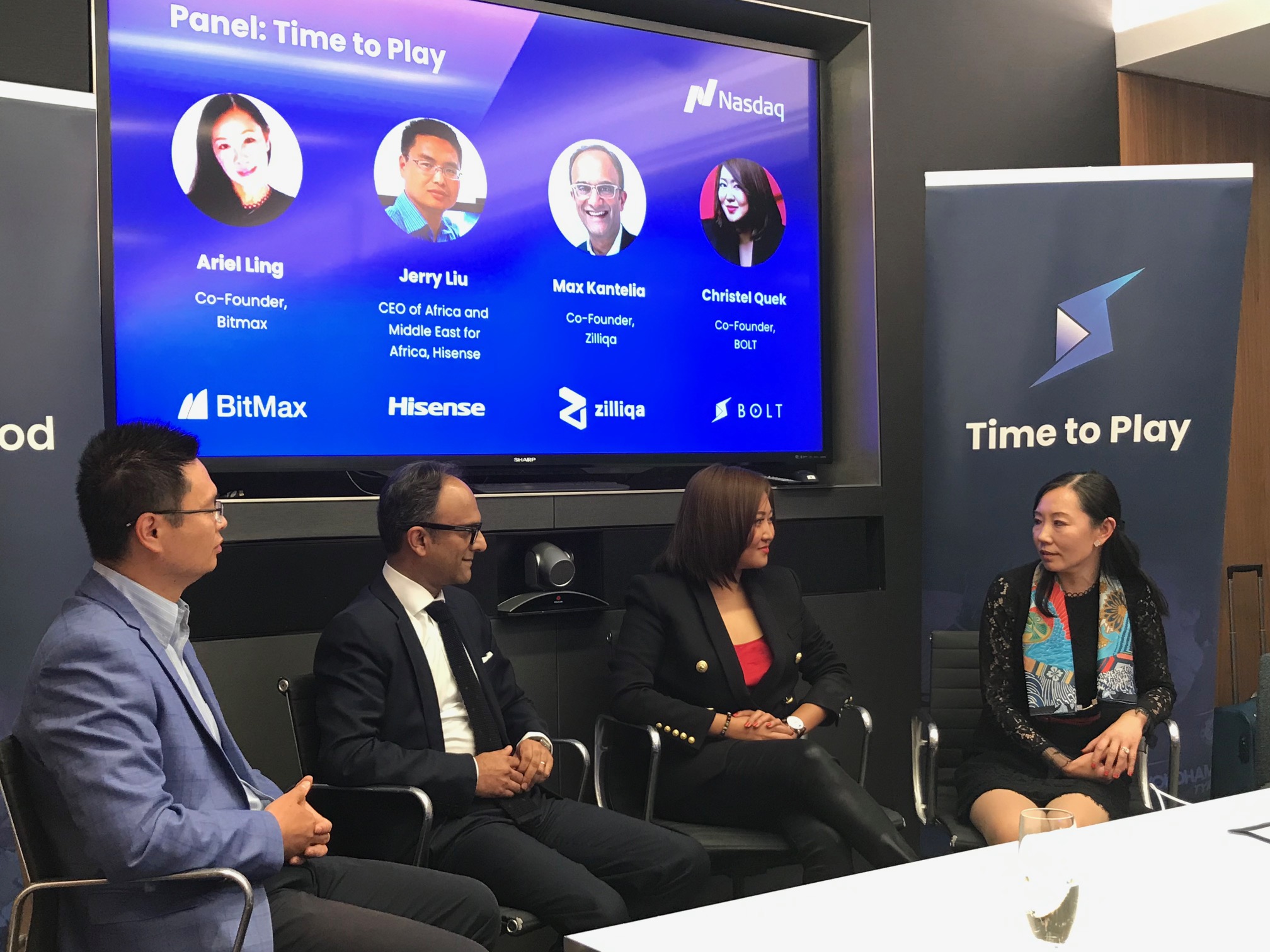 30 April 2019, NASDAQ New York: BOLT, the revolutionary mobile-focused video content ecosystem will unveil two applications to bring the blockchain to the masses today. BOLT+ is a streaming application with a curated blend of live TV channels and video playlists for different moments, genres and moods.

The BOLT Wallet allows users to store the BOLT Token, and mobile data redemption packages. Together, both applications aim to empower half of the world’s population, the underbanked and unbanked, known as those with limited access to formal banking structures and data accessibility. By giving them unprecedented access to the information highway, which includes internet connectivity, information, and entertainment, the applications will also allow content creators and users to be rewarded for their time and quality of content submitted on BOLT.

The company will also announce its strategic partnerships with BitMax.io, an innovative digital asset trading platform, and the Binance Chain, the world’s largest major cryptocurrency exchange by volume of trades and a blockchain software system initially developed by Binance and the community. The BOLT Token, which is currently listed on BitMax.io and Switcheo Exchange, will be migrating from the Ethereum protocol to the Binance Chain in the coming weeks. The BOLT Token will be the first asset on the Binance Chain to be traded on Bitmax.io.

BOLT utilizes a breakthrough model in the digital streaming and blockchain ecosystem, which will allow for real world applicability of the blockchain to be used by everyone, everywhere at any time. The BOLT Token, which can be accumulated and traded, will be used heavily within the BOLT ecosystem by users to access premium content, starting with its suite of entertainment, sports and educational content. It can also be used to reward content creators, or to trade for mobile data plans by supported telco networks. The BOLT Wallet will allow users to manage their BOLT tokens alongside other tokens compatible with the ecosystem such as Binance Coin (BNB) and Bitmax Token (BTMX).

Speaking about the launch of the BOLT Token and BOLT+, Jamal Hassim, Founder and Chief Executive Officer said: “With the BOLT Token, we are offering our users the first real world application of the blockchain within a simple and elegant user experience. We want to include users not only with credit or debit cards but those without – the unbanked and underbanked – onto the platform.

Often, these users are charged a premium by their telco companies and content companies to access premium content, and we wanted to help reduce this and broaden accessibility. By utilizing the blockchain, we can directly connect the consumers to the content and the content to the producers, without additional transaction costs involved.”

The announcement will take place at an exclusive event today at NASDAQ, New York in the presence of BOLT’s strategic partners. The event will open with a keynote address by Christel Quek, the Co-Founder and Chief Commercial Officer of BOLT who will provide a preview of BOLT+, and the BOLT Wallet, followed by the announcement of BOLT’s latest content partnerships with CNN and Trace TV. 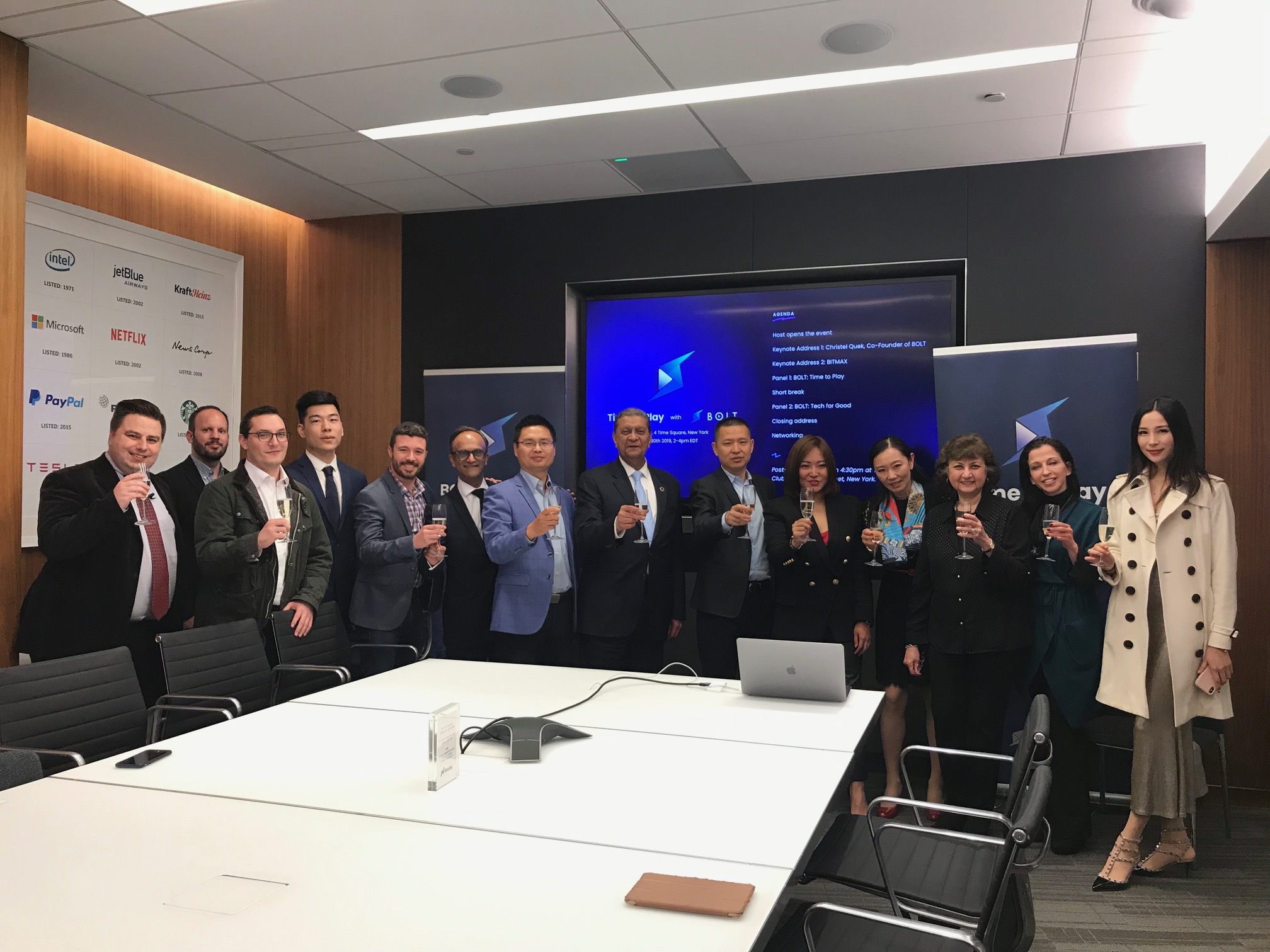 Christel Quek, the Co-Founder and Chief Commercial Officer of BOLT, added: “No other project has managed to offer a scalable large-scale mass application of the Blockchain for users. Consumer applications are needed for the blockchain to be adopted by the masses. The blockchain community must move from decentralized tribe in motive to an inspired movement of vision that will allow the Blockchain to become part of the everyday vernacular.” 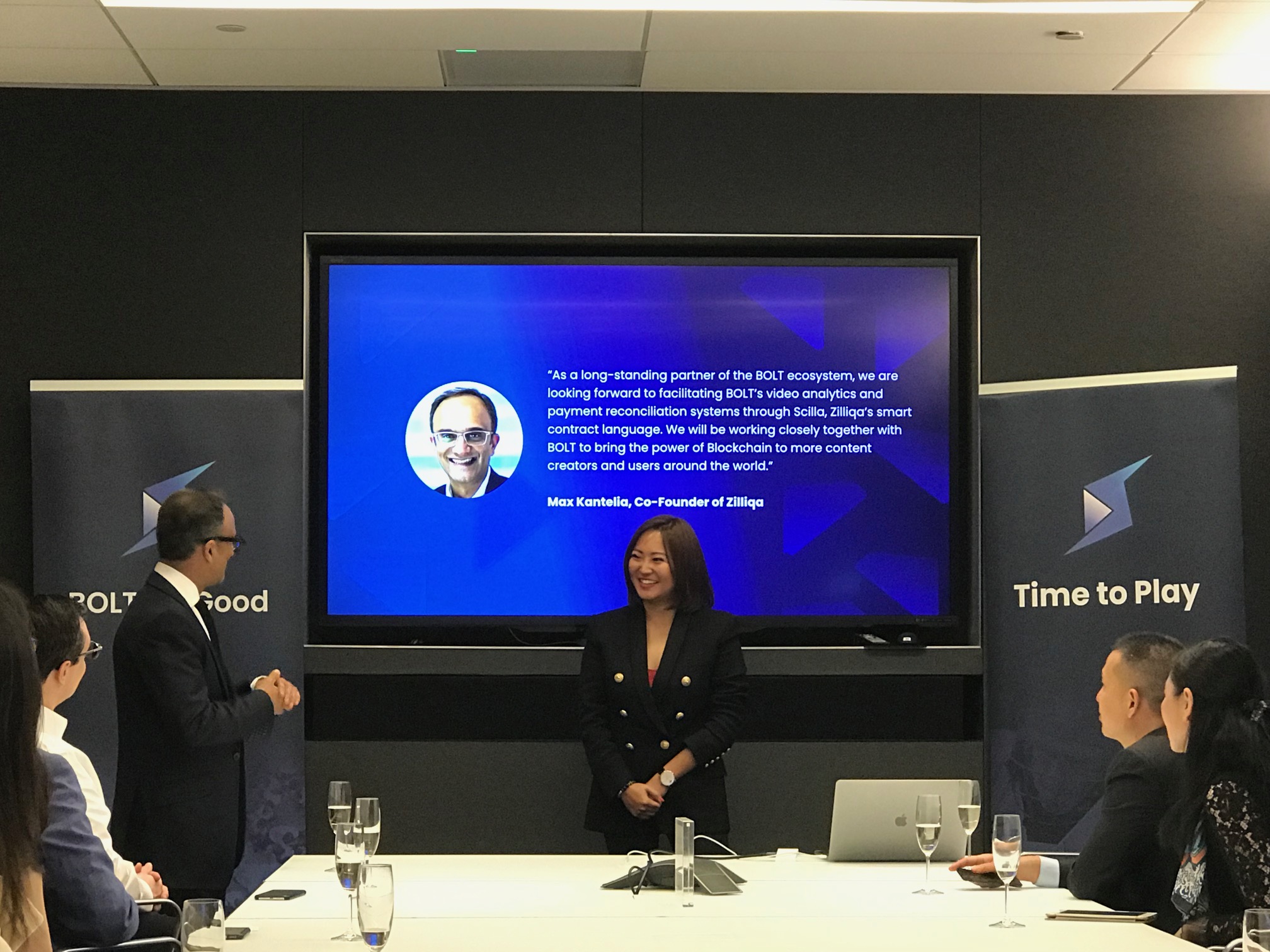 Ariel Ling, Co-Founder and Chief Operating Officer at BitMax.io commented on the strategic partnership between BOLT and Bitmax saying: “The vision and development of BOLT exemplify how blockchain technology optimizes and transforms current mature industries, such as social media and entertainment, by providing real benefits to real users, especially in the underserved markets. It has been a great journey partnering with Jamal, Christel, and their team to list the Bolt Token on BitMax.io and support the expansion of the BOLT ecosystem with a scalable and efficient token trading market.”

The event will also comprise of two-panel discussions to spotlight the open platform developed by BOLT in a bid to decentralize the media industry and empower the users from developing economies. The panels will also highlight success stories of leveraging innovative tech for social good and discuss how BOLT+ and the BOLT Token would potentially benefit billions of people.

The first panel will focus on BOLT’s central theme Time to Play where attendees will hear from BOLT’s co-founder and partners on the innovative use of technology. Panellists include Ariel Ling, Co-Founder and COO of Bitmax.io; Jerry Liu, CEO of Hisense for Africa and Emerging Markets, one of the World’s leading consumer electronics brands and lead sponsor of the 2018 Football World Cup and 2020 Euros Competition; Max Kantelia, CEO of Anquan and Co-Founder of Zilliqa, the first public blockchain platform that implemented sharing; and Ted Lin, Chief Growth Officer, Binance Chain.

Max Kantelia, Co-Founder of Zilliqa shared his views on popularising the Blockchain to users worldwide through a partnership with BOLT: “As a long-standing partner of the BOLT ecosystem, we are looking forward to facilitating BOLT’s video analytics and payment reconciliation systems through Scilla, Zilliqa’s smart contract language. We are looking forward to working together with BOLT to bring the power of Blockchain to more content creators and users around the world.”

HiSense is partnering with BOLT to bring access to premium video content to millions of consumers in Africa and beyond. A major Chinese multinational appliance and electronics manufacturer, which includes subsidiary brands Sharp and Toshiba,

Commencing shortly with the South African market, the BOLT+ and BOLT Wallet apps will be embedded in HiSense mobile handsets. Buyers and current owners of HiSense handsets will be able to enjoy the broad range of entertainment, education and health-related content at the click of an icon. HiSense handset owners will also be part of the BOLT Wallet and BOLT Token ecosystem where they can participate in activities that earn them valuable BOLT Tokens, which amongst a whole host of uses also allow them to purchase mobile data packs from their favorite telco to stay connected.

Speaking about the partnership with BOLT and how HiSense is supporting BOLT’s mission to empower citizens to access the information highway, Jerry Liu, CEO of Hisense for Africa and Emerging Markets said: “We see the partnership with BOLT as being strategic and valuable in building and keeping the loyalty of millions of users and consumers. The bonding of content, a payment system, and hardware is a powerful proposition in providing a compelling experience for consumers around the world. Hisense has a global ambition to go faster and further into new territories and exciting content experiences for our customers. As the number one electronics manufacturer in South Africa with a market share of more than 20%, we are proud to work closely with BOLT to bring great content to over 6M devices in South Africa. We will also be looking to expand and scale our efforts to more markets across Africa from 2019-2020.”

Speaking about the opportunity the Binance Chain presents, Ted Lin, Chief Growth Officer of Binance also commented: “We are delighted to be working with BOLT to help scale their efforts to more markets and users around the world through the power of the Binance Chain. The Binance Chain, which has a one-second block time, will ensure transactions and interactions by BOLT’s users to be fast, efficient and effortless.”

The focus of panel two will be the power of technology to implement social change with the participation of NGOs leveraging blockchain and other technological innovations to create ground-breaking impact. The theme of the panel stemmed from acknowledging the widening gap of digital services and financial inclusivity amongst individuals in developing and Emerging Markets. To this effect, BOLT is inspired to build a movement of local cultures going global, where creativity, connections, and discovery can be bonded together.

Speaking about the need to decentralize the industry and empower and uplift communities globally, Christel Quek said: “Users have diligently supplied data and engagement time to centralized social media platforms such as Facebook but received none of the revenue benefits or a utility-based reward that goes beyond the actual access of the platform. Their centralized business models which collect your data and “sell you” to advertisers is increasingly unattractive. They are unable to mobilize the community to self-censor and moderate to community-determined standards. So, we built BOLT as an ecosystem on the Blockchain to provide an in-ecosystem store of value which increases as utility increases. It is this value which we can give back to our users which will drive how we work with our community and how we engage with our users.”

As a unique and ambitious ecosystem of users, partners, and content creators, BOLT encourages users all over the globe to connect and view original content, to not only watch passively but to participate in the curation of their news and entertainment. BOLT+, BOLT’s streaming application, has in-built engagement and in-app currency features which allow content creators and users to be rewarded for the time, effort, and quality of content they submit to BOLT.

Creators and users can also mutually unlock value by participating equally in the ecosystem. To further encourage users to use BOLT Tokens, the platform currently incentivises users by applying discounts for BOLT Token to purchase services, instead of using fiat payments. Today, BOLT continues to grow and expand its existing partner ecosystem across the world. These include telco partnerships for data bundling and direct carrier billing, innovative content broadcasters who want to engage with audiences in emerging markets, and other rich media verticals such as gaming and education.

Moshnake Aims to Upstage Decentraland and Apecoin in the Crypto Market