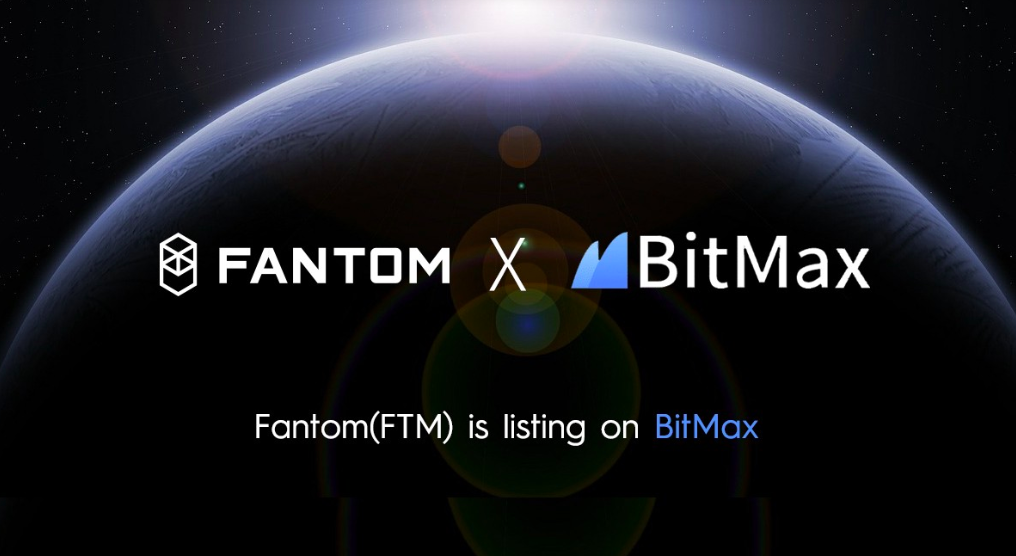 BitMax.io (BTMX.com), the industry-leading next-generation digital asset exchange, has announced a strategic partnership with Fantom, the decentralized nervous system of the smart cities of the future, and the platform for nearly instantaneous payments. Fantom solves the problems of existing distributed ledgers such as Ethereum and Bitcoin, by utilizing its revolutionary technology on a global scale. The Fantom token was listed for trading on the BitMax.io exchange on March 12th, 2019.

Fantom’s mission is to provide compatibility between all transaction bodies around the world, creating an ecosystem that allows real-time transactions and data sharing with low cost. The distributed ledger proposed by Fantom is combined with a high-performance virtual machine and secure smart contract execution.

The new network proposes a groundbreaking consensus mechanism which utilizes gossip to reach aBFT consensus. The developers behind Fantom consider themselves to be specialists in holistic consensus. They’re building the network and the next generation infrastructure or backbone to power smart cities and blazingly fast payments. Fantom is a highly scalable, decentralized, and secure network. It has the ability to collect a large quantity of high-speed data transmission with scalable solutions across multiple smart city service providers.

By 2020 it is estimated that smart cities will have 90 billion IoT devices sending data that needs to be stored securely and be accessible to stakeholders for smart city data-driven Smart contracts and DApp. As an IT infrastructure backbone, the Fantom platform will change the operation of public utilities, smart homes, healthcare, education, traffic management, resource management, and environmental sustainability.

The platform is open-source and will be used and changed by the community to provide various application support tools that can be used to create decentralized applications (DApps).

Fantom’s technology is intended to create potentially infinite scalability, processing transactions very quickly even with a large number of nodes participating in the network. It will use a method where a single event block verifies the transaction prior to it, and transactions are verified and processed in a non-synchronized way without being approved by miners as in prior blockchains. The increased transactional load won’t lead to bottlenecks or delayed approval. It also intends to manage historical information without assistance from external databases, such as the Oracle Database.

Third generation blockchain technology shows improved performance, but the speed of creating blocks is still slow. The OPERA Chain intends to ensure high creation and processing performance of up to 300,000 transactions per second.

With a high level of scalability and reliability, Fantom’s strong third-generation blockchain technology will be able to be utilized on a large scale across many industries and domains. It intends not only to process large numbers of transactions at scale but to process Story and historical data to ensure the reliability of transactions.

Dr. Ahn is the CEO of Fantom Foundation. Ahn is a contributing writer at Fortune Magazine and has been awarded the President Award for his successful IT business. In 2010, Dr. Ahn established a successful food-tech platform SikSin, which has since acquired over 3.5 million downloads and 22 million monthly page views.

Jake Choi has been involved in the cryptocurrency space for over three years as an investor, trader, advisor, and entrepreneur. Previously, he worked as Vice President of Sales at digi.cash, a digital currency platform, where he established their cryptocurrency brokerage and vaulting business, facilitating trades up to US$5million worth of cryptocurrencies.

Michael Kong is a smart contract developer who has been involved in the blockchain space for several years. He previously worked as the Chief Technology Officer at Block8, a venture capital-backed Blockchain incubator where he managed all of the business’s projects.

BitMax.io is the industry leading next-generation digital asset exchange that provides a broad range of financial products and services to both retail and institutional clients across the globe. This innovative trading platform was founded by a group of Wall Street quant trading veterans and built upon the core values of blockchain, transparency, and reliability, to deliver high-quality client services and efficient trading experience.

Last November, BitMax.io team introduced a revolutionary trading model that combined “transaction-mining” and “reverse-mining.” Different from traditional transaction-mining-only exchanges, BitMax.io platform users receive not only BTMX tokens as a reward for trading on the platform but also rebates for executing maker trades. “Reverse mining” helps to support the liquidity on the platform.

BitMax.io always strives to provide its global users with a comprehensive set of trading products. Its recently launched margin trading function is another step forward from a product offering perspective to better serve their dynamic trading needs. For those users who understand and acknowledge the risks involved in margin trading, the function allows users to borrow funds from the platform and to trade more digital assets than they normally could afford. The list of digital assets that can be traded on margin has increased from the initial four to 18 different tokens, even including BTMX platform native token.  Again, this is the pioneering move among all the exchange players, that not only builds upon its progressive BTMX token economics but also expands the utility functions of BTMX, especially with those BTMX under lock-up that can be used as collateral.

Overall margin trading can bring more trading volume and enhance liquidity on the platform. And with increased buying power, users can leverage their tradable asset as collateral for a potentially higher return on investment when the price goes up. However, they need to bear the risk of potential losses from margin trading when the price moves down. (The margin trading function of BitMax.io is not available for North American markets.)

BitMax.io has already expanded its global client base to 40,000 active community members and over 110,000 registered users. Last several weeks the team has successfully launched the listing of seven innovative new projects and the Fantom listing will be part of this impressive track record. BitMax.io and Fantom are both committed to encouraging the broad-based adoption of cryptocurrencies with focus on real-world usability and scalability.