Bitcoin has recorded another Milestone with its computing power reaching an all-time high 8x higher than that of 2017 when Bitcoin hit its all-time high price. The hash rate has consequently also reached an all-time high thus making the network more powerful than ever.

According to data from Blockchain.com, the hash rate reached a high of 79 TH/s on the 20th of July although it dropped 67.1 TH/s on Sunday 21 despite the ongoing price struggle Bitcoin is facing. 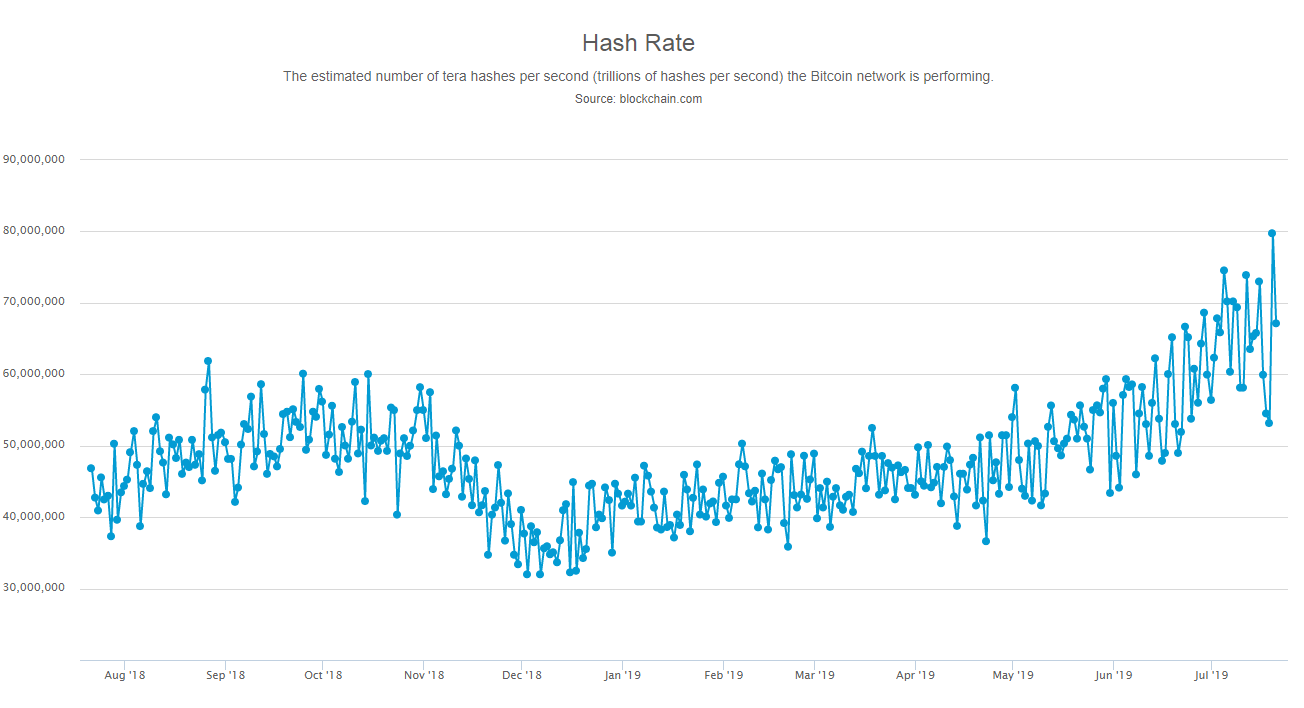 This is likely to be influenced by the 2020 halving that is coming in May next year according to cryptocurrency analyst Filb Filb. A combination of the two factors could send Bitcoin price up in spite of its current sideways movements.

Bitcoin price has historically moved in the direction of the hash rate. As hash rate increases to an all-time high, the price is likely to follow suit even though it may not be showing the signs of such movement at the moment.

Also, Bitcoin halving is expected to increase Bitcoin price as Bitcoin block reward reduces by half from 12.5 to 6.25 BTC, this will reduce the supply of Bitcoin as has been in the last few years, thus raising the price as scarcity increases.

Bitcoin halving has also historically led to significant price increases and the 2020 halving is not likely to be an exception. As a matter of fact, the increase is expected to be greater than those of previous years as the cryptocurrency has gained genuine popularity as compared to 2017 when interest was purely due to the hype for new technology, experts say.

With the rise of platforms such as Bakkt, more potential is being added to Bitcoin that could genuinely engender organic price moves. As Bakkt launches its testnet today, the atmosphere has indicated huge acceptance from institutions which could change the future of Bitcoin market as we know it.

In the meantime, Bitcoin price hasn’t shown any significant positive price change following Bakkt testnet launch. Regardless, the future could be holding something good for Bitcoin as customers continue to accumulate. Besides, enduring price gains take time to build so more could be going on than meets the eye.