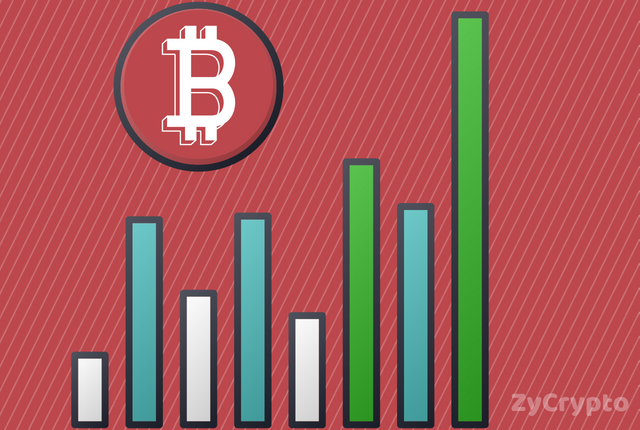 It’s simply staggering that bitcoin is up by over 44% from its June’s low of $5,785, and no one is hurting more than the short sellers. Much of these gains have come within the past two weeks, but surprisingly nothing comes close to the bull run that was witnessed on Tuesday 24 July.
After picking up its slack on Monday, from a 3% decline over the weekend, bitcoin was trading at around $7,700, Come Tuesday, what was expected to be a slow and steady week turned into one of history’s greatest bull. A rally that saw bitcoin jump by $600 in 12 hours, and even briefly hit $8,400 before going back to $8,300.
Although the digital asset seems to have settled for now, there is every indication that the bull run isn’t over and it will not stop until the coin hits at least $10,000, of which it is likely to launch itself for a full-scale bull run.
However, having tested the $8,400 resistance level and fallen short, it needs to break it first and start testing $9,000. The bullish run could alternatively make a short-term price correction that could see bitcoin retract to around $8,000.
The most surprising thing about this bullish run is that no one can put a finger to why it happened and why now. Some financial experts are speculating that this has been brought about by, Bitcoin’s ETF speculations, institutional investment, and the Web 3.0 revolution.
However, this is not news, all three issues have been around the media all along so its really hard to see why they conveniently became the reason for this bull run. But one reason that has really facilitated this bull run is that for some time now the market has enjoyed a ‘negative free’ press.
In the past, the market has been hit by negative news now and then which has always taken a toll on it. Right now, it’s almost like the market is only enjoying good news which has also previously proven to bring price hikes.

Other news that could have significantly affected bitcoin price was SEC’s decision to approve bitcoin ETFs. The decision which has been long awaited by the market could have some significant effect on bitcoin price and most experts agree its for the positive.
According to some, this is the single news that could send it to its all-time high, which is anything above $20,000. However, the SEC has announced a delay on their decision to approve at least five bitcoin-related ETFs from Direxion Investment. The approval or disapproval of these proposals is now expected on the 21st of September.
Although the crypto community has shown enthusiasm about the possibility of bitcoin ETFs, a few experts have risen concern over the fact that this could open a door that will see bitcoin classified as a security.
Which would be contradictory since the commission has already cleared the digital asset as ‘not a security.’ For now, the SEC says that the extension will help them better understand and evaluate possible outcomes of approving or disapproving bitcoin ETFs.