The last few days have seen Bitcoin hold up above $3,800 very well. Despite the great support, progress from the coin has continuously been halted leaving the coin short of the $3,900 position. Soon, this could begin causing trouble for the coin.

Investors are known to be impatient especially where they cannot see progress. If Bitcoin does not signal intent for progress, holders and traders might soon begin selling creating more supply than demand. Another drastic bearish move would see the coin risk dropping below the $3,500 position.

During the late weekend plunge, Bitcoin found support around the $3,760 position, a position it has not re-tested since it bounced off it. If the coin would suffer another drop and trade close to this position, this would open up a possibility to hit below $3,500.

The only way to avoid risking such a drop is a quick rally that sees Bitcoin climb above $3,900 and remains in reach of $4,000. In an optimistic scenario, Bitcoin reaching around $4,200, which has recently proven not to be hard, would see a real optimistic bullish view set in. Last week’s rally was proof enough that the market can rally as dramatically as it has plunged of late, proving that when the next long-term bull charge gets underway, there will be no stopping it or slowing it down. 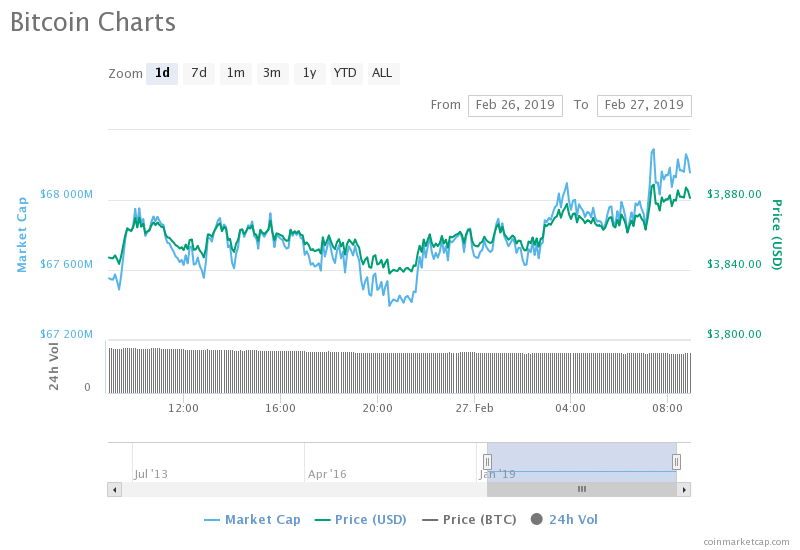 Despite attempting to rally yesterday, riding off the news coming from XRP and its own impressive gains, BTC was unable to sustain its gains and soon turned red. Now at the time of press, the crypto leader is still in the red zone but only recording marginal losses from the last 24 hours. Trading for a little over $3,850, the coin continues to struggle to climb above $3,900.