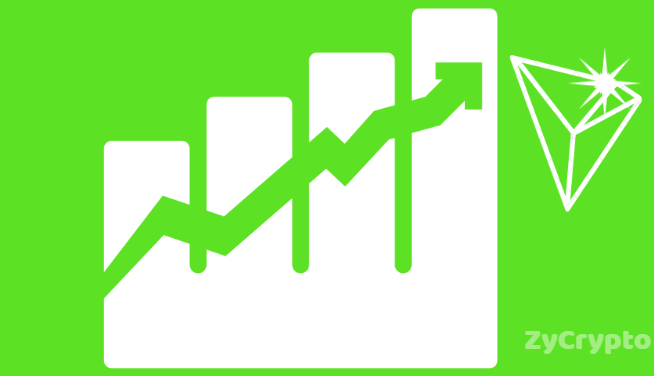 TRX is bullish in its medium-term outlook. The coin continues in a bullish trend yesterday, with the formation of massive strong bullish candles.  The bearish pressure was lost after a drop in the price of the cryptocurrency to demand zone of $0.023.
The bulls’ returned was confirmed by a bullish gravestone doji and price was up and broke the former supply zones of $0.024 and $0.026 before the end of the trading session yesterday.  Today, the 4-hour opening candle above the supply zone of $0.026 was bullish and TRX rallied towards supply zone of $0.028.
Price is above the 10-day EMA while 50-day EMA is below 10-day EMA with the stochastic oscillator 14 above 75 levels and it signal points down, thus signaling a downward movement as a pullback before continuing uptrend movement. Traders should be patient and wait before taking a long trade.
TRX/USD Short-term Trend: Bullish

The cryptocurrency enters uptrend movement shortly after a bearish run to the demand zone of $0.02, rejection to the further downward movement was seen with the formation of a doji and a bullish candle as the bulls made a gradual return and the price made some consolidation at the lower demand zone of $0.023. After consolidation, the price broke the former supply zones of $0.024 and $0.026.
Price was up to supply zone of $0.028 earlier today as the bulls sustained the momentum on the short- term. Price is above the two EMAs well separated from each other indicating further bullish movement. The stochastic Oscillator 14 is at the overbought region with the signal lines point down implies that the cryptocurrency may retest the supply zone of $0.026. Traders may take a long trade after the pullback to gather some green pips.