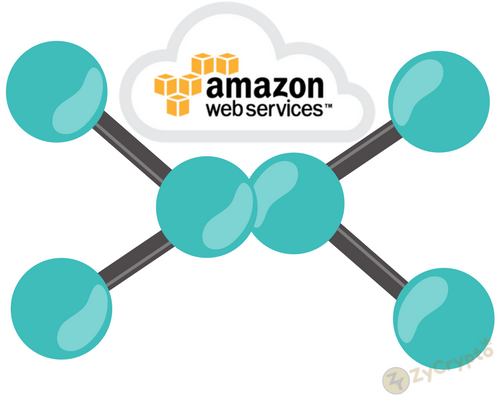 The cloud computing wing of Amazon, Amazon Web Services, has introduced a new service for the launch of ready to use blockchain networks for Ethereum as well as Hyperledger Fabric protocols, which can be either public or private and which can be made in a matter of minutes.
The announcement was made in AWS’s blog by its chief evangelist Jeff Barr. Barr wrote that these newly available templates in AWS allows their clients and customers to launch their own blockchain and hyperledger networks in just a few clicks and in a short amount of time. He also said that these templates offered are robust and scalable in order to fit different needs and uses.
The blog post also provides thorough instructions and guides for creating and establishing an Ethereum template with mining support as well as an EthStats page which displays metrics about network status among other things as well as an EthExplorer tool that displays transactions and smart contracts issued in the ledger.
AWS is the fast growing and the most profitable arm of Amazon’s various businesses. The number 1 cloud hosting provider in the world, AWS is known for best in class features and reliability at competitive costs.
The AWS arm of Amazon saw a growth of 55% in 2016 and 43% in the year 2017. Competitors of AWS include Microsoft’s Azure, which closely trails AWS and is very much similar and competitive, followed by Google Cloud and other cloud providers taking marginal share of the market.
Microsoft had earlier shown its interest in digital currencies by striking a partnership with the Ethereum start-up company ConenSys in the year 2015. Even Google is looking to gain entry in the blockchain arena, with Bloomberg reporting that the company is working on its own solution to provide to organizations and businesses using Google Cloud.
The blogpost by Amazon ended by saying that distributed ledger technology is the way to go and is at the forefront of any discussion related to technological innovations in the modern time period.
The post also said that their company, AWS, has committed to working with financial institutions and organizations to boost innovation and to allow for unhindered experimentation.
The large tech companies are trying their best to occupy as much marketshare as possible in the field of providing backend solutions for hosting blockchains of other networks, as they realize the huge potential the blockchain has and its ability to revolutionise the pay people conduct transactions.