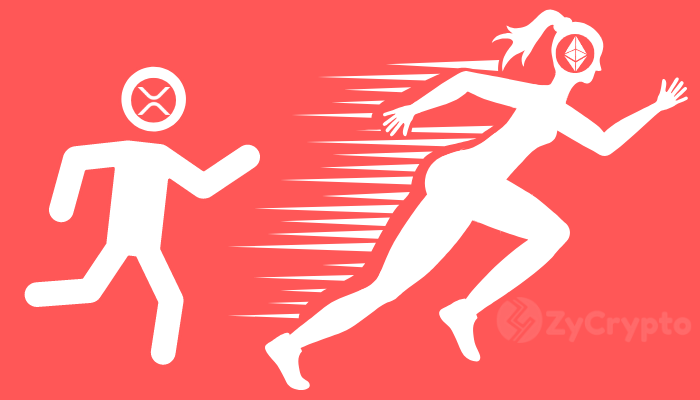 Some traders have only just begun laying out their trading plans for the new year, but with cryptocurrency coins and tokens, it seems their plans of overtaking are already in motion. With a head to head battle that had been running since the past 24hrs, Ethereum’s Ether has managed to stabilize in trading volume as it surpasses Ripple’s XRP to retain the second spot.

Ethereum’s Ether has just emerged victorious in what can be termed one of the longest-running battles between two tokens. With an upsurge in market capitalization, Ether has fully knocked out the XRP to become the world’s second most valued cryptocurrency. According to rankings, from coinmarketcap, Ether’s current market cap is currently an estimated to $14.98 billion at press time, in less than 30 minutes, this market cap will land at $15 billion. Not only is this a huge milestone for the Ethereum token, but this new market cap will also move Ether $1 billion higher than Ripple XRP which is currently at $14.71 billion.

Ether is back on track

As of this writing, Ether has raked in as much as 6.41% in gains and is expected to go as high as 10% to 15% if the token continues in its current pace. Its current trading price of $143.80 at press time is the largest it has attained since December 29th when it peaked at $147 and later dropped to the $130 dollar at the close of that day. We must credit OEX traders whose trading pairs of Ether against BTC has topped the chart with a trading price of  $164.94 Million since the past 24hrs. Trading pairs of Ether/SDT are also raking in gains with more than five exchanges seeing a boost of more than $60 million.

Meanwhile, Ripple XRP, although with gains of less than 3% has managed to push its market cap $14.71 billion, while this is not enough to combat Ether, there’s still a huge possibility for the XRP to make a  comeback between now and the next 24hrs.