The Cardano network is among the most interesting blockchain projects. The blockchain’s native cryptocurrency ADA is among the assets attracting the interest of institutional investors. The asset is already posting positive growth.

By the time of writing this article, ADA was trading at $0.08 with a market capitalization of $2.2 billion.

For starters, ADA is a major cryptocurrency that powers complex programmable transfers of assets in a secure manner. The Cardano platform is a smart contract developing platform that works to release advanced projects, unlike past protocols.

To increase the asset’s utility, the Cardano foundation has embarked on a mission to popularize the network in different parts of the world. The foundation is now focusing on Africa. Such developments are bound to have an impact on the price of ADA.

Such growth will definitely have a positive impact on ADA’s price. It has emerged that Charles Hoskinson who is the founder of Cardano, wants to push for the adoption of the asset in Africa. According to Hoskison, Africa has major potential when it comes to digital assets.

At the same time, Cardano is targeting the Asian market, specifically, Japan and Indonesia. If the initiative is successful, we should expect the value of ADA to spike. However, it is not clear when the initiatives will be rolled out.

While examing the prospects of ADA in the future, it is important to highlight that the development team has provided a solution for blockchain interoperability. This is a key development that will positively affect ADA’s value.

Additionally, Cardano’s recent partnerships will have a positive impact on the price. The foundation has signed a deal with Metaps Plus. Metaps Plus is a leading mobile company in South Korea and its collaboration with the Cardano foundation will attract more ADA users from the Asian region.

Based on these developments, we should expect some positive buzz around ADA. Note that the impact on the value of ADA cannot be seen at the moment because its market is on a ranging trend. 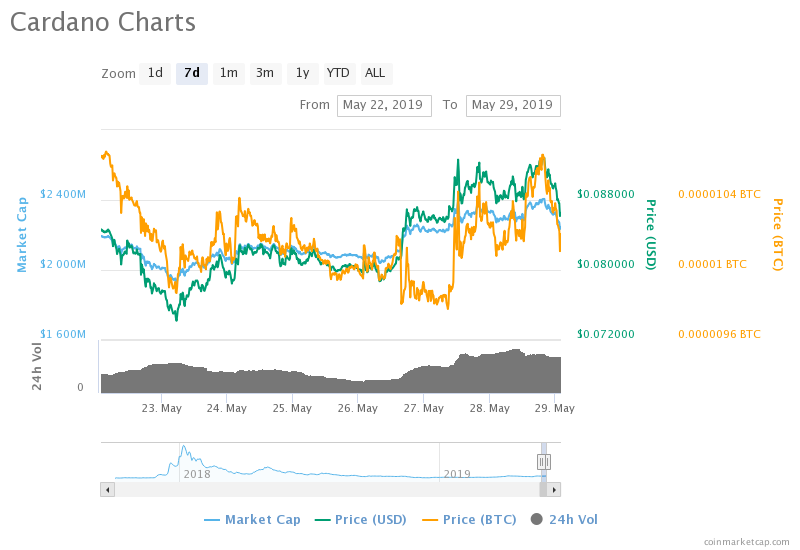 However, if the asset continues to gain weekly, we should see ADA trade higher. Furthermore, the cryptocurrency market usually relies on Bitcoin. A bull run by Bitcoin positively affects the entire market. If the current bull run by Bitcoin is sustained, then ADA should keep rising.