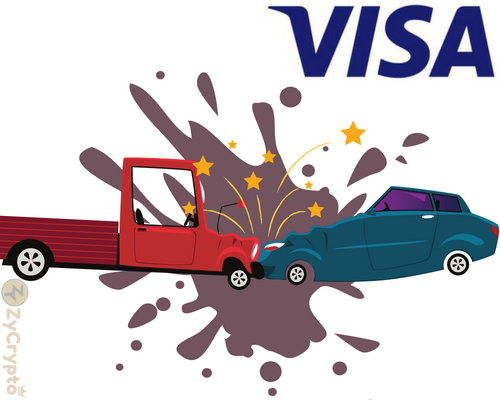 Shoppers around Europe are currently unable to complete payments with Visa Cards at checkouts following a network failure.
Visa represents the world’s largest payment platform and is widely used across Europe. However, the service has come short since 3:00 pm London Time, leaving users stranded and unable to pay for grocery shopping, train tickets and just about anything.
The reason for the massive downtime is yet to be made public with shopping mall especially in Britain opting for cash only checkouts until the issue is resolved.
Visa has confirmed being aware of the situation and said hands were on deck to resume payment processing for their distraught customers.

“We are currently experiencing a service disruption which is preventing some Visa transactions in Europe from being processed.”

We are investigating the cause and working as quickly as possible to resolve the situation. We will keep you updated,” Visa said in a 5:00 pm update.
While investigations into the causes of the failure are ongoing, Visa Card users are getting into trouble, and something obviously needs to be done as soon as possible.
One user, Liz Atkins had made a post on Twitter,
“@visa. On holiday in Sicily. Car hire has messed up and #visadown means card declined for trains.
We owe our hosts €350 and need to get to Palermo from Taormina for flights. Can you help please??”.

Understandably, the long downtime had raised questions about the continued reliance on centralized payment systems instead of a decentralized blockchain.
Popular blockchains manning Bitcoin and Ethereum, two of the most frequently used cryptocurrencies boast a 100% downtime and have transactions rounded up in just 14 seconds as with Ethereum.
Being decentralized also means there cannot be a single point of attack on the network, a feature Visa would no doubt wish to have at this moment.
With the rest of the world watching, it is becoming evident that maybe now is the time to start ditching central payment systems for the ever secure and always operational blockchain powered payment options.
Meanwhile, Visa Card users will hope it’s just a few hours glitch and that things get back to normal as quickly as possible.

Caving To The Mania: Rapper Meek Mill Invests In Dogecoin As DOGE Continues To Smash Records