In the last couple of days, TRON has announced the launch of the USDT issued by Tether on their blockchain network. The launch took months of preparation following the announcement that the two projects would be partnering. The stablecoin will be a TRC20 based USDT. And according to the Tron project, their based token is an upgrade from the OMNI protocol based USDT.

The Tron project has been eager to announce that its TRC20 based USDT is superior to the OMNI based USDT, used in Bitcoin and Ethereum. According to the project, the token will allow for a completely free and transparent process, a zero transfer fee, instant delivery, and holding and transfer via smart contracts on the TRON network. Furthermore, the project says that the token will allow users to interact with Dapps.

To celebrate the launch, Tron has also announced that in collaboration with Tether, the project will be giving away $20 million in giveaways to TRC20 based USDT holders.

TRX Fails To React To The Launch

The announcement which was already anticipated did not seem to affect prices for Tron’s TRX. The currently ranked 11th coin by market cap has been stuck within a price range of $0.026 and $0.027. 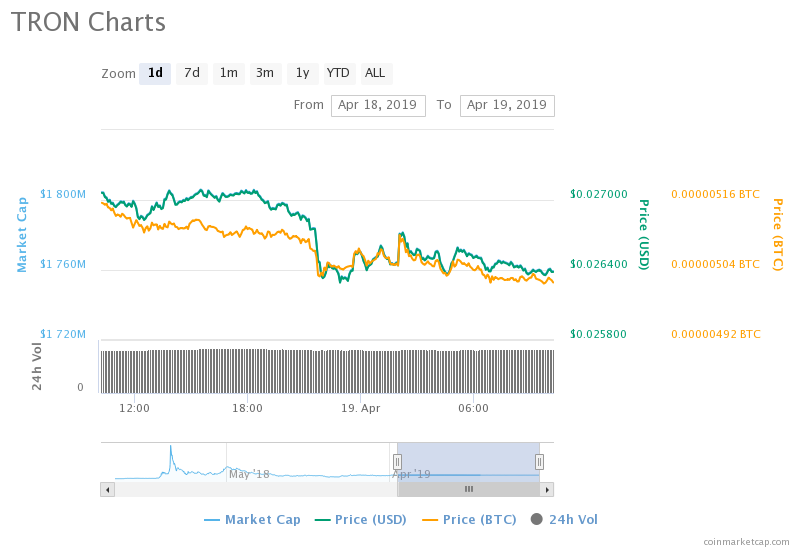 The coin settled within this range after dropping from a high of a little over $0.030. Although the high support position of around $0.025 is encouraging for its investors, the stalemate in the upward trend remains a worry for many.

This recent news comes at a time when all price movement in the market is being dictated by Bitcoin. The leader’s dominance in the market currently stands at a little under 52%. This shows that a majority of traders have exited Bitcoin and taken their money into Bitcoin.

While this has brought stability to the leader, which has seen the coin achieve great stability above $5,200 for the past couple of days, the same has seen a majority of altcoins turn red. This seems like a consolidation phase for the market bulls and soon they might be making a positive price move.

XRP Has Usurped Tether After a Massive 112% Price Explosion