The Tron project has risen to be one of the most popular projects in the industry in recent years. Much of its success has come from vigorous development and the project’s active team led by Justin Sun.

Though the project has not slowed down in its effort in recent months, its representation in terms of TRX prices has been on a drag. In the last couple of weeks, the coin has been trading on a tight range and has hardly responded to recent project developments.

At the time of press, Tron is nudging at the $0.030 position after a bearish couple of days. In the last couple of weeks, Tron has been stuck in the $0.025 and $0.030 price range. Today the market is seeing some fresh green and Tron is one of the cryptocurrencies seeing significant gains of over 4%.

Recent Developments Around The Tron Project

Just a couple of days ago, the Tron project announced that their token would be available to Opera web browser users. The Opera web browser will now support TRX in its built-in crypto wallet. The platform already has more than 300 million users from around the world and supports Ethereum and ERC-20 compatible tokens and Bitcoin.

The Tron project continues to dominate in dApps. DApps are growing fast due to their speed and cheapness taking away a lot of developers from popular projects such as Ethereum and EOS.

However, although Tron has had much to celebrate this year, the project has not had faults. In recent days there seems to have been trouble from within the project. The project’s CTO, Lucien Chen, has recently resigned from the project citing several problems with the project, this ranged from lack of “decentralization” to it being a gambling and funding project.

Following the resignation and allegation, the Tron project fired back saying that the CTO was fired early in the year for bribery and theft. However, the project failed to announce his departure at the time.

It still remains unclear who is telling the truth but whatever the case, this is attracting the wrong kind of attention for the project. 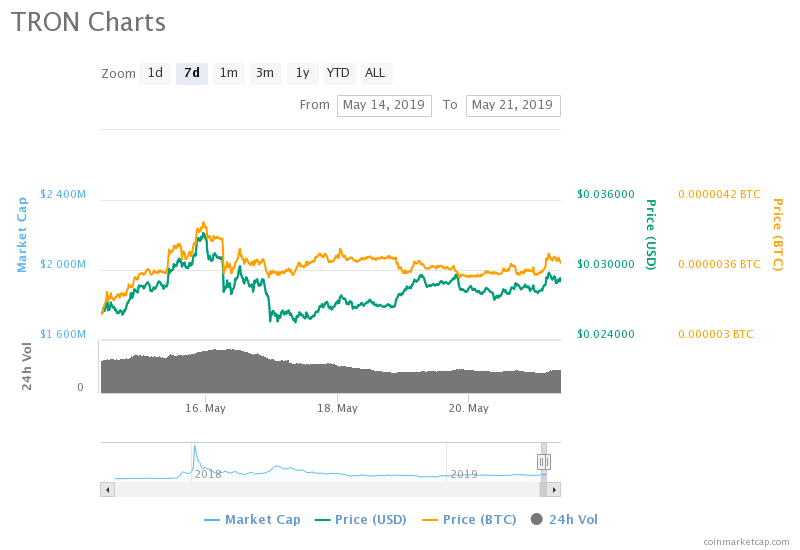 It is currently clear that the Tron project despite having issues with its management is on the right track when it comes to development and clearly has no issue when it comes to adoption. TRX prices will soon catch up with these developments and with key resistance positions dealt with such as $0.032 and $0.035, we can see TRX  soar to new highs soon.