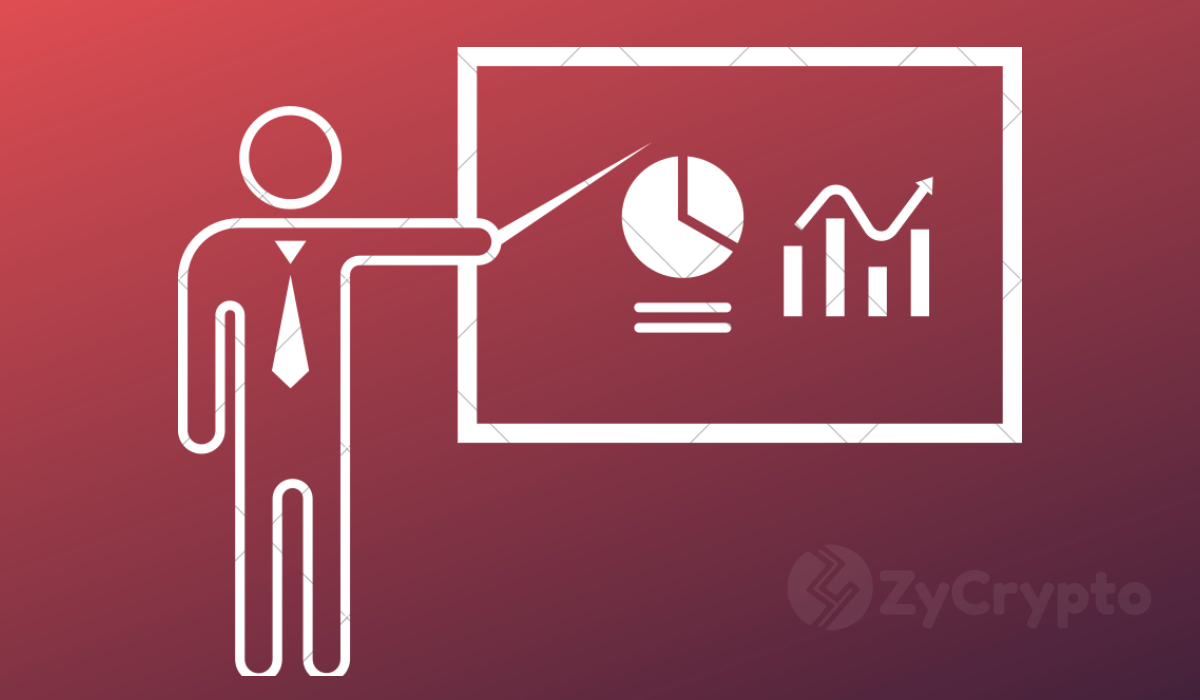 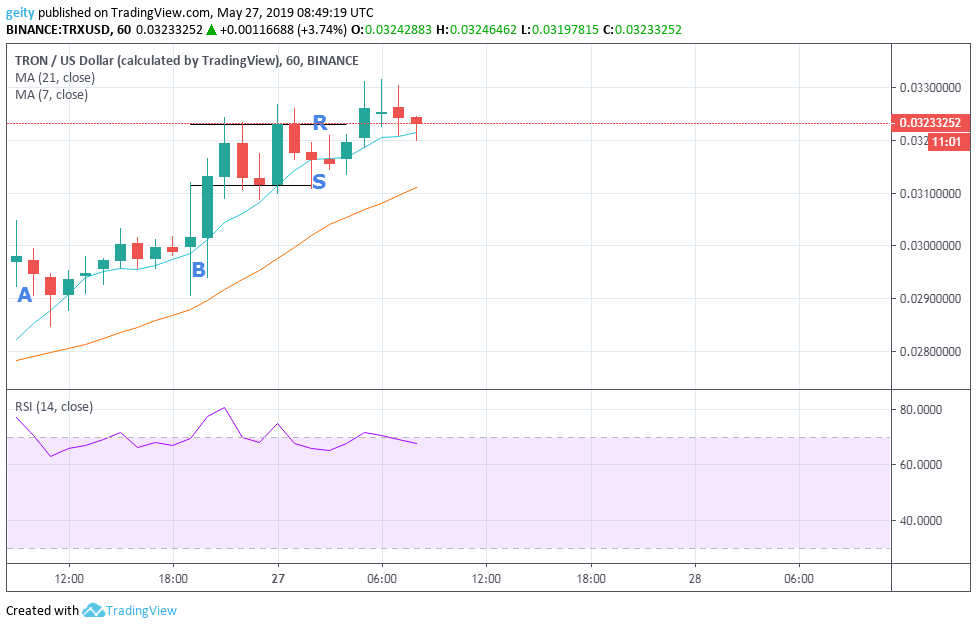 The general bullish outlook is seen in the last 24 hours where bullish regular divergence pattern is signaled simultaneously. An uptrend is observed and confirmed by the 7 day MA that is seen above the 21day MA.

This is therefore reflected by a strong buying pressure. The RSI is seen trading above 70 most of the times indicating overbought market rally. The cryptocurrency TRX began trading from $0.029796 around 26th May 09:00 (A), this was later followed by a period of consolidation (A to B).

At around 20:00 a bullish accumulation pattern formed that resulted to a breakout pushing price rally up to $0.030967.

The support level was therefore placed at $0.03114 and resistance level was placed at $0.032300, these significance levels were tasted severally. The current price of TRX is $0.03233 thus showing a price increase, this may be due to the announcement that was made a few hours ago by Justin Sun.

The RSI is heading south during the last 3hrs, thus indicates the possibility of price weakening hence a bearish signal may be considered. A new target to should be set at $0.03222. 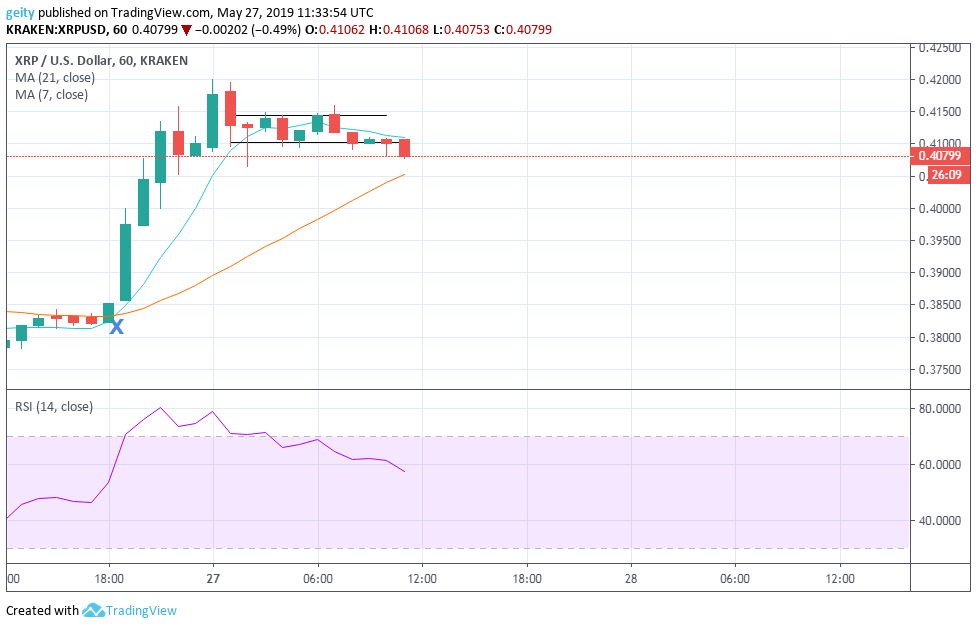 A period of consolidation lasted for 9 hrs with the 21-day MA being above the 7 day MA indicating a bearish signal.

Selling pressure is therefore signaled by the RSI which is seen below 50. At around 26th May 19:00 a breakout occurs with the formation of a marubozu candle showing that buyers have pushed the price performance higher to close at $0.41751, making X the best entry point.

The 7-day MA, therefore, crossed over the 21 day MA indicating bullish momentum. At around 26th May 19:00 and 27th May 03:00, the RSI is seen above 70 indicating overbought market,     a strong buying pressure was also reflected.

A sideways price movement was also encountered that brought XRP to the current price of $0.42499 this shows an increase in price performance.

The RSI is heading south during the last few hours this indicates that bearish momentum is likely to be seen in the next few hours.

New support should be placed at $0.40788 and stop-loss to be set slightly below or above the target in case of a breakout or a breakdown. 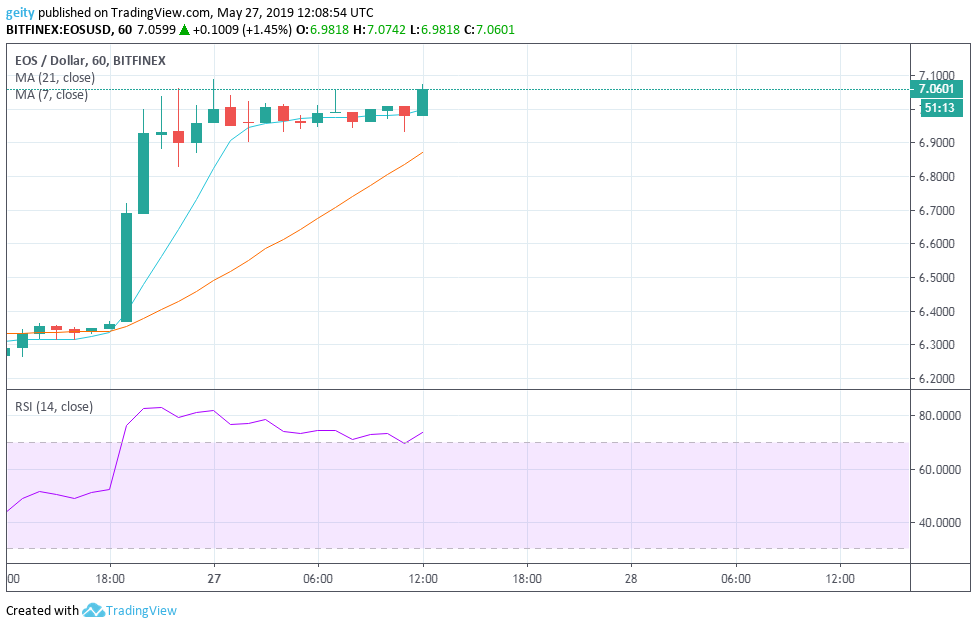 A bullish short-term outlook is seen in the last 24hrs, this has been proved by the moving averages where the 7-day MA has crossed over the 21 day MA indicating a bullish momentum and it has also been buttressed by a symmetrical triangle.

EOS began the day trading at $6.3331 with a period of consolidation that reflected lack of momentum in the market. Around 26th May from 13:00 to 16:00, the RSI is seen below 50 showing selling pressure in the market. Outbreaks, later on, occurred on 26th May 19:00 where buyers further pushed the price action up to $6.9282.

This was later followed by a long period of consolidation with the presence of Doji candles that indicated equality and indecision in the market from May 26th 21:00 to 27th 11:00.

The RSI is seen above 70 indicating an overbought condition that resulted in strong buying pressure thus brought EOS to the current market price of $7.44.

Due to a period of consolidation, an outbreak is likely to be seen. The RSI is heading north this indicates a strong bullish signal in the next few hours, the new target should be at $8.5.

XRP Finally Eclipses Highly-Anticipated Landmark – Where Are The Bulls Headed?

XRP Outpaces Crypto Market Gains: What You Should Know