XRP is now targetting the $0.5 price level following the recent report of Ripple’s partnership with Siam Commercial Bank, Thailand’s largest bank. By the time of writing, XRP was trading at $0.41 with a market capitalization of $17.3 Billion.

The latest partnership is expected to have a positive impact on Ripple’s price in 2019. Most specifically, XRP will be seeking to end the year above the $1 mark.

At the moment, the Ripple team is working hard to improve the network as it positions itself to be the main facilitator of cross border payments among financial institutions.

Over the last one month, the value of XRP has spiked by 21%. The third-ranked cryptocurrency once hit a 2019 high of $0.47 after dipping to $0.28. In the first quarter of 2019, XRP has shown slow growth after being affected by a few hiccups.

Despite the setbacks, Ripple’s price is on an upward trajectory.  With increased partnerships, Ripple is expected to cross to new heights. In 2019, XRP is already showing signs of steadily hitting the $0.5 mark considering the fact that it has surpassed this year’s all-time high of $0.38. 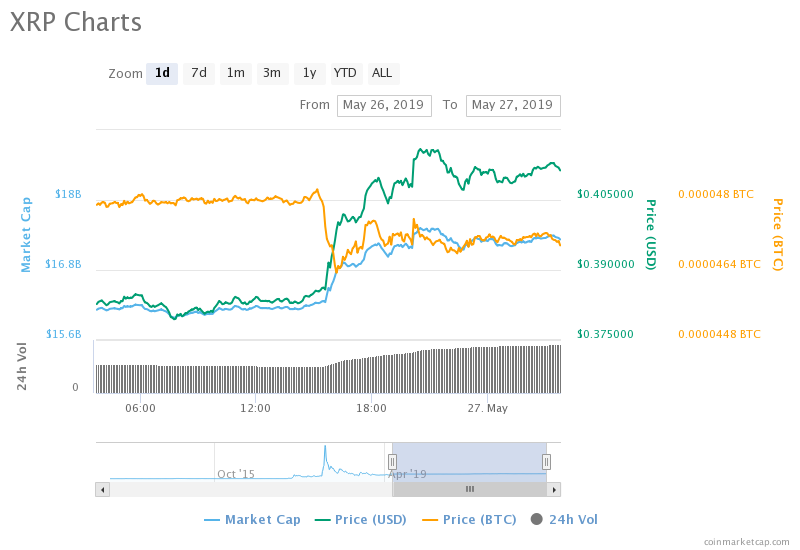 Before the SCB partnership was made public, Ripple was already working with the platform. Elsewhere, XRP has also been incorporated with WooCommerce, Gmail and Microsoft Outlook.

In general, Ripple is gaining popularity among banks as they start using DLTs to speed up their systems and reduce costs. For some time now, a number of banks have been considering the use of Distributed Ledger Technologies (DLTs).

On May 22, it emerged that XRP payments had reached the highest point since the 2017 bull run.

According to a chart released by Ripple, XRP payments was 104,653. This is a little lower than its all-time high of 118,756 attained back in 2017. It is important to note that, during that period the value of most cryptos was surging against the United States dollar.