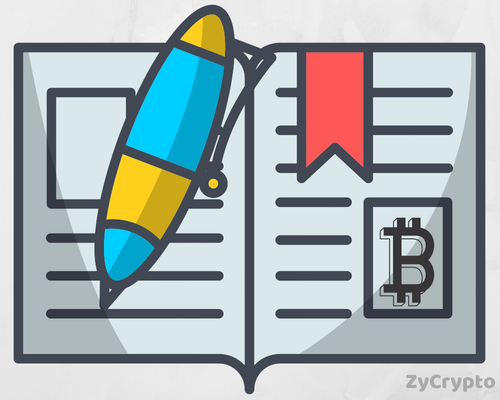 We verified the authenticity of the new Satoshi document using stylometric data mining methods and used Most Frequent Word culling to minimise bias in our model. Our findings suggest that Satoshi is back and that an autobiography is on its way!

The new Satoshi text, titled ‘duality’, was released on June 29 on the website http://nakamotofamilyfoundation.org . The text is a book excerpt for a new autobiography that ‘Satoshi’ plans on releasing. There has been much speculation as to the authenticity of the document and some have suggested that the writing style is different to the original Satoshi Nakamoto.

The ‘duality’ text was published around 11:45 pm on a website that was anonymously registered on an Amazon domain. A person acting as a proxy for Satoshi revealed the news to the online magazine Wired.

Satoshi claims that he wrote the autobiography to give people a better account of the Bitcoin movement. The excerpt contains details about the early days of Bitcoin and the future release will contain more interesting details. On the face of it there seems to be a large amount of information shared that only an authentic Satoshi would know about.
The new document claims that the pseudonym ‘Satoshi Nakamoto’ was akin to the English term ‘John Smith’. It’s like a default term that could even resemble the term ‘Jane Doe’. This seems to be in response to claims that the name Satoshi Nakamoto may be the name of a real person.

Satoshi also answered questions as to why Bitcoin was set to a 21 million limit. The answer seems to be that it was just an educated guess and an attempt to not allude to a number mentioned in the book A Hitchhiker’s Guide to the Galaxy. The book used the number 42 as the answer to life, the universe, and everything. Interesting enough, Gavin Andresen asked this question only weeks ago while wearing a badge that said his name was “Satoshi Nakamoto”.

The excerpt was released with a simple “cryptopuzzle” for people to solve that promised to name the two titles of the book sections to be released. The puzzle called them “Honne and Tatemae” which is a Japanese term that means separating one’s personal and private personas. The term seems to fit with the title of ‘duality’.

The excerpt also dedicates an entire page to the memory of Harold “Hal” Finney who played a vital part in the initial creation of Bitcoin. Satoshi mentions that Hal found the first bug in Bitcoin and was pivotal in prototyping the initial movement with his vision of a cryptographic currency.

Interesting enough, Satoshi mentions that there were serious reasons for anonymizing his identity and that these reasons may be revealed in the published book. Satoshi also reveals that he left the Bitcoin project in Christmas 2010 rather than April 2011.

This is another one of the undisclosed facts that could be verified by people close to the project at those early stages. Some have speculated that Gavin Andresen would be able to confirm such a detail. However, when Gavin was approached for comment he said he did not want to play the guess who is Satoshi game anymore.

Some people have disputed the text and claim that it contains too many grammatical errors to be Satoshi’s work. However, in the text, Satoshi claims that his style of writing has been relaxed recently due to growing older and being less worried about such trivial things.
We will now employ our stylometric methods to uncover whether the document is legitimate or not.

We cannot definitively prove that the text is authored by Satoshi because people can mimic the style of another person. However, we will make a strong argument in favour of Satoshi being the actual author by using clustering methods and Burrows’ classic delta. Our analysis amounts to a form of lie detection in that we are investigating whether the new Satoshi is telling the truth about his identity or not.

Our corpus of texts to analyze include a list of possible candidates including Satoshi, Gavin Andresen, Craig Wright, Nick Szabo, and Wei Dai. Our secret ingredient for this analysis was a method called Most Frequent Word (MFW) culling which can be used to limit the amount of subjectivity in our analysis.

For example, if we had 90% MFW culling this would mean that we would only analyze words that appeared in 90% of the texts analyzed. Our analysis clearly shows that the Duality paper has a similar style to that of Satoshi. 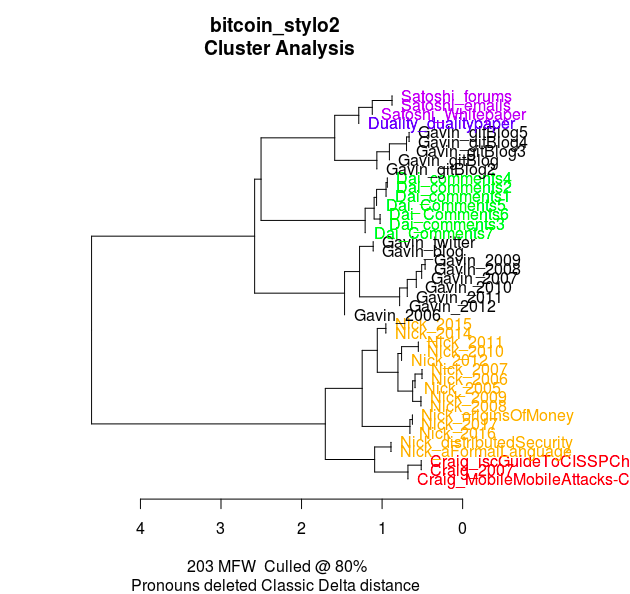 We also compared the Satoshi documents to over 100 cryptocurrency whitepapers to see if they would continue to cluster even in the presence of such noise. This analysis may be of interest in finding out what other whitepapers resemble the style of Satoshi as well.

As you can see our findings suggest that the Duality text is similar to the Satoshi documents even with all of the added noise from the whitepapers. The remaining whitepaper graphs can be viewed at the end of this article. 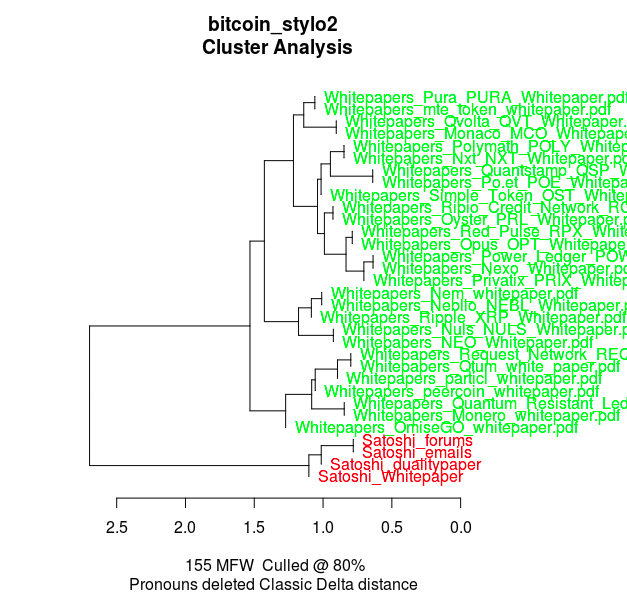 We even conducted a cluster analysis that included all of my articles to date to see if our method of MFW culling was accurate in distinguishing myself from all of the authors. Our cluster analysis found that my writing had a unique style that was different from the other authors. It is also interesting that our analysis clusters Craig Wright’s 2007 blog posts with his latest publications for nChain. 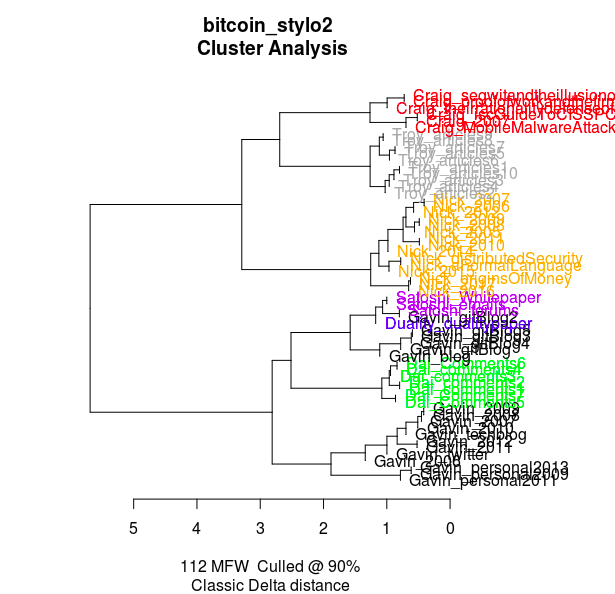 A final word of caution would be that our analysis does not definitively prove that the document was written by Satoshi as it is possible to mimic the style of another person. However, our analysis is a convincing argument that the excerpt is worth taking note of and the book would be worth reading if it ever does get published. 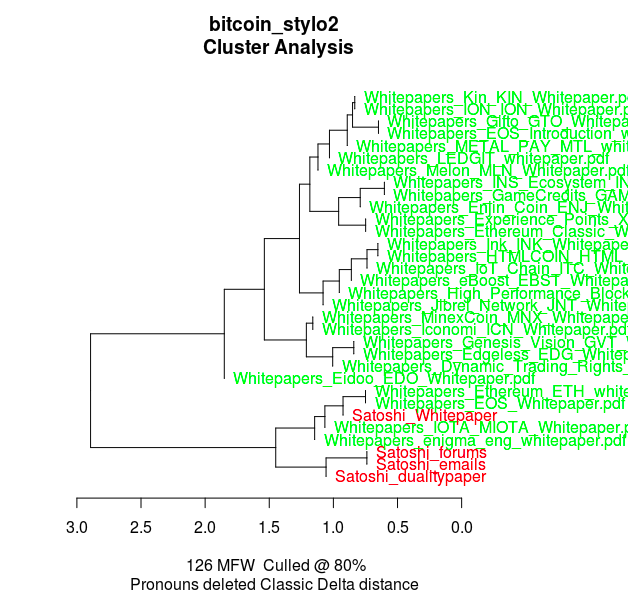 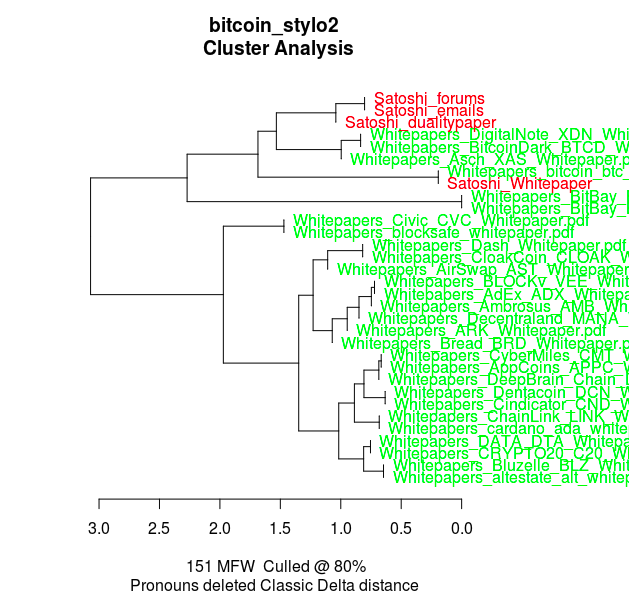 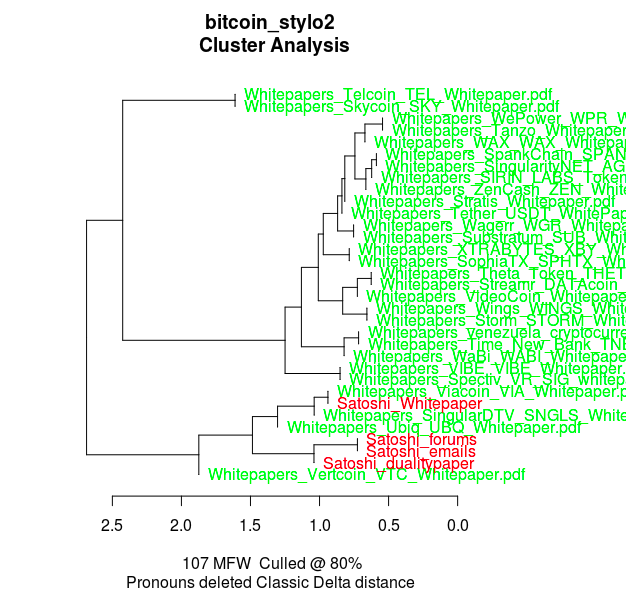