When the market was still struggling a couple of months ago, Ripple’s XRP was one of the few coins that were able to maintain above crucial support positions. For this, XRP was applauded.

As we reported a few weeks ago Binance research even released a report stating that it was the best crypto to diversify with, away from Bitcoin. According to the research, there was a low correlation between Bitcoin and XRP.

While this was good during the bear market, it has turned out to be a double-edged sword. During market surges, XRP has seemed to drag itself, making moderate and belated changes while others skyrocket.

Now in the last few days, after making a belated surge, the altcoin seems to have gone back into a slump again. XRP is currently stuck in a price range which is hurting its midterm bullish ambition. XRP has for the last couple of days recorded minimal changes only moving from $0.37 to 0.38 and vice versa. 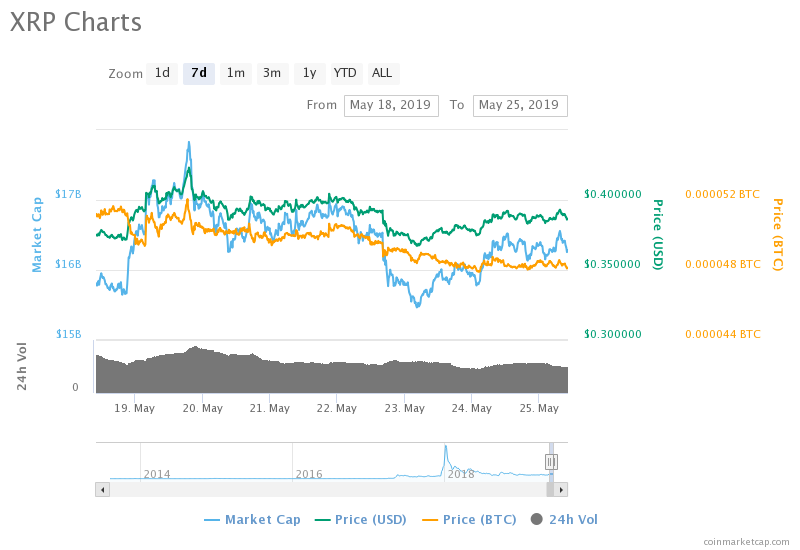 Although currently XRP is stuck on the $0.38 position, in the last few days the coin has dragged down as far as $0.36 before finding support. The coin has also not been able to climb as high as $0.40 since it dropped from this position mid-week.

The Bank for International Settlement (BIS) which is also the Central Bank for Central Banks has recently shown interest in cryptocurrencies and it is looking like XRP will the primary cryptocurrency they look into. According to reports, given the recent interest by BIS, XRP could be most suitable to adopt and a partnership could be cooking.

The BIS General Manager has been noted stating that digital assets are revolutionary but remain to be a good store of value.

With BIS already looking to enhance interbank relations and settlement, Ripple could find opportunity in this. Ripple CEO Brad Garlinghouse is an advisory board of the Swiss National Bank Conference where the BIS is attending. This could allow for talks between the two and could see a partnership emerge.

In the days to come a potential partnership between the two companies could see XRP prices skyrocket. For now, XRP bulls will have to continue pushing to get above $0.40 and in the mid-term attempt a retest of the $0.42 resistance position.