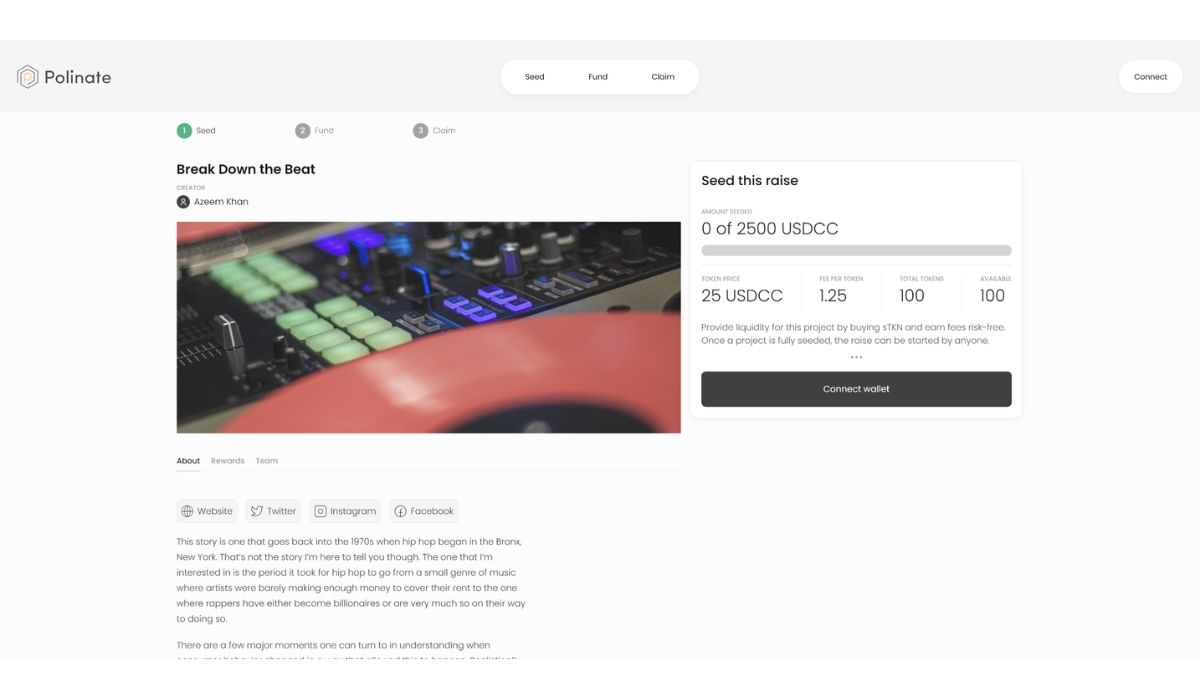 In the realm of decentralized finance, launching your decentralized app is analogous to taking your first step on a long journey. It isn’t all you need but it is a great start. Polinate, the crowdfunding platform that is leveraging blockchain technology recently announced the successful launch of its dapp. Following beta testing between the 2nd and 19th  of September, the platform launched on the 30th. The app currently has three main features; seeding, funding, and claiming.

With seeding, users can provide liquidity to a specific pool and after this is done, trading can commence with rewards also being available for purchase. The ‘fund’ area of the dapp is built to fund particular projects of the user’s choice. Funding the project involves buying pTKNs. It should be noted that pTKNs are not the native token of the platform.

The native token is $POLI and that can be traded normally like all other tokens. The pTKNs serve essentially as a subsidiary token and are built to make it easy to fund creators on the platform. These tokens when bought can be traded freely during the funding period and depending on the creator’s digression, pTKN holders will receive specific rewards once the funding period is over.  In the claiming section of the app is where users can claim rewards unique to specific projects and airdrops. The platform aims to incentivize investment in its creatives by allowing them to create rewards for the fans. These rewards along with other airdrops will be claimable from this tab.

Although only one creator is currently featured on the platform, Polinate has announced that four other creators from different areas such as magazines, gaming, design, and media will soon be brought onto the platform as the month progresses. Popular names that have been onboarded as native Polinate creators include Dianne Halloway of Aircapture, Jake James aka investment banker turned rapper, Izzy Lugo III the host of Strange on Purpose Podcast, Ayesha Syeddah the active contributor to Brown Girl Magazine, Ahmad Khan the gaming entrepreneur.

To access the dapp at this time, you will need to use a computer as mobile access is not yet a feature. Metamask is the platform of choice and users hoping to hop on Polinate will need to add the Matic Mainnet to their Metamask platform.

So far the dates that have been announced for the introduction of each new creator are that Jake James released his project and the next ones will be out soon. Currently, the dapp is available on the Polygon(formerly MATIC) network and can be accessed through Metamask.

Polinate also recently completed its IDO which went live on both Uniswap and Quickswap on the 31st of August and 14th of September respectively. The token $POLI was also listed on the popular centralized exchange, Gate.io on the 28th of September.

How is Polinate revamping the creator economy?

Polinate’s goal is to alter the narrative around project financing. Other crowdsourcing efforts like Patreon, Gofundme, and others have their own set of issues, and this one is an attempt to solve them. It’s much easier to get started with Polinate since the process is so simplified and just requires a few basic steps. Polinate provides a space for creatives where they may take their time on every stage of the way, from idea to conclusion.

There is a lot of liquidity available on the blockchain with many of it just floating around in personal wallets. It seems Polinate is looking to move those funds out of these wallets and blockchains and utilize them into supporting creators with good projects that need capital.