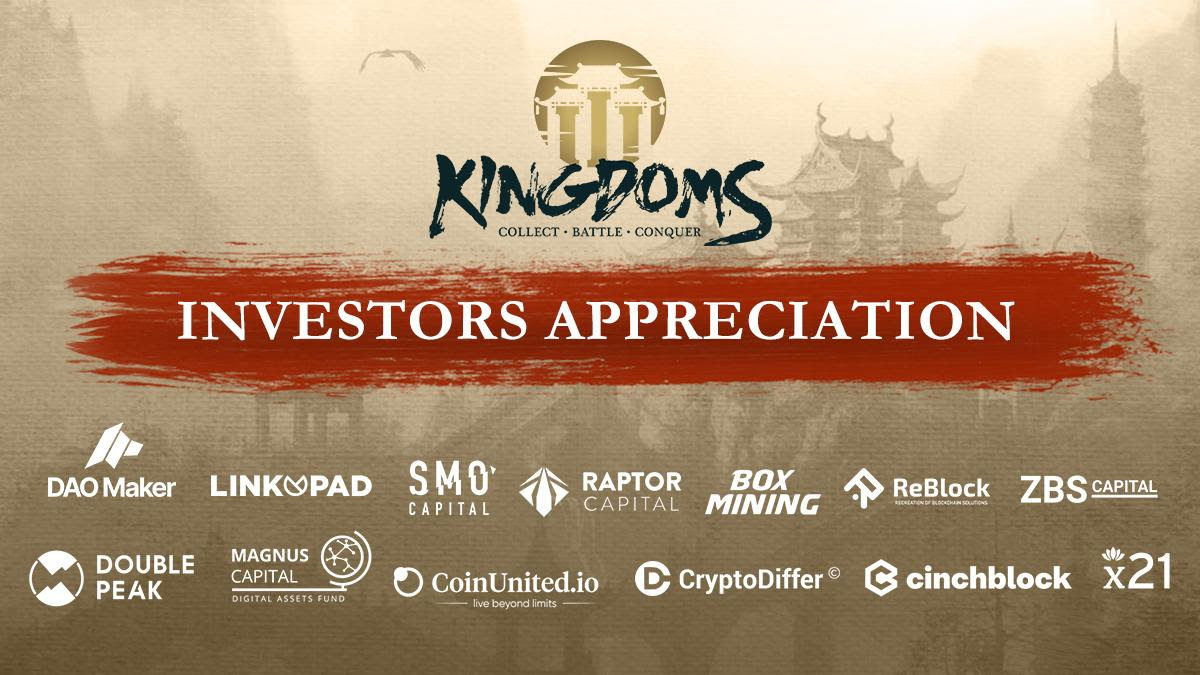 Three Kingdoms is proud to announce it has completed its investment round that raised $3.4 million.

As per the announcement, the funding round saw the participation of different key investors in the industry, including LinkPad, SMO Capital, CoinUnited.io, DAO Maker, ReBlock Capital, Double Peak, x21, ZBS Capital, and CryptoDiffer. The Three Kingdom also received support from its advisors, including BoxMininig, RaptorCapital, and Cinchblock.

Notably, The Three Kingdoms will reportedly use its newly acquired funding to innovate new projects while at the same time help grow its ecosystem.

Commenting on their investments, a representative from SMO Capital stated:

“We are proud to start a new journey with the highly talented team at The Three Kingdoms. As we enter a new frontier of compelling Play to Earn games, we foresee this sector increasing in the coming years. We loved the concept of The Three Kingdoms as soon as we saw it and then, after speaking with the team, were ever more eager to get on board. SMO Capital is looking forward to working with the team in bringing partnerships to help them succeed.”

The Three Kingdoms is a Play to Earn and metaverse gaming platform. The platform is based on the ancient characters of the historic Chinese classic ‘The Three Kingdom.’ The Three Kingdoms’ land is modeled after the historical map of China split into Wei, Shu, and Wu regions. The land will be split into unique squares that users could own. The closer the land is to the center, the more perks the owner gets. These lands will serve as platforms for users to host, stake, and monetize events. Users will use the lands, also called bases of operations, to fight and expand their territory and earn in-game NFT and currency.

A Representative from DAO Maker added:

“We are happy to work together with Three Kingdoms to push the GameFi industry forward in those exciting times. We wish their team great success moving forward. We are delighted to be part of the journey and assist the Three Kingdoms Team during their upcoming launch!”

The funding comes days after it announced its strategic partnership with CoinUnited.io, the largest cryptocurrency platform in Asia. This partnership is aimed at helping increase awareness of The Three Kingdoms to various communities. Notably, the platform is still under development and is expected to be released sometime before the end of this year.