The last two days have been nothing but a dream come true for Bitcoin (BTC) holders and backers. Starting from Tuesday, Bitcoin has surged from a little over $4,000 to hit a high of $5,200 early today.

Following this explosive move in the last couple of hours, Bitcoin encountered resistance right before $5,300, seeing a pullback to a little under $5,000. After a couple of minutes, this support allowed it to climb back above $5,000 again, where it is finally seeming like it will settle around for some time. 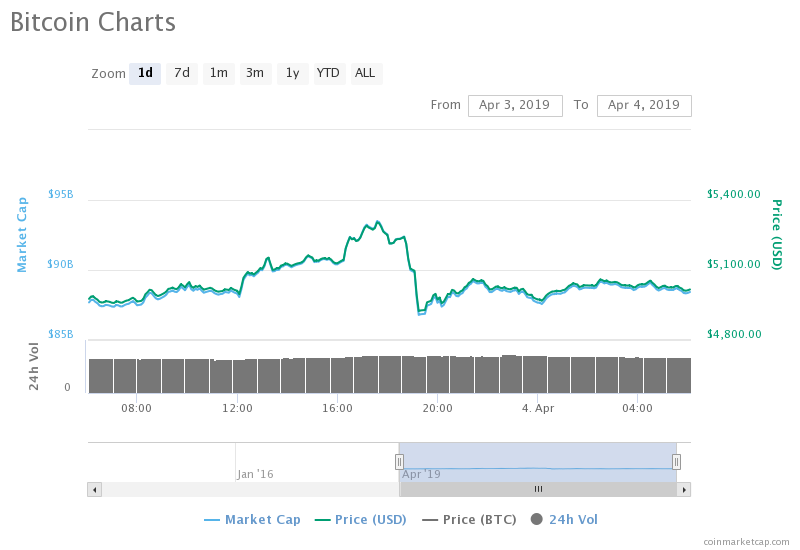 At the time of press, the coin is recording a gain of a little over 1% and its trading price at $5,038. Notably, trading volume is still high, over $21 billion at the time of press and this will definitely come in handy should another breakout be triggered.

With the coin now setting a new resistance position just above $5,200, this will be a key target and one that will help push Bitcoin to the $6,000 position. For now, it is key for Bitcoin to stay above $5,000. This has been a key target for the coin and one that dictates how the coin might perform in the coming months.

In the wake of Bitcoin’s found resistance position, other major coins have also encountered resistance in some crucial levels. Ethereum (ETH) after soaring to a little over $178, has pulled back and settled around $163 at the time of press.

XRP, on the other hand, recorded highs of $0.37 earlier in the morning but has also pulled back to settle around the $0.34 position. For these two coins, there is still much potential as they have been some of the lowest performing altcoins. Ethereum should well be reaching highs of $200 if the bullish momentum persists and XRP getting above $0.40.

Although the top three cryptocurrency leaders seem to have slowed down, some altcoins are still going up and hitting gains of up to double digits. Leading the charge is Bitcoin Cash which is up 21% at the time of press, and exchanging for well over $300.

Litecoin is following from a distance, going up by a little under $10%. Cardano, Bitcoin SV, and NEO are also recording substantial gains of over 4%.