Litecoin, unlike Bitcoin, has been a slow but steady asset in the cryptocurrency industry. LTC, which was one time the third most valued cryptocurrency globally has at this time falling two positions, now rating 5th according to CoinMarketCap.

Litecoin’s success story over the years cannot be written without mentioning the efforts of its founder, Charlie Lee. Lee happens to be one of those not moved by the price but wants to see cryptocurrencies achieving their goals shortly.

Luckily, for Litecoin and its community, the cryptocurrency in the past few days has started receiving some attention with Litecoin’s price hitting the $100 mark, which has been significant resistance in a while.

Litecoin Back To The $100 Price Mark 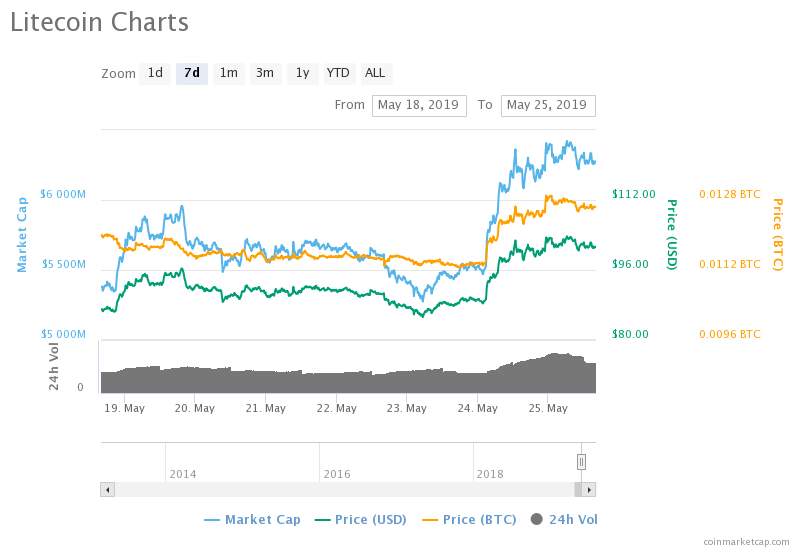 2019 seems to have favored the 5th placed cryptocurrency. Since the beginning of the year, Litecoin has been on its present uptrend after a drastic fall from its all-time high towards the end of 2017.

At the time of writing, Litecoin sells at $101.53. This would be its third attempt at this price level.

On May 16, 2019, Litecoin made another attempt to break its former resistance level. The coin made a high of $107.60 before ending the day on a bearish note as the bears took over, causing a slight pullback.

Though Litecoin struggles at the present level, a successful attempt on $110 could see Litecoin aiming for its all-time highest point once again.

According to TradingView chart on LTCUSD, RSI indicator, 14 period seems to be making lower lows in contrast to what the candles say. Traders should, therefore, be aware as there could be a possibility of another round of bearish days.

Litecoin in recent years has been focused on widespread adoption of its cryptocurrency rather than focusing on trading and investors.

ZyCrypto on April 18 reported Litecoin’s most recent adoption story. Sportsbet.io, one of the industry’s leading platform, announced it had added support for the Litecoin cryptocurrency.