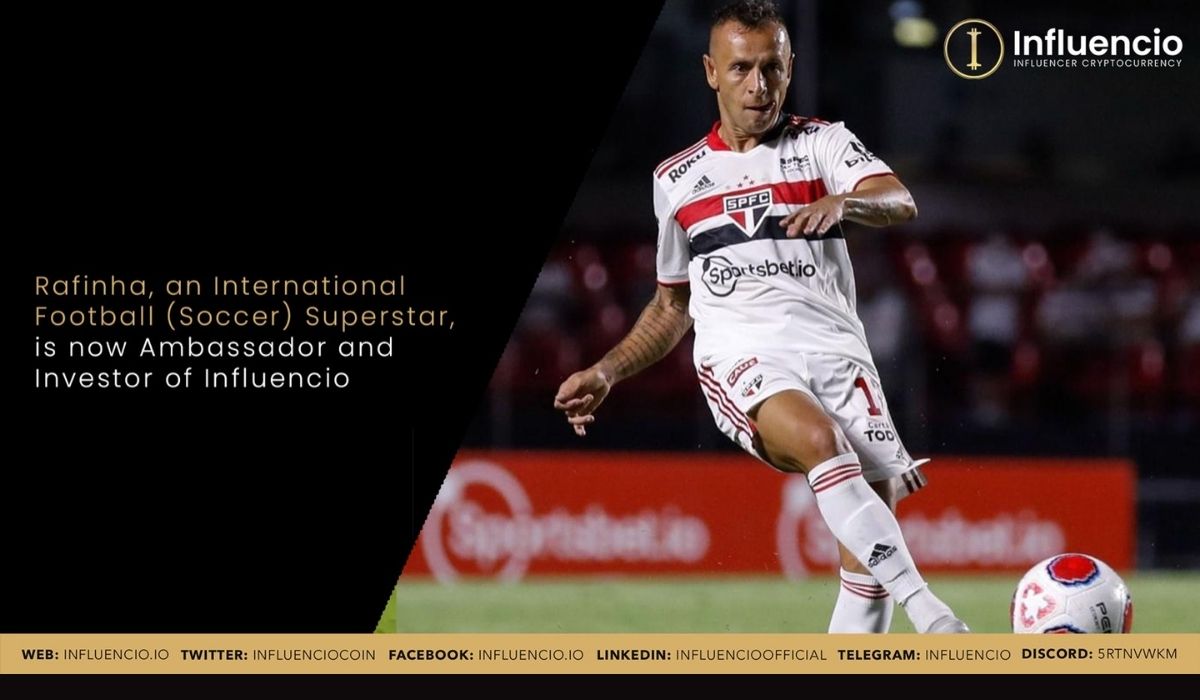 Summary: Rafinha, a world-famous football player with over 6 million followers, is now an Ambassador and investor of Influencio, a blockchain influencer marketing platform. Rafinha will help scale Influencio’s community across Europe and Latin America.

STOCKHOLM — MAY 2, 2022 — Influencio, the first dedicated blockchain influencer marketing platform, which also incorporates NFTs, GameFi, SocialFi, and the Metaverse, developed by Technicorum Holdings’ subsidiary Gravitas International Associates, announces Rafinha, a global influencer and popular football player in Europe and Latin America, is joining Influencio both as an Ambassador and investor.

Marcio Rafael Ferreira de Souza, better known as Rafinha, is a Brazilian-German football player. He enjoys a successful career in top football clubs, such as German FC Bayern München, FC Schalke 04, and Greek FC Olympiacos. Rafinha won numerous awards and championships, including the global ones at the level of UEFA and FIFA, and represented the Brazilian team in the Olympics.

Loved by his fans, Rafinha boasts a massive online community of dedicated followers: 3.5M of them on Instagram, 1.5M on Twitter, and 1.3M fans on Facebook. As an Ambassador and investor of Influencio, Rafinha will help introduce unique features and benefits of Influencio to his community of fans across Europe and Latin America.

Commenting on joining Influencio, Rafinha stated “My followers are like another family to me. I am always happy to present them inspiring new projects. That is why I joined Influencio. The team here is creating a platform that will take the engagement level between followers and public figures like myself to the next level, creating earning opportunities along the way.” Rafinha added, “I am eager to start and show to my community what Influencio is all about.”

“We are very excited to have Rafinha onboard as an Ambassador and investor. It clearly demonstrates the high level of trust in the Influencio project when such megastars as Rafinha decide to join us. At the same time, it is a great confirmation that Influencio is needed in the market and we are on the right track with building the product.” stated Daniel Daboczy, CEO of Influencio. “Thanks to Rafinha, Influencio will now be introduced to a truly global audience.”

Influencio has been consistently attracting interest from investors, influencer community, famous public figures, and crypto enthusiasts. Having recently finished the first successful funding round and a public token presale, the final token presale was launched directly on Influencio’s website on 19 April.

Influencio’s new INFLUENCE and ACTS cryptocurrencies (BEP20 tokens) are designed to address friction and monetisation within the growing global influencer market. The project is supported by the most prominent YouTubers and influencers in South America, Europe, Nordic countries, and Asia. It will soon have a fully global presence as well. The project is led by CMO Danjal Kanani alongside CEO Daniel Daboczy. Influencio solves key market challenges using blockchain and NFTs with DeFi, GameFi, and SocialFi elements. Influencio streamlines payments and processing, content marketing management, interaction monitoring and offers FinTech solutions to the industry.

Technicorum Holdings comprises several subsidiaries, some of which are regulated and specialize in various industries in the field of digital assets, DeFi, GameFi, SocialFi, the Metaverse, etc. Its fully owned subsidiary, Gravitas International Associates Pte Ltd, is a Singapore-registered Fintech company certified by Singapore FinTech Association as an authorized blockchain & DLT provider, e-wallet, core banking, digital exchange Platforms, digitization and tokenization, platforms, products, and services. The Technicorum group has numerous reference projects and clients, including over 100 ICOs/IEOs/IDOs/STOs completed through its subsidiaries over the last four years.