In the past 48 hours, bitcoin has been unstoppable, booming almost four times to hit, $12,876.91, bagging 61.8% dominance of the total cryptocurrency market. It has however not been the case for most altcoins as they struggle to pump further alongside the strongly rising crypto leader.

The question in the minds of crypto investors and traders who were yet to enter the bitcoin market is whether it is too late. In the long term, the answer to this question is no. But as we speak, investors can still put some amounts of capital on altcoins, although this has by and large not paid off much.

When compared to bitcoin, the third largest coin by market cap remains undervalued, just like other altcoins. History, however, shows that XRP has managed to grow from these lows. As aforementioned, XRP overshadowed ethereum twice in less than a week in 2018, to take its place as the second largest crypto by market cap. 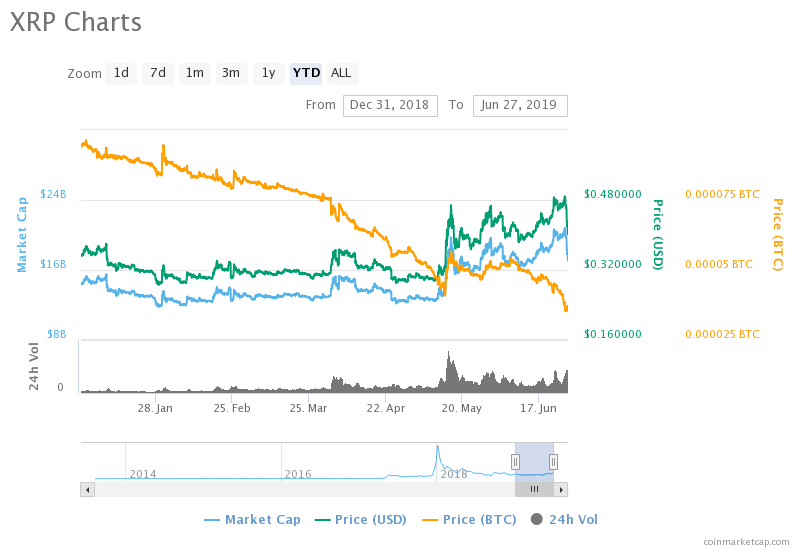 This year in May, the price of one XRP rose to $0.45, which was the highest price attained since December 24, 2018. During this cycle, enthusiasts believe that even if bitcoin corrects, which is bound to happen, there will be no four-figure bitcoin to purchase. As this, investors will be attracted to invest in Ripple’s XRP because analysts believe XRP might easily outperform other cryptocurrencies.

On June 17, 2019, Ripple, the company behind XRP cryptocurrency, announced its partnership with MoneyGram. Even though this $50 million partnership caused a brief price rally of XRP upon its debut, enthusiasts are hopeful that in the near-term, this partnership will sure cause an anticipated price surge to breach the resistance at $0.5.

Do Other Altcoins Stand A Chance?

Supposing that there is a repeat of 2017, altcoin holders might be on their way to celebrating again. Most altcoins have dwindled in losses recently with the recent bitcoin price uptick, some declining by up to 80% from their previous ATHs. Therefore, if a paradigm shift is in the cards, altcoins have a great potential for significant gains, with XRP leading the way.