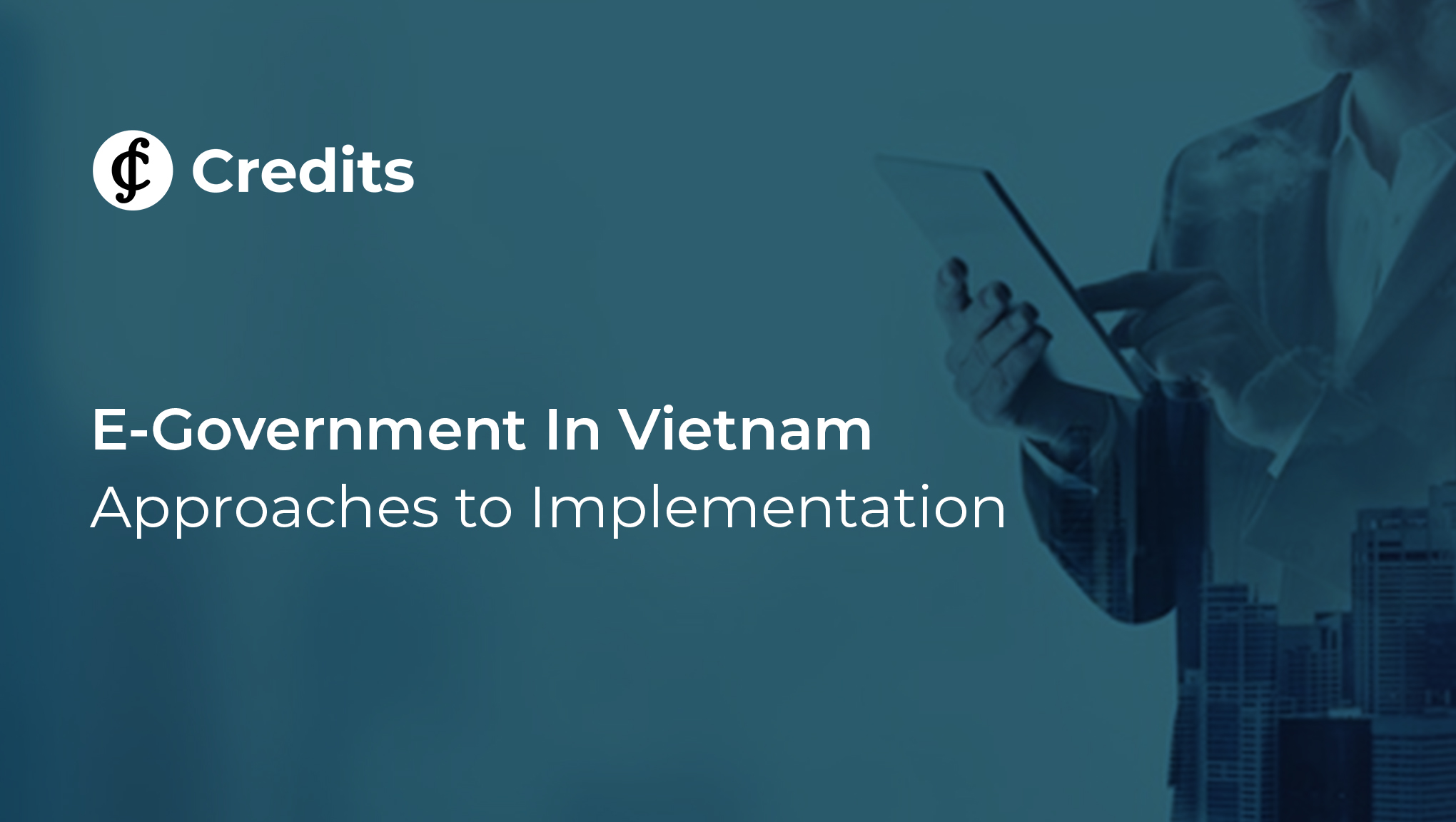 Any government, no matter how coherent and effective in the eyes of the people that had elected it or the elected is still subject to flaws, corruption, inefficiency and time lags. Technologies have largely streamlined government processes, such as elections, document workflows, and others, but the key concepts of effectiveness and efficiency still rest on the link binding the technology with the population – the human factor. It is the human factor that runs governments, and humans are prone to a myriad of faults ranging from banal errors in calculations and document workflows to corruption and even spite in performing their duties.

To counter the human factor and take advantage of management systems, the concept of the E-government was proposed in the early 2000s. So the E-government concept is not that new, as it involves the use of various technologies, such as communications devices, computers, and the Internet to ensure the effective and efficient provision of public services to the citizens of a country. The keywords here are “effective” and “efficient”.

When taken in the context of an entire country, efficiency means saving finances and ensuring convenience in the provision of services to citizens. Effectiveness means making sure that the services are rendered with due quality and with minimal error. This is where the appearance of blockchain technologies is set to play a key role in the future of E-governments as a whole.

Advances In The Achievement of E-Government Implementation

The countries of the world were quick in realizing the advantages of applying E-government approaches in the provision of public services. Every continent already has some measure of E-government applied. The countries of Southeast Asia and the Arab Gulf are the leaders in using technologies for providing their citizens with convenience in paying utility bills, ensuring transparency and efficiency with fiscal services, and workflows for various licenses, permits, and other documentation.

One of the countries leading the charge in applying E-government approaches is the Socialist Republic of Vietnam. The Deputy Minister of Information and Communications Nguyen Minh Hong recently announced that the Vietnamese Government is aiming to enact Resolution No. 17/NQ-CP on the Digital Government Development Plan for 2018-2020 up to 2025. The ambitious goal will be supervised by the National Board of E-Government Review with Prime Minister Nguyen Xuan Phuc at the helm.

The main aim of the Resolution is to improve Vietnam’s E-government standing on the United Nations assessment list from level 10 to level 15 by 2020. If successfully enacted, by 2025, this will propel Vietnam to the top of the ASEAN countries list in E-government implementation.

The integration of multiple ministries into the E-government system will ensure lower error rates and improve interoperation between authorities, thus speeding up document workflow processes and bolstering GDP growth. Still, the poorly developed legal frameworks and regulations that manage the interaction among various authorities and ministries are a significant challenge that the implementation of E-government is called upon to overcome.

In essence, given its strategic location, immense economical potential and the challenges present in the country, Vietnam is the ideal location for implementing an E-government.

The Role of Technologies In Shaping Vietnam’s E-Government

Technologies are the key link in securing the implementation of the E-government concept in any country seeking to automate administrative processes. The use of advanced technologies, namely blockchain and other similar solution, in creating a unified data sharing system for all government databases will lay the foundation for ensuring successful implementation of the Resolution starting in 2019. Given the situation with technology literacy in the 95 million citizen country, the Resolution aims to integrate up to 20% of all residents and businesses in the E-government system.

ICT (Information Communication Technologies) are at the forefront of the strive to achieving E-government. The extensive use of databases and high-speed internet connection is a must, but the creation of the supporting infrastructure will ensure effective operation of the entire system. The specifics of Vietnam’s geographic location make the use of internet cables problematic in many regions, in addition to the lack of a sufficient number of highly qualified personnel for maintaining the system operational.

The introduction of advanced education programs is one of the first steps that the Government of Vietnam is taking in incorporating technologies with the main element they will be serving – the citizens of the country.

The Application of Blockchain In Achieving E-Government in Vietnam

The advent of blockchain technologies has changed much in the way ICTs have affected the perception of technological advantages in the eyes of many governments. Unparalleled speeds of operation, full transparency of all records, immutability, tamper-proof qualities and many other boons are offered by blockchain, and all of them can serve Vietnam is attaining higher levels of E-government integration.

Given that bureaucracy is the bane of many countries, including Vietnam, the introduction of blockchain technology with its auto-signatures and automatic consensus can solve the issue of cumbersome document verification procedures in government authorities. Many bureaucratic processes in Vietnam are age-old, as in many countries, but blockchain has the technological qualities necessary for granting citizens the trust element needed to negate the requirements of multiple physical signatures in obtaining permits, licenses and other documents.

One of the main disadvantages related to E-government that is being constantly addresses is the lack of equality in public access to the internet. The so-called “digital divide” is an acute problem in Vietnam for citizens living in remote regions. But the application of blockchain on the basis of a reliable infrastructure can solve many of the issues associated with digital literacy. The technology does not require users to be highly computer-literate to be able to obtain the necessary public services backed by the technology.

Full access to the data is yet another important use case of blockchain in E-government. Given the full accessibility, transparency and immutability of data records stored on the blockchain, government ministries, such as the tax authorities, can send their citizens requests on the use of any part of the data. The citizens have full control over their records and can grant permission for its use.

Legitimacy of voting has always been a problem for governments and blockchain is the perfect solution. The independent, technologically-ensured and high speed combination of immutability of records and full transparency act as guarantees against public disagreement with voting results.

The challenges blockchain technologies can solve are numerous and it is difficult to overestimate the contribution they can bring into ensuring Vietnam’s transition to higher degrees of E-government implementation.

Blockchain solutions have already been applied by a number of governments in test and live modes. The Credits platform is one of the most flexible and comprehensive solutions on the market for the implementation of E-government. With its advanced technical characteristics, the Credits platform can provide the necessary infrastructure and instruments for ensuring blockchain-based communication between the citizens and the state.

The intuitive interface is designed for use by citizens with low levels of digital literacy and ensures comprehensive operation and effective adoption of services provided by E-government systems. At the same time, the Credits platform can be tailored for use for an endless variety of services in which operations are carried out using smart contracts and the internal CS currency.

One of the key advantages that Credits offer in terms of application in E-government systems is high network capacities of up to 1 million transactions per second with transaction processing times at 0.1 seconds and low fees starting from 0.001 USD per transaction. Credits offer a comprehensive infrastructure for developing blockchain-based apps with self-executing smart contracts. The use of smart contracts is the main factor for facilitating the effective application of E-government concept by combining multiple mechanisms of citizen-state interaction in one technologically convenient, immutable and secure carrier. The source code eliminates the risk of unauthorized changes and ensures the uniqueness of the execution of the contract’s algorithm. With no intermediaries in the chain of interaction between the citizen and the state, the provision of public services through the use of the Credits blockchain platform becomes instantaneous and surpasses trust issues.

The Credits platform currency (CS) can be used for conducting real estate transactions, transactions with public budgets, paying taxes, utility services bills and any other fees. The Credits platform offers a secure environment for data processing and transmission with failure-proof systems operating on a unique consensus algorithm combination of DPoS and BFT and advanced data encryption. All Credits platform transactions are recorded in a common ledger and available upon request by any authority or user with sufficient access rights to the database.

The global practice has already proven that the use of cryptocurrencies and smart contracts can reduce state corruption by eliminating intermediaries. Blockchain technologies turn every interaction into a direct transaction between the citizen and the state, thus removing the human factor from the equation.

Technologies are a prerequisite for improving national welfare and increasing economic growth. Blockchain technologies are playing a key role in enhancing this process as irreplaceable and valuable infrastructures and add-ons to existing solutions.

“There is no doubt that blockchain technologies will play a vital role in leading Vietnam to full E-government use. The technology has advantages and we have the will and the resources to consider it as a valuable contributor to our nation’s welfare. I am certain that in the coming years we will see mass adoption of blockchain in Vietnam on the government level,” as said by CEO of ONPUN Phạm Quang Trung.

The digitization of governments is vital in the modern world, where the increasing interconnection of various systems is having a direct impact on citizens and the state alike. With economic prosperity becoming ever more dependent on technological literacy, efficiency and effectiveness of document workflows and legal frameworks, blockchain solutions like those offered by the Credits platform seem to be the ideal infrastructure for building a more digital and transparent future.