According to CoinMarketCap, Cardano (ADA) is currently ranked in the 10th position after an eventful 2018.  In 2018, Cardano underwent management changes alongside the utilization of its blockchain by the key firm. Despite a turbulent 2018, Cardano is still one of the most layered and prominent blockchain projects.

2019 is looking promising for ADA with the upgrade of the Cardano mainnet to version 1.5. This upgrade means that Cardano is inching closer to shifting from the current Byron phase to Shelly development phase. In the effect, Cardano will have the Ouroboros Genesis proof-of-stake consensus protocol to Cardano. The Cardano roadmap comprises of fives stages, namely; Byron, Shelley, Goguen, Basho, and Voltaire.

Following the Shelley upgrade, the Cardano blockchain will be fully decentralized. This is an important factor within the community. Additionally, we expect to have stability, interoperability, and governance. The Cardano team has noted that the arc of development, Cardano’s protocols will increase in complexity, interdependence and use additional exotic cryptographic primitives.

The Shelley upgrade has three top functions, incentives, delegation, and networking. The incline is set to rally the value of ADA giving the asset an opportunity to attempt to overtake XLM and BNB.

The stability, interoperability, and governance that come with the slope will be the greatest spinning wheel for the rise of Cardano. The rally will depict ADA’s real value in the crypto market. 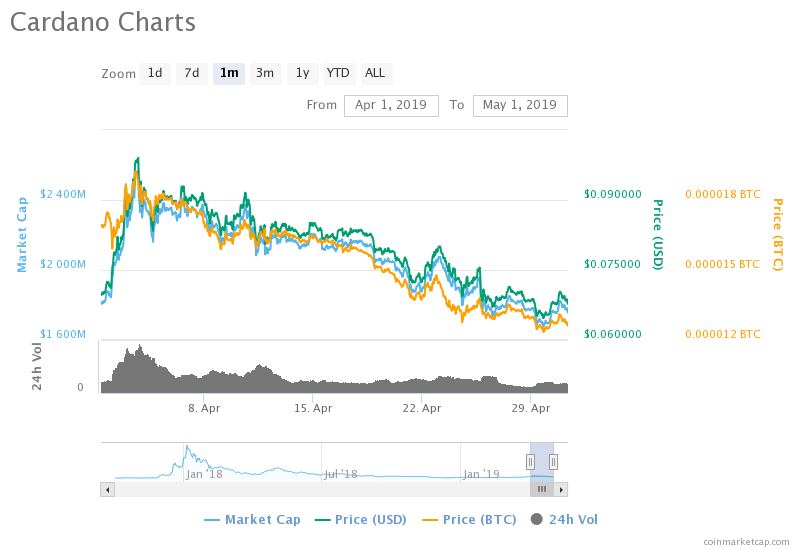 Already, ADA is rising on its daily and weekly charts indicating a rebound against fiat despite the bear market. Furthermore, Cardano has a strong positive community, backed by a solid roadmap that should set the set stage for a rally above $0.1.