The delisting of the Bitcoin SV which took place on the 15th of April has left the entire cryptocurrency space in a state of unrest. As reported earlier, BSV investors are supposedly preparing to file lawsuits against some of the involved exchanges.

While the situation has now taken an intense turn as more exchanges, the most recent of which was the American based exchange giant Kraken whose delisting of the BSV token took place yesterday, the value of the BSV token is surprisingly not being flushed down the drain as was anticipated.

While the BSV token took a swift decline of 21% at the time it was delisted, the token is currently taking an upscale with a rise in trading volume that has increased by 9.12% at press time, leaving the trading price at $60.16 at the time of this writing. 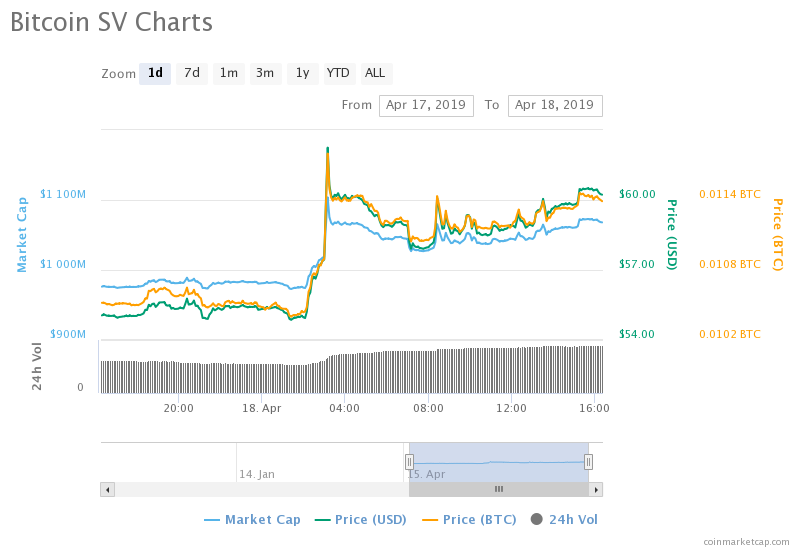 BSV which had once claimed the 10th spot in the rankings is now struggling to build momentum at the 14th spot against its new rival Dash. Despite this, traders seem to be pumping up the token thanks to traders from Okex and BitMart whose trading pairs have skyrocketed to $14.94 million and $12.82 million respectively.

Meanwhile, the reduction of adaptation as regards to the recent happenings are definitely evident as the token’s price has taken a downturn. Cracking at a price of $71, BSV dropped by more than 3% the same day as it hit a low of $59.03.

On the 16th of April, the token managed to hit $61.42 but later dropped to the $50 mark. In the same fashion, trading volume and market capitalization have diminished significantly.

Between the 15th of April till present, BSV has lost more than $111.75 million in trading volume while market cap has dropped by $69.81 million. Conclusively, the future of BSV is very unpredictable. Other than the fact that the BSV token will continue to lose value as regards to the new developments, the token is currently on survival mode.