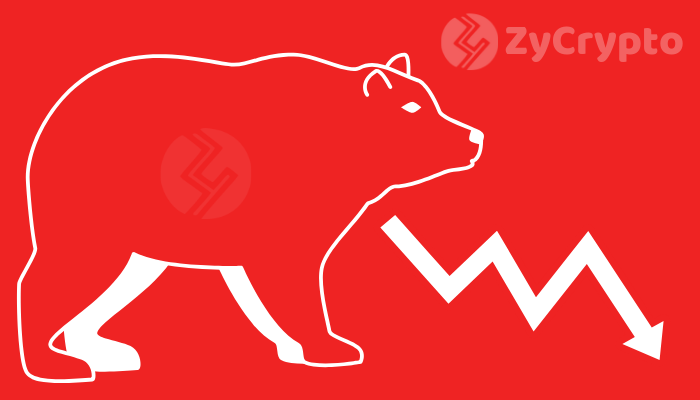 The bearish market has left traders in absolute shock as the world’s largest cryptocurrency, Bitcoin has been dragged beneath its shoulders, leaving the entire crypto community in a total frenzy. For the second time in the year 2018, Bitcoin has lost its propulsion and has fallen below the $6,000 mark to sit unsteadily at a trading price of $5,798.

The market has been experiencing severe losses since the week began. As of yesterday, only 18 tokens closed with slight gains which were eventually lost after a span of 24hrs, but things have escalated to an even more alarming state as the big bull suffered an intense blow today and decline by over 9.03%. Bitcoin opened at $6,337 as of yesterday, leveled at 6395.27 for a very short period and declined to 6342.67, the big bull later closed at 6359.49.

Market capitalization in the last 24hrs which was up to $110 billion has now drastically dropped to $100 billion. On October 15th, Bitcoin was close to losing its grip on the $6,000 level when it opened at a trading price of $6,292 and fell even further to trade at $6,258. The token was quick to make a swift comeback on the same day and moved up to $6,500, a trading price that later surged to reach a daily all-time high of $6,673 the next day.

Bitcoin experienced its first all-time low for the year back on February 6th when the token’s price dipped at $5,947 and further drowned to $5,937 in June.

Ethereum as expected, have also followed suit by shedding a sizeable 11.70% with its trading price stumbling from $207 to $183.

As of this writing, only four tokens are recording slight gains, including Paxos standard token (PAX) which is soon to be listed on Binance Uganda.