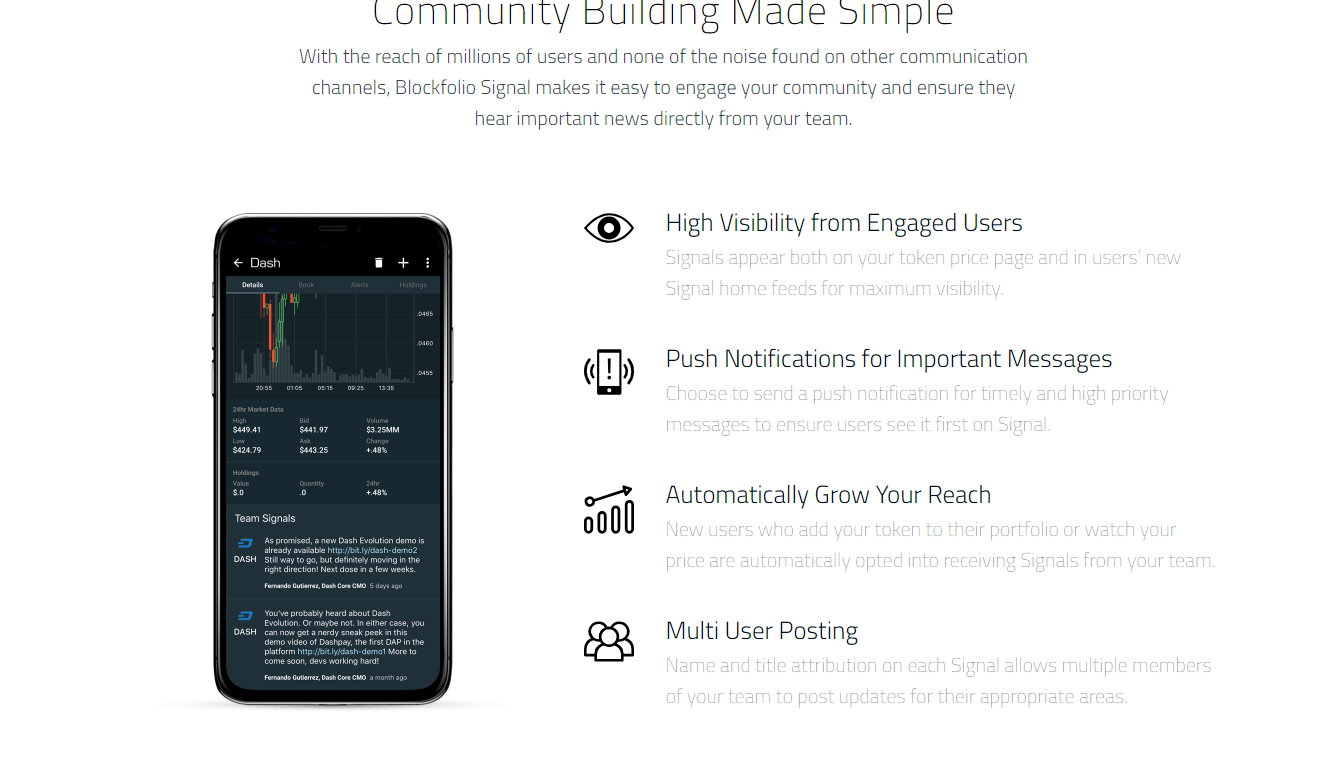 On May 10 of 2018, Blockfolio announced the beta launch of ‘Signal’, a communication platform that has been designed from the ground so as to tackle the growing misinformation problem in the crypto ecosystem.

Blockfolio is a major cryptocurrency portfolio tracker. The company currently serves over 4 million crypto enthusiasts globally. Signal different from the other channels as they are directly integrated into the Blockfolio app.

The platform would address the present needs of the existing ecosystem wherein other communication channels are now increasingly bombarded with spam, scams, and unverified data. Signal envisages solving this by ensuring a scalable, verified way for leadership teams so as to facilitate direct communication with the token holders.

The token team who has registered for the Signal Beta can now broadcast direct update “Signals”, starting May 10.

This broadcasting is facilitated through the Blockfolio network and reaches the users who either hold or track their coin.

It is delivered via personalized fees and pushes alerts to the Blockfolio user. It facilitated them in receiving the crucial updates on the tokens specified in their portfolios, that too directly from the source without dilution or delay in information.

Ed Moncada, the CEO of Blockfolio has said that “With Signal, we mainline important team information directly to users. Signals come straight from the token team leadership, free of the noise and toxicity that we so often see in the current communication channels used by the global crypto community…  Top token teams have recognized a need for this solution and we’ve invited the best of the best to be launch partners and help us shape the future of our platform. It’s an exciting moment for us because this unique enhancement allows us to become the trusted communication network in the rapidly evolving blockchain industry.”

In order to ensure and uphold the higher standards of transparency and accountability, the Signal Beta’s first invitees include Decred, Dash, Quantstamp, ICON, Keebler Network, Civic, and others

“Dash Core Group is proud to be part of the Blockfolio Signal beta. Blockfolio Signal provides a valuable channel for Dash to reach its followers directly and without noise. We are now actively testing and learning how best to leverage the platform.” The CEO of the Dash Core Croup, Ryan Taylor, has said.

Loi Luu, CEO of Kyber Network, has commented that “Blockfolio’s Signal provides an excellent platform for users to keep up-to-date with projects with critical information directly from the project teams. Kyber Network has benefited immensely from Signal, as it allows us to reach our followers more directly and effectively with minimal effort. From our recent mainnet launch to important token pairs listing announcements, we went with Signal as the first platform to disseminate the information to our community.”

Vinny Lingham, Civic Co-Founder, and CEO has also quoted that “We’re happy to be part of the first batch of teams using Signal and our community has had a very positive response to the first Civic Signal we sent out.  With Signal, the Blockfolio team is delivering on its new mission of tackling the issues around misinformation and communication in crypto. With millions of global users, and CEO Ed Moncada, as a founding board member of top cryptocurrency Dash, providing first-hand experience and a deep understanding of the needs of the token teams, Signal is set to be a key communications channel for token teams.”

Further, Blockfolio has announced that there would be a raise of a $3 million seed round from premium investors including Playground Ventures, L2 Ventures, and DCM Ventures.

They have also announced a raise of $1.7B venture fund with investments across the globe, including in major crypto markets like South Korea, Japan, and China. The funds are allocated to further pursue the development of the ‘Signal’ and further onboard more of the 3,000 token teams that have partnered with Blockfolio.

The team is currently inviting token teams to join Signal Beta. The token teams who are interested can now get the Signal Beta by visiting blockfolio.com/beta so as to join the waitlist. Currently, Signal is available on Blockfolio since May 10 on both the App Store and Google Play.