After many days of hovering below $8,000, Bitcoin has finally made a move above $8,200, a significant resistance that it just broke. Not just that, it has reached a new 2019 high of $8,600. The leading cryptocurrency attained this price just a few minutes ago following a great and sudden move. 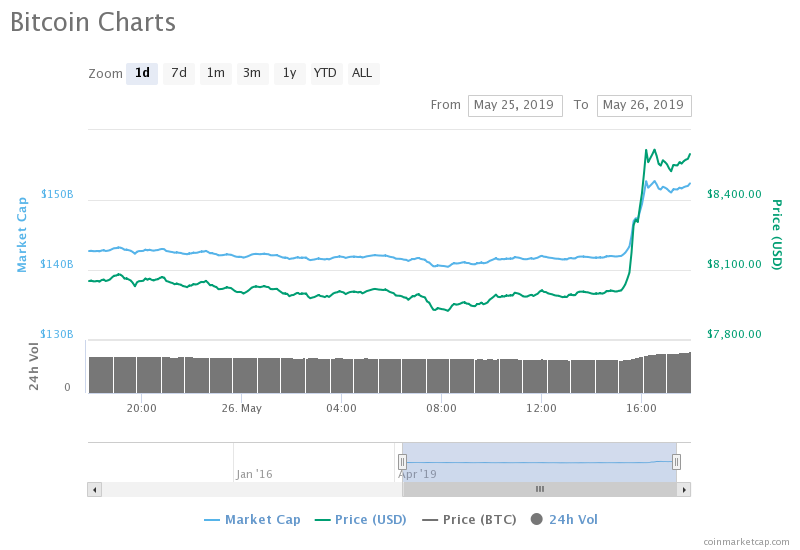 Analysts are looking at $9,000 as the next destination for Bitcoin if the growth continues the way it started. The cryptocurrency has been down below $7,000 for over a week now, hitting $8,000 randomly several times. This actually raised fears of the asset dropping below a critical $7,600, which would have been the start of a much lower fall, analysts said.

One analyst recently said Bitcoin will see another big move if it succeeds in reaching a price of $7,950. Bitcoin got to this price and rose to $8,000 a number of times but was able to experience the big move only today. Bitcoin has currently gained 120% so far in 2019 and it keeps pressing on.

Bitcoin was on a steep and fast rise prior to the dip below $7,000. Traders and analysts at the time expressed doubt that the bull run was going to be that fast even though Bitcoin was certainly going to embark on a bull run. Seasoned trader Peter Brandt said the asset would have to slow down and rise slower in order to sustain the bull run.

The price later crashed as predicted but has held its position above $7,500 all the way before the new, sudden move. According to a senior analyst at eToro Mati Greenspan, Bitcoin breaking through the former yearly high means the coin is heading straight to $20,000 without any resistance.

If his words turn out to be true, the 2017 all-time high may become a walk in the park for Bitcoin in just a few days and a higher all-time high is still possible after that. There are several opinions on where Bitcoin will stop next, but one thing everyone seems to agree with is the fact that a bull market is officially here for Bitcoin.