Bitcoin after having two of its best months since the crypto boom of 2017, is now back in a downward trend. Although the current drop has been a big hit for investors, a sell signal indicates that there could still be more losses ahead.

According to the GTI Vera Convergence-Divergence indicator, there could be more drops in the coming days. This indicator shows positive and negative trends and for the first time since April, it has signaled sell.

The market seems to be struggling to find stability having previously tried to hold above $8,500 and $8,000. As one analyst noted, the sudden shifts in sentiment are seeing the market experience one of the worst volatile periods. Jake Stolarski, senior trader at Cipher Technologies stated that:

“People are seeing where the resistance is, where the stops are both up and down, People are trying to find a stabilizing point where they can layer into a core position.”

Since Tuesday, Bitcoin has fallen by more than 12%, pulling back to around $7,800 at the time of press. At the time of press, Bitcoin has just bounced from a low of $7,500 in the last few hours. Will this support position hold? The current shift in trends means that the market is in dire need of positive news for it to bounce back up and avoid a retest of key support positions. Without some positive development in the industry, Bitcoin will struggle to develop positive momentum. 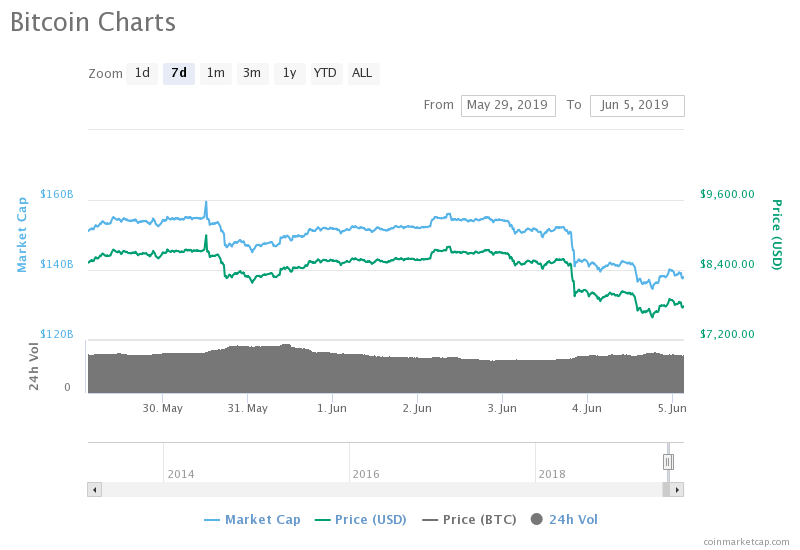 Another Chance To Accumulate Before $10K?

For some analysts, this is yet another chance for investors to buy in before Bitcoin finally climbs to $10K.

While this could be the case, analysts having had predicted a pullback as we approach $10K before another surge saw prices hit this target, there is no guarantee that the asset will follow the predicted path.

For instance, analysts were expecting the huge pullback to come after the asset crossed $9,500 but it barely touched $9,000.

The recent dump which we reported could have been triggered by a whale who moved around 25,000 BTC from a private wallet and into Coinbase wallet could have “manufactured” to pocket some profit.

According to reports, after selling the BTC, the whale bought it back, pocketing relatively $10 million. By playing the system, this whale was able to create panic before buying back when prices had dropped. This was yet another “manufactured” bear market that saw retail investors get caught out and their billions wiped out.