Bitcoin’s performance in the last 24hrs has been a significant one and this is reflected in the big bull’s ability to make a sheer climb that has now placed it in the $4100 mark. More precisely, Bitcoin is currently trading at $4157 at the time of this writing. This is even more impressive as Bitcoin seems to swiftly be heading to the nearest resistance level of $4200. 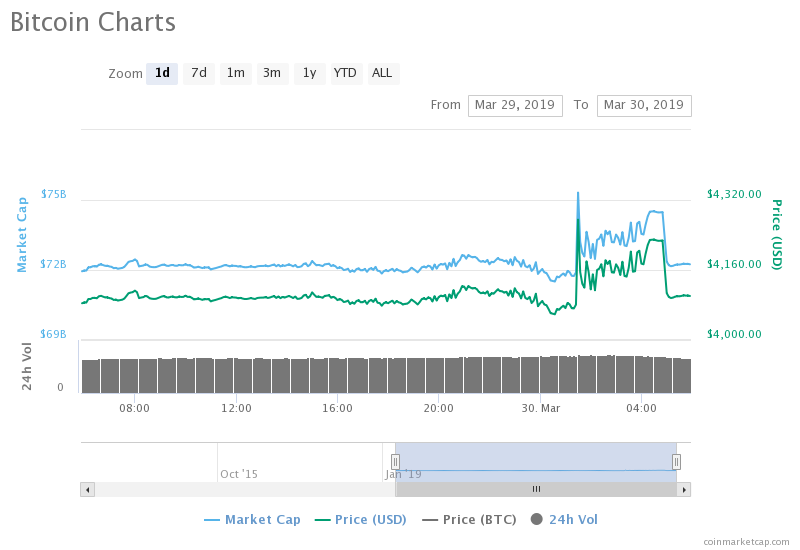 While the current structure of the cryptocurrency market is showing itself to be highly promising, the early hours of yesterday was a rather risky one for both top dogs and altcoins.

With slight bearish trends surfacing, altcoins attained losses between 2% to 5%. Bitcoin was not left out, although having only attained very mild losses (0.5% to 1% against the USD), the big bull had barely managed to remain above the $4k mark with an opening trading price of $4068, while a daily all-time high of $4113 was attained shortly into the day, the bears suppressed BTC lower than its opening price as the coin fell back to $4,034 and later closed a little higher with $4,098.

The weekend is showing itself the most promising for Bitcoin. Yesterday’s price of $4,113 is the second highest price Bitcoin has seen for the month of March, following its current trading price which has now set itself for the $4200 mark.

The possibility of this is unquestionable as Bitcoin had previously hit this level back in February when the big bull initiated at $4,145 and went on shortly after to hit its first yearly all-time high of $4,210.

With the weekend beginning on a bullish path, Bitcoin is already up by 4.32% at the time of this writing. An increase of $2 billion to its market cap communicates that traders are pumping big into the big bull.

While weekends are usually a fair trade as the market tries to find balance, the bulls have decided to input a little more green lights and a little less red lights as gains continue to pour in.