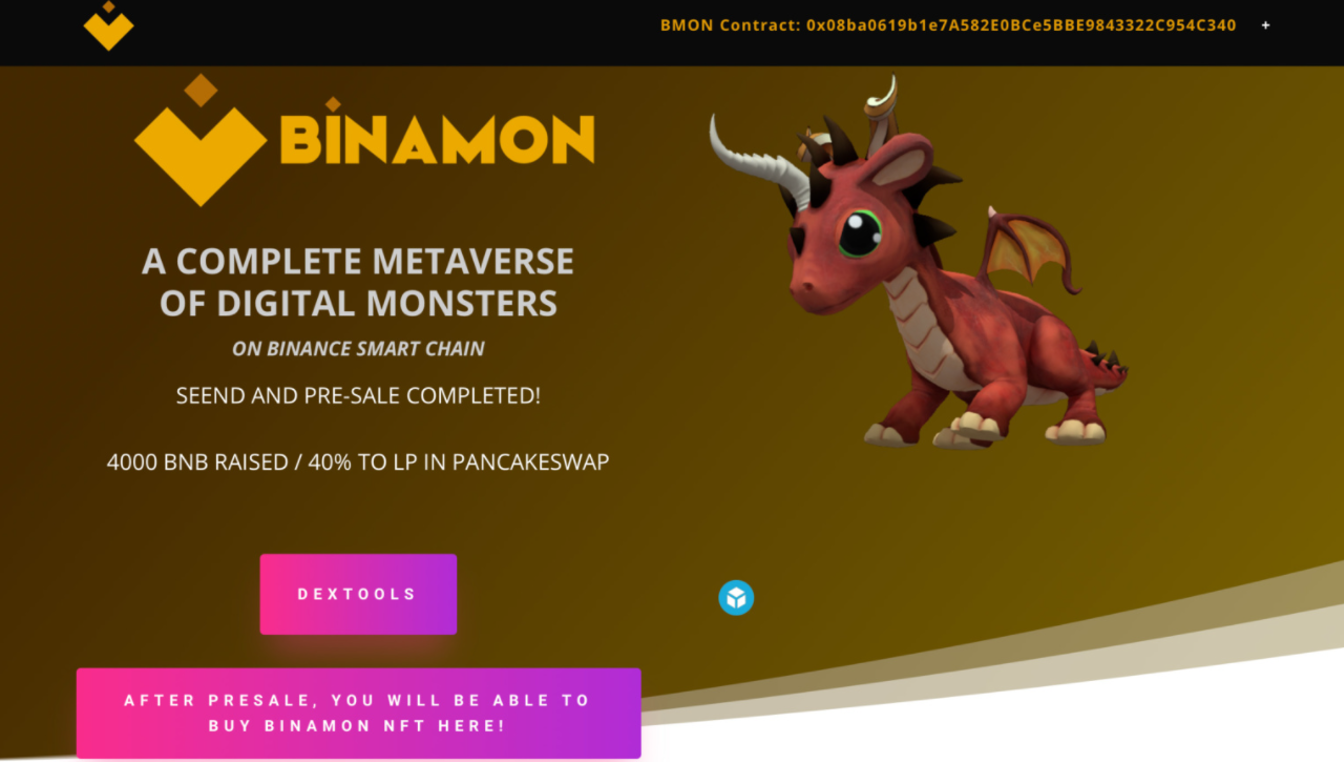 Gamers can enjoy fighting their unique virtual creatures leveraging the Binance Smart Chain blockchain and reap rewards as their dragons, hippogriffs, unicorns, and other monsters win battles that are easy and fun at the same time. In 48 hours, Binamon became the ERC-721 token with the most operations on the Binance Smart Chain, representing a huge leap forward in uptake and promise for the project.

Binamon is not just another blockchain game, but a complete metaverse that has existence in a virtual world and the real one. The gaming platform offers players to buy unique and different creatures, with the ownership represented by NFTs. At the same time, owners are delivered a physical version of their creatures to their homes.

Battles happen in a smart contract, where players wager the Binamon native BEP20 BMON token. The smart contract algorithmically determines which of the monsters will win through the critically acclaimed Unreal Engine using four different characteristics:

The smart contract burns a very small amount of BMON for a battle to commence. A winner takes all, fights are ensured to be fair by matching similar strength creatures. Weaker monsters are incentivized however by a higher reward than others in case they win.Binamon also has a multiplayer mode with many adventures that gamers can play for hours.

Minting Monsters and Other Benefits

Binamon has a dedicated smart contract called Booster that is used to create the NFTs that represent the creatures. Players will deposit the required BMON token in the contract and it will use a randomizer to mint three different Binamons, each with different characters and powers. Should players require a physical version of their NFT based monsters, they can always order one and it will be delivered to them.

At the same time, users of the Binamon platform can create ingame assets. These assets will be different items that can be coupled with the monsters to increase and enhance their powers. Players will also have the option to sell items and assets they create or no longer need, creating a whole new economy and a way to earn.

Binamon will also hold a lottery at different times. Players who participate will have a chance to win specific upgrades to their monsters and enhance their chances of winning battles.

The Binamon mobile app will also serve as a digital wallet, where gamers can store their BMON tokens and access the battles and marketplace to buy, sell and trade their creatures and items. Binamon will also leverage DeFi and the NFTs representing monsters can be staked for passive income.

With a unique approach towards fantasy gaming, Binamon not only offers a game where players can live out their fantasy of battling their creatures against others, but also earn and even own a real world action figure, transcending the boundaries of the digital world and stepping into a metaverse.

To find out more information, visit the Binamon website: www.binamon.org