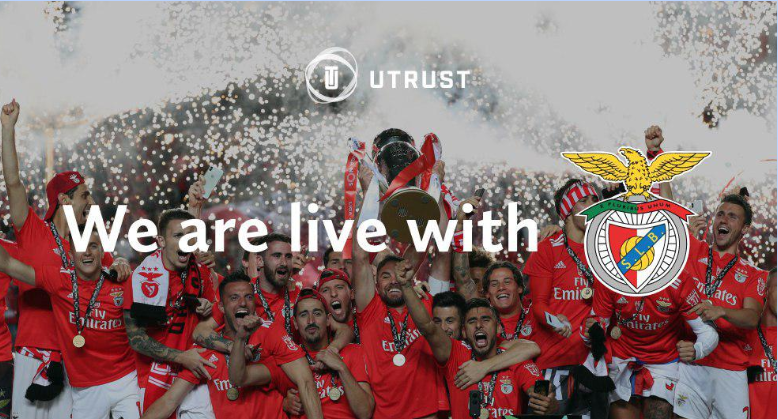 UTRUST, a leading cryptocurrency project has inked a partnership deal with S.L Benfica, the Portuguese Primeira Liga champions, to enable supporters of the club purchase tickets and merchandise with cryptos on the Benfica website.

The deal has made Benfica the first major European football club to accept cryptos as a payment method.

With over 14 million fans globally and a digital fan base of over 7 million followers on social media platforms, S.L Benfica is among the most passionately-supported football clubs in the world.

S.L Benfica is the most decorated football club in Portugal, winning the competition for a record 37 times.

With the partnership with UTRUST as its cryptocurrency payment partner, the club will now be able to revolutionize its e-commerce strategy and expand its global reach.

It would also attract more Portugal-based cryptocurrency holders as well as those abroad to the club‘s home ground of the Estadio da Luz.

UTRUST has transformed the world of finance and payments by offering users instant crypto-to-fiat conversion.

The partnership will also grant Benfica more customers, as fans will now have a significantly enhanced online experience through the implementation of novel technologies.

“This is an exciting day in the history of S.L. Benfica as we announce our decision to accept cryptocurrency payments. Our benfiquistas make Benfica the unique and special club it is and we recognise that many of our supporters are now digital users first so we want to be ahead of the curve when it comes to adopting new technologies and giving our supporters the best online experience.”

UTRUST technology will enable Benfica to leverage the increased security and borderless nature of crypto payments while also eliminating the risk of market volatility for the club.

Benfica will also be able to settle payments directly to its bank account in fiat, on the same day the payments are received.

Supporters of Benfica will be able to pay with UTRUST’s UTK token as well as bitcoin and ether.

“This partnership with Portugal’s number one football club marks a major milestone for UTRUST and the blockchain ecosystem as a whole. Benfica is one of the biggest sporting clubs worldwide and we are delighted to be making cryptocurrency payments possible for their 14 million supporters around the world,” said Nuno Correia, UTRUST  co-founder and CEO.